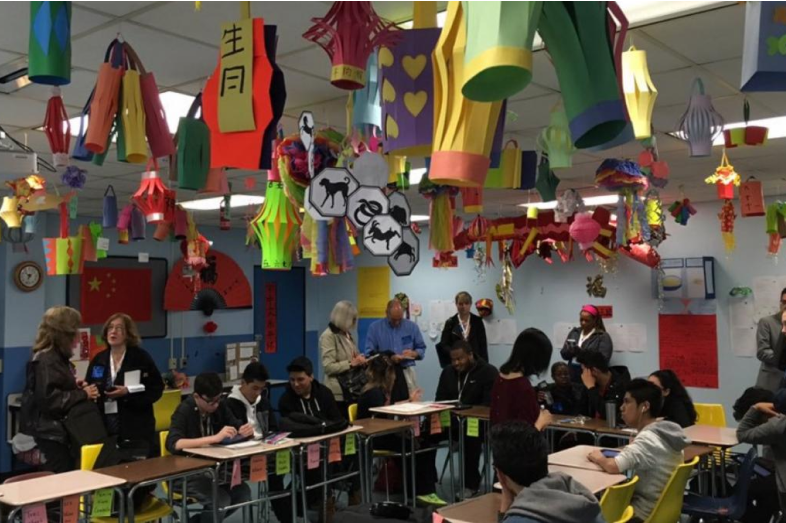 For Nancy Barile, who teaches English at Revere High School, turning around a reluctant reader meant turning on her own TV.

The student wouldn’t read or do homework, Barile said, but he was “obsessed” with The Walking Dead and urged his teacher to watch the program. So Bartile, who has taught at Revere for 21 years, made a deal: She would watch the TV show if he would read.

“He said, ‘I’ll make that deal,’” Barile told a group of education journalists visiting the Boston-area high school in May.

As a result, the student read, and the teacher got hooked on the show about a rag-tag band of survivors fighting off a zombie apocalypse.

This fall, Barile will teach an elective on “The Walking Dead,” tying it in with comic books, mythology and current events. Sixty-five students want to take it. Even the visiting journalists — attendees at the Education Writers Association’s National Seminar in Boston — had suggestions about what she could include in the course.

That’s one example of the student-centered learning approach that has been attracting attention at the only regular public high school in Revere, a city five miles north of Boston. The school has been attracting attention since it was honored for excellence by the National Center for Urban School Transformation at San Diego State University in 2014.

The 1,800-student high school serves a largely disadvantaged population. About three-fourths of students come from low-income families. Just over half are Hispanic, and for 58 percent, English is not their first language.

Recent data, however, suggest Revere High is beating the odds. For 10th graders, 91 percent scored proficient or better in English language arts on the state test, 74 percent in math, and 72 percent in science, based on 2015 dta. Its four-year graduation rate is 90 percent. The school emphasizes restorative practices and has an out-of-school suspension rate of 2 percent.

The visiting journalists met in the learning commons – the name for the library — with students, teachers and administrators, including Revere Public Schools Superintendent Dianne Kelly. The reporters also toured the school and observed classrooms, stopping to talk with students except for those focused on their AP calculus final. Nearly 300 students at Revere are enrolled in at least one AP course.

Garcia, who took over the school’s helm in 2010, said that if a principal can’t change student achievement and campus climate for the better in three years, that person should “look for another job.”

Garcia and the staff — which already was looking at enhancing social and emotional learning before he arrived —  began by changing from the seven-period day to a block schedule of four 80-minute periods each day. That provided a launching pad for new approaches. Now, students generally take eight classes a year. Teachers generally teach three periods a day and have one period to prepare.

Under the old system, too much time was spent starting and stopping each period, reducing instructional time, according to Garcia. “The schedule was not working,” he said.

The school also uses the “flipped classroom” model in which students outside of class watch videos or do other assignments aimed at introducing the next day’s lesson. After completing the homework, said Revere student Samantha Karl, students walk into class knowing what they need help on and what they understand, enabling them to move onto the next material sooner.

“We get to pave our own path,” she said.

One factor that makes flipped learning possible is a one-to-one iPad initiative. Students can take the iPads home and access the school’s learning management program, Schoology, if they have Internet service at home. They also can access the internet on wifi hotspots throughout the community, including public libraries and municipal buildings. Students are also able to make use of the learning commons, which is open before and after school.

Garcia said the school’s curriculum is aligned with a core tenet of student-centered learning: “making sure not just adults dictate what’s going to be taught.”

For example, Christina Porter, the school’s director of humanities, said students generated seven potential topics for senior English, and, after a junior class poll, three were chosen. In a U.S. history classroom, Lisa Hart teaches a framework of topics on the Cold War, but when the class went deep, students chose to spend more time on the Cuban missile crisis than on Vietnam.

Lectures are minimized at Revere. “Certainly there are times the teacher needs to directly instruct or lecture, but a lot of the methods you see here are student-centered, kids in small groups, kids in teams talking to one another,” said Porter.

Garcia said the school has been working on ways to better develop relationships between teachers and students, such as through advisory groups.

“We wrap around the child, and we support the child the best we can,” Garcia said.

Kelly acknowledged Revere’s program is expensive and represents a significant investment of both public and private dollars. District funds initially were used for the turnaround work, including buying iPads and increasing staff to support the block schedule.  As the school gained attention, it has received extra support, including a grant of about $1 million a year for three years from the Nellie Mae Education Foundation, which is based in nearby Quincy, Mass.

For student Samantha Karl, the approach at Revere works so well she made this suggestion: “I would be cool with having a longer school day to be able to take more classes.”