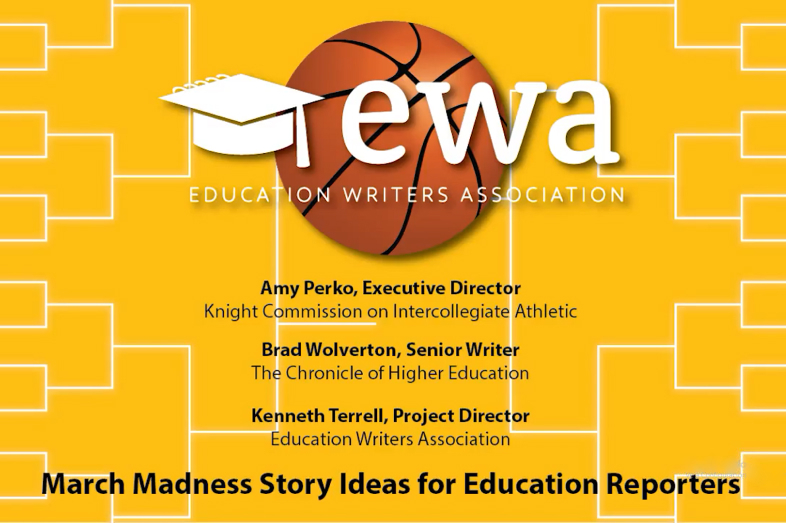 It’s that time of year again, but why should sports reporters have all the fun?

With more than 100 colleges and universities competing in the men’s and women’s NCAA basketball tournaments, there are plenty of topics education reporters can explore about how athletics affect life on campus:

EWA explored these ideas along with other story possibilities and resources to help you report them quickly with insights from Amy Perko (executive director of the Knight Commission on Intercollegiate Athletics) and Brad Wolverton (senior writer for The Chronicle of Higher Education).

Are commercialism and higher education compatible?
NCAA says yes, arguing that its amateur model requires players to prioritize education over sports. (The NCAA requires teams to meet a minimum 50% graduation rate to qualify for March Madness.) Congress isn’t convinced. Federal lawmakers have scrutinized the NCAA, arguing, among other things, that it has failed to enforce its academic standards and done a poor job of preparing players for life after sports. The NCAA also faces scrutiny over its failure to provide due-process protections for players and its lack of health protections for athletes.

Two former UNC basketball players are suing in state court in NC, claiming that the university defrauded them of a legitimate education. Behind the case is Michael Hausfeld, the lead lawyer in the Ed O’Bannon case, involving the commercial use of players’ images.

Other Challenges the NCAA Faces

Tourney Itself
Business or Issues-Oriented Stories Around It

Short color pieces from The Chronicle