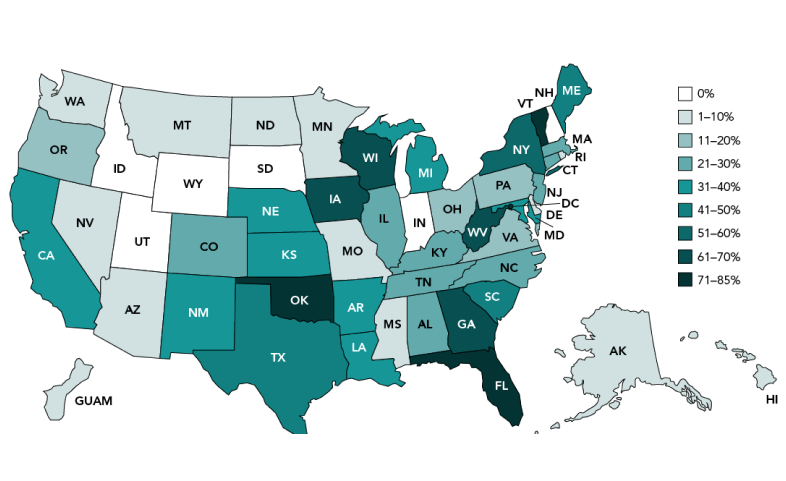 The State of Early Learning in Your State

A pair of new reports shed light on the well-being of children across the U.S.

The best way to predict the future is to look at how children are faring. But the task is complicated given that the well-being of children varies widely from state to state.

That’s what data presented by researchers Sarah Daily of Child Trends and W. Steven Barnett of the National Institute for Early Education Research at Rutgers University show. The duo offered their takes on the state of early care and learning across the United States at the Education Writers Association’s 2019 annual conference in Baltimore.

There are some bright spots to report:

More than 90 percent of infants and toddlers received regularly-scheduled medical care in the last year, according to the State of Babies Yearbook: 2019, produced via a collaboration between Child Trends, a research center, and Zero to Three, a nonprofit that supports early childhood development.

Universal preschool programs for three- and four-year-olds exist in Washington, D.C., Vermont, Florida and Oklahoma, according to the annual NIEER State of Preschool Yearbook. And some cities, including San Antonio, Houston and New York City, are outperforming their states in expanding programs.

The two reports come as governors across the country seek to invest billions of dollars into early childhood education, as panelists discussed in another session at EWA’s National Seminar. In California, Colorado, Illinois, Oregon, and Washington, governors have each proposed more than $100 million in new state funds for early care and education programs, according to the Center for American Progress, a liberal-leaning think tank.

Despite the potential for new investments, Barnett and Daily said their reports show significant areas of concern remain.

Many infants and toddlers are not covered by health insurance, and that number is growing, Daily said. In addition, toddlers are the most abused and neglected of any age group, and too many babies face food and housing insecurity and are witnesses to violence.

Barnett of NIEER noted that in some states, preschool programs turn away too many children, and that preschool teachers are paid so poorly that about one quarter of them qualify for food stamps.

A number of states that claim to have universal preschool are, in reality, turning children away from programs, Barnett said. Washington, D.C., Vermont, Florida and Oklahoma have genuine universal programs. “If you are 4, you can go,” Barnett said.

But in Georgia, Iowa and New York, claims of universal programs are not necessarily true. “If you are not the first in line, tough luck,” Barnett said.

Finding Stories in the Data

Both yearbooks provide a wealth of data for reporters looking to learn more about their states’ youngest learners. The NIEER preschool yearbook is based on a survey of 200 questions filled out annually by state administrators of early childhood programs for the 2017-18 school year.

In the State of Babies report, researchers ranked states on the well-being of infants and toddlers based on dozens of health, education, and child development indicators. The national picture shows that states in the South are more likely to rank in the bottom tier, while those in the Northeast typically land in the top two tiers.

Only seven states have a paid family leave program and only 11 require employers to offer paid sick days that cover care for children.

When it comes to infant mortality, the state with the lowest rate in the State of Babies yearbook was New Hampshire — 3.7 percent in 1,000 births — while the highest rate — 9 in 1,000 — was found in Alabama. Infant mortality was far more prevalent among babies of color.

During the panel, Daily emphasized the urgency of providing families with the information and resources they need to care for and support their children during the critical early years.

“Surprisingly few parents report that they read or sing to their children on a daily basis,” Daily said. Many states have developed campaigns about how important this is early in life.

In 28 states, the cost of infant and toddler child care is more than the cost of college, creating a “huge burden” for young families, Daily said. Nearly 1.6 million children, ages 3 and 4, are in preschool programs nationally. Most of the programs are for four-year olds, Barnett said.

But just how many children are served in each state is uncertain.

“While billions of dollars are spent on state-funded preschools and by Head Start programs, it’s hard to find out how many slots are available and how many children received a year’s worth of service,” Barnett said.

Data for the 2017-18 school year, the most recent available, shows there are 62 programs in 44 states and Guam. But six states have no programs, and some have multiple programs, according to NIEER.

Twelve states met fewer than half of the benchmarks, including California, Florida and Texas. Those three states include about a third of the vulnerable children in the U.S.

Barnett said reporters can find stories in which states are moving forward and which are falling behind in providing preschool programs. Other stories reporters might pursue include examining differences in state policies for early learning, as well as comparing and contrasting who attends publicly-funded preschool in different states.

For instance, Barnett said, a study of preschool in North Carolina showed that, on average, about half of eligible children attend preschool. But the numbers varied widely from county to county. In some counties, more than 85 percent attend, while in others, less than 15 percent attend. According to the report, the most underserved population in North Carolina is urban white children.

The challenges facing the preschool workforce are another focus of the NIEER report. Preschool teachers in public school programs typically make about $7,000 less than K-12  teachers, while those in private programs may make as much as $18,000 less.