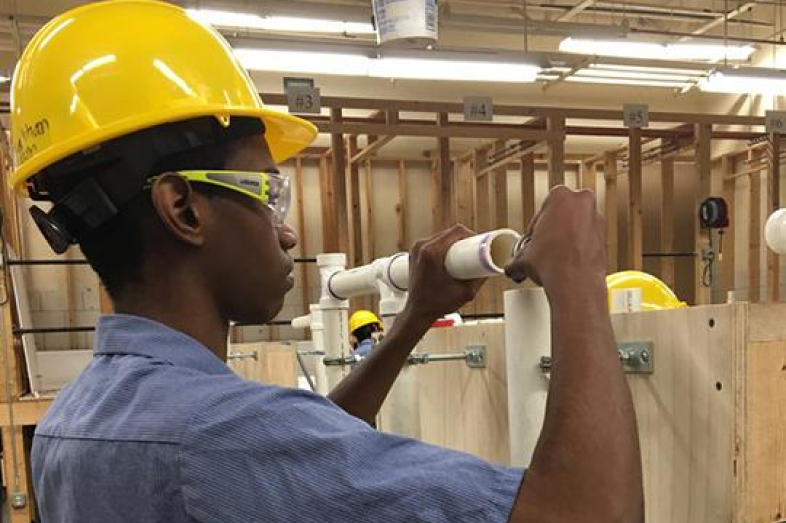 A School Where Career Training and Academics Go Hand in Hand

Leonard Ferguson is having the last laugh. A senior at the Western School of Technology and Environmental Science in Catonsville, Maryland, he’s on track to graduate this spring with both a good job and his continuing education paid for.

Ferguson makes $29 an hour working as a plumber’s apprentice for the mechanical contracting firm G. E. Tignall & Co. The first year of his apprenticeship is complete, and he will go on to trade school with the financial support of ABC Greater Baltimore, also known as the Associated Builders and Contractors. If all goes according to plan, he will earn journeyman status by age 21 and become a master plumber at 23, on track to open his own business.

Plumbing is not a popular field at Western Tech — none of the other members of his graduating class chose that particular track. But as far as he’s concerned, the joke’s on them.

Located in an old vocational training center in Catonsville, nine miles west of downtown Baltimore, Western Tech is one of three career and technical education magnet high schools operated by the Baltimore County school district. (Other district schools offer some CTE classes.) Demand is great: The school is at maximum capacity, enrolling some 900 students from all over the county, according to Principal Murray Parker III.

A small group of journalists visited Western Tech in May as part of the Education Writers Association’s annual conference, which took place in downtown Baltimore.

Western Tech’s 11 career pathways include health sciences, automotive service technology, environmental technology and sports science. In several tracks, students graduate with both a high school diploma and an industry-recognized career certificate. Students complete an interest assessment at the start of high school and then apply for up to three tracks.

In addition, there is a Communication Learning Support Program that serves 13 students with autism who receive special education transition services, programming designed to prepare them for as much independence and workplace preparation as possible.

Western Tech recruits in middle schools throughout the district. Students must apply for admission. Requirements include a GPA of 2.5 (on a five-point scale) in seventh grade and the first quarter of eighth, as well as good attendance and proficiency in eighth-grade math and reading. The district provides transportation, as it does for all of Baltimore County’s 114,000 students.

In the 2017-18 school year, 63 percent of Western Tech students were African American, 17 percent Asian and 4 percent Latino. Thirteen percent were white, and the balance two or more races. Economically disadvantaged students (as defined by eligibility for a free or reduced price lunch) made up 30 percent of the student body last year, down around 5 points from recent years and below the district rate of 44 percent.

Attendance and four-year graduation rates are high, with an average daily attendance rate of 95 percent last year and more than 98 percent of the 2018 class graduating on time. In 2014, Western Tech was one of 48 high schools recognized as National Blue Ribbon Schools by the U.S. Department of Education. Last year, The Washington Post recognized it as one of “America’s Most Challenging High Schools.”

Coupled with a growing concern that a four-year college degree is no longer an affordable path to the middle class for some students, the Perkins Act has focused renewed attention on the need to create high-quality alternatives. Education and workforce development officials throughout the country are determined that, unlike vocational-technical programming offered to previous generations, today’s CTE programs equip participants with the academic knowledge needed to compete in a rapidly changing labor market.

Western Tech has had a career and technical education focus for decades. But when Parker took over as principal eight years ago, he began pushing students to take the most challenging academic classes alongside their career-preparation courses.

“It’s not a lower track, it’s a career track, and we had to make sure the academics matched it,” he said. “We needed a goal, an academic goal.”

Parker and his team settled on student participation and achievement in Advanced Placement classes as an internal target. The school’s own “equity and excellence” rating measures how many members of each senior class take and pass AP exams. Students can take more than one test, but only one counts for purposes of determining the rating.

Last year, for example, Western Tech staff determined the school earned a 58.5 percent on the equity and excellence scale. Broken down, that means 649 AP exams were given to 319 students, with a pass rate of 82.6 percent. The rating has ticked up and down over the last five years, with a low of 49 percent in 2017 and a high of 60 percent in 2014.

“We wanted to have a goal that meant something,” Parker said. “We wanted our students to compete with kids across the country.”

The need for academic skills is readily apparent in Western Tech’s CTE classrooms — most of them large spaces filled with cutting-edge equipment and staffed by hard-to-find master craftsmen who are willing to take what’s likely a pay cut to teach.

In the mechanical construction and plumbing space, for instance, a group of 10th graders recently was tasked with completing a project involving drains, waste, and vents. Students had to prepare both a flat sketch of the pipes they would be fitting and an isometric view — a drawing done at a 30-degree angle. The surface they were to assemble their pipes and fixtures on had a quarter-inch slope, meaning they would need a precise calculation to make things fit, including an air intake to prevent sewer gas buildup.

Monitoring Water Quality in the Chesapeake

The school owns three yellow buses, and a half-dozen staffers have the commercial licenses required to drive them. This allows Western Tech to transport students to local community colleges with career programs that match the school’s pathways and to get students off campus for hands-on experiences.

Environmental sciences students, for example, every year engage in a project that looks at the water quality in the Chesapeake Bay. In addition to using geolocation technology to map surfaces that affect the runoff and streams that feed into the bay, students grow wetland grasses to plant along the shore and raise bluegill and rockfish to release.

Angela Beverly is a junior in Western Tech’s Academy of Health Professions. Like Ferguson, she has a carefully thought-out plan for her future. Beverly started on the health care track thinking she wanted to be a physician, but seven five-week rotations at the University of Maryland R Adams Cowley Shock Trauma Center, a free-standing hospital in downtown Baltimore, changed her mind.

“When I saw more, I decided I wanted to go into nursing because it’s more hands-on,” she said.

Beverly’s plan is to graduate from college with a bachelor’s degree in nursing and a minor in business management, work for a couple of years and then continue on to become a nurse practitioner. Nurse practitioners earn more, she explained, and can practice in different settings.

In eighth grade, Beverly applied to three Baltimore County magnet schools. She didn’t get into the two nearest her home on the east side, so she crosses the county every day to get to Western Tech. The trip, she said, is well worth the time.

“I would not have had the experiences I’ve had here anywhere else,” she said. “The internship opportunity is one of a kind — and amazing.”

Share
Author
Beth Hawkins
of The 74 for EWA
x