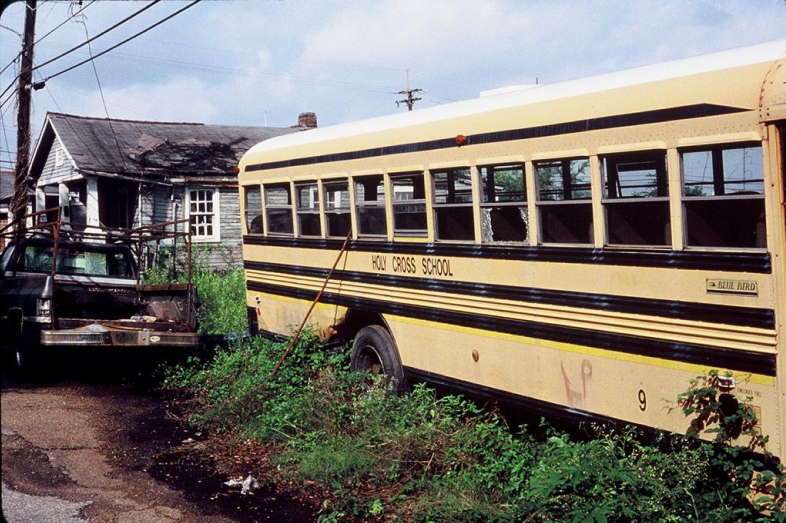 A decade after the floodwaters of Hurricane Katrina ravaged New Orleans, the city continues its struggle to recover. Most of the local public schools were replaced by (public) charter schools in the wake of the storm. This dramatic shift in the city’s public education “system” is firmly in the national spotlight as an ongoing experiment in school choice and reform.

With this week marking the 10-year mark since Hurricane Katrina,, news outlets are engaging in some anniversary journalism to take stock of the impact on public schooling in New Orleans.

Education Week applied its trademark close lens to the city, examining how the storm’s damage, and the aftermath, led to a massive overhaul of the public education system, and the human toll that’s taken on the city’s education community. There’s a particular focus on how the wake of the storm was particularly devastating to the city’s veteran black educators, like Billie Dolce:

“A decade later, the pain and symbolism are as profound for Dolce as they were in the storm’s fresh wake.

“Death sticks out to me,” the former special education teacher says. “Death from the storm, death of a school system, death of my career.”

Just five months after floodwaters engulfed her home in New Orleans East, Dolce, living in Dallas, got walloped again. She was fired. After more than 30 years of teaching, she, along with almost every one of the 7,000 employees of the New Orleans public schools, was dismissed.”

The Education Week team looked at what happens when charter networks replaced traditional public campuses, how families are often bewildered by the plethora of educational options — some of questionable quality —  and the murky metrics on whether students are, indeed, better off academically than they were in pre-Katrina days. (That’s a sensitive topic to broach: U.S. Secretary of Education Arne Duncan was chastised for once suggesting the storm was “the best thing” to happen to the city’s public schools.)

Over at the New Orleans Times-Picayune, reporter Jessica Williams offers a candid first-person piece on the public schools, and her own uncertainty about where to send her son. While the number of subpar campuses is shrinking, there still aren’t enough seats at the more popular, higher-performing schools, Williams says:

“When I attended a lottery at a New Orleans public school some time ago, I could tell the pickings were slim by the number of cars wrapped around the block. The cafeteria was packed with meticulous parents who had completed the precise admissions requirements to the letter, and who were now ready to trust a bingo cage with their child’s shot at a great education.”

In a city school system with so many options, having the right information is key. Earlier this year, an Education Writers Association webinar featured the publisher of a printed guide about each school in the city to help parents and guardians who can’t access the Internet.

The New Orleans Advocate Katrina anniversary story depicted the schools’ makeover as producing both impressive results and vociferous recriminations. It’s impossible to separate the education system from the hard realities of the storm’s devastation on the broader community, including housing, employment, and the reported corruption that ensued in the rebuilding of the community. The newspaper’s reporting is certainly worth reading for the important context it provides.

The NPR Education Team spent significant time in New Orleans over the past year, talking to students, families, and educators about the changes and what means to bring an end to neighborhood schools:

“Right now in New Orleans, there are virtually no teachers unions. Hundreds of teachers have alternative certifications, including many from Teach for America. Donors have poured in millions of dollars — and a lot of outside influence. There is a huge emphasis on data and testing, along with roiling controversies over special education, discipline and English-language learners. And a state-level political fight over the Common Core.

Amid all of this, in the past five years, the city has posted the largest, fastest improvement in test scores ever produced in an urban public school system.”

Indeed, in a recent study, Tulane University researcher Douglas Harris found that scores had risen by 8 to 15 percentage points for a typical elementary or middle-school student. “We are not aware of any other districts that have made such large improvements in such a short time,” Harris wrote in the journal Education Next. From the Times-Picayune’s reporting:

“Every demographic group of students — for example, English-language learners or African Americans — did at least as well after the storm as before. High school graduation and college entry rates rose as well.

The analysis rules out the possibility that other factors might have improved scores, such as the quality of schools that students attended while they were evacuated or changes in New Orleans’ population.”

But not everyone is ready to celebrate. In an opinion piece for the New York Times, Andrea Gabor –  a professor of business journalism at Baruch College, the City University of New York — puts the test scores in context:

“Last year, 63 percent of children in local elementary and middle schools were proficient on state tests, up from 37 percent in 2005 … graduation and college entry rates also increased over pre-Katrina levels. But the New Orleans miracle is not all it seems. Louisiana state standards are among the lowest in the nation. The new research also says little about high school performance. And the average composite ACT score for the Recovery School District was just 16.4 in 2014, well below the minimum score required for admission to a four-year public university in Louisiana. There is also growing evidence that the reforms have come at the expense of the city’s most disadvantaged children, who often disappear from school entirely and, thus, are no longer included in the data.”

And in a study out today the Education Research Alliance for New Orleans at Tulane reports that the city’s schools have significantly less experienced teachers, and experience higher turnover, than its pre-Katrina workforce. Those factors are typically considered to hurt school achievement, said researcher Nathan Barrett, the lead author and a senior research fellow at ERA-New Orleans. The report offers several potential explanations for why student achievement still improved including: schools an easier time dismissing ineffective teachers; better professional development for those who stayed; and individual teachers were also working longer hours, albeit for a fewer number of years overall.

At a recent EWA seminar for journalists on charters and choice, a panel of experts were divided on whether Hurricane Katrina had been a blessing or a curse for local schools. Veteran education journalist Sarah Carr, who authored a book on the post-Katrina experience, recalled how a charter school once taught only social studies and science for a few weeks before a crucial exam date: “That decision wasn’t designed to get kids a prepared for college as they could be – it was designed to get them to pass state standardized tests.”

Those gains are meaningless if they don’t also translate to more students graduating from college and having better opportunities, Perry said: “I still worry that if we don’t focus on these very basic life outcomes that we may miss the point of improving education.”