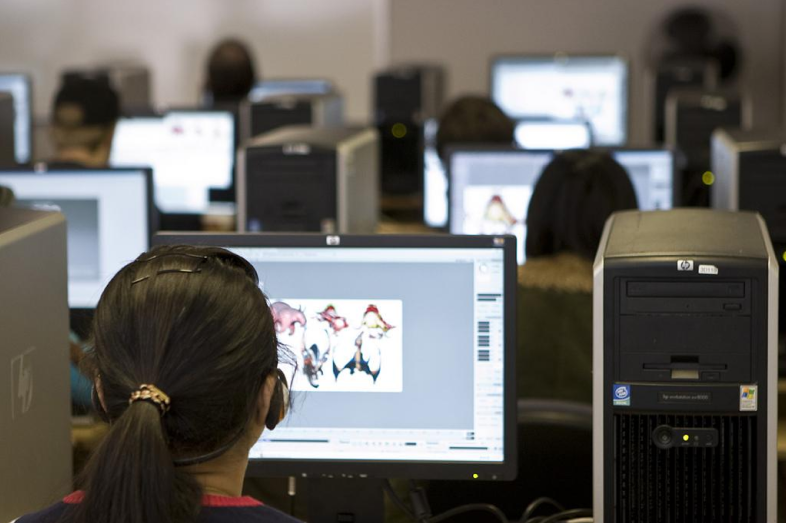 Are Students Too Wired or Not Enough?

In Milwaukee, an epitaph for the classroom blackboard (courtesy of the Journal Sentinel), laid to rest by the so-called “smart board”:

Sitting idle is not on the next generation’s dance card. Now it’s all about touching, swiping, dragging and dropping.

“Whatever you can put on a computer, you can project on a smart board and then interact with it — manipulate it, draw on it, show your understanding of a concept by manipulating what’s on the board,” said Moga.

The smart board – once found only in the more affluent and progressive campuses – is now a common feature in many public schools. But that’s just one element of a technologically advanced classroom. In many places, a significant digital divide persists.

One example: South Florida. The Miami Herald digs deep into the issue for a back-to-school special edition, finding that the gap in digital knowledge is widest for girls and students from low-income families. This summer, local girls are taking part in a seven-week crash course in coding, hosted by Florida International University, the Herald reported:

“Have we noticed a gender gap? Absolutely,” said Cristian Carranza, a director in the Office of Academics and Transformation of Miami-Dade schools, which in the fall will begin adding computer science to classroom work for students as early as kindergarten. “We struggle with that … That has been the battle for everybody.”

Plenty of districts are making investments this coming fall in providing students with tablets and laptops for use both in school and out.

More than 2,000 sophomores and juniors at two high schools in Indiana, not far from the Kentucky border, will have their textbooks replaced with iPads this school year, The Louisville Courier-Journal reported in July. And the upgrade actually comes at a cost savings to the families of students at Floyd Central and New Albany high schools – $100 annually for use of the iPads, compared with $150 in textbook fees.

School officials told the Courier-Journal they’re taking the rollout slowly to avoid the $1 billion debacle of the Los Angeles Unified School District’s iPad initiative, which was beset by problems from the outset.

The Ceres Unified School District in California kicks off its academic year this week with a new one-to-one digital initiative: kindergarteners and first graders will get iPads while students in grades 2-12 will have Chromebooks, the Modesto Bee reported. It’s in line with the district’s priorities to have all students keyboard-savvy by third grade in order to prepare them for online assessments aligned to the Common Core.

It’s important not to oversell the benefits of more technology. It isn’t a silver bullet to fixing achievement gaps or ensuring students have a real shot at success in college and career. There are also real concerns that too much screen time is doing more harm than good. In a 2012 study, the Pew Internet Project found that close to 90 percent of the surveyed teachers believed the current crop of students were “an easily distracted generation with short attention spans.” That criticism was tempered by nearly three-quarters of the teachers agreeing that the internet and digital search tools had improved students’ research abilities. But 64% say today’s digital technologies “do more to distract students than to help them academically.”

Indeed, there are many “unplugged” schools doing remarkable work, but often it’s within a carefully structured alternative model – i.e. the campus educators have made a conscious decision not to utilize classroom technology. One example: the Waldorf School of the Peninsula in the heart of Silicon Valley. As the New York Times reported a few years ago: “Not a computer to be found. No screens at all. They are not allowed in the classroom, and the school even frowns on their use at home .” (The school recommends its students begin limited exposure to devices beginning in the eighth grade, and offers a nuanced explanation of its technology philosophy here.)

To be sure, this is an extreme example of a modern U.S. campus (and a private one, at that). And the effectiveness of the model likely depends as much on a student’s family life as their in-school experiences. Indeed, studies are mixed on the effectiveness of classroom technology, and many have found it depends heavily on the context, as much as a particular device or content.

As the New York Times noted in its piece on the Waldorf school:

Absent clear evidence, the debate comes down to subjectivity, parental choice and a difference of opinion over a single world: engagement. Advocates for equipping schools with technology say computers can hold students’ attention and, in fact, that young people who have been weaned on electronic devices will not tune in without them.

In some ways technology as a feature of education is a foregone conclusion – parents use devices with great frequency, and students perhaps even more so. Are we venturing into an era where the question shouldn’t be, “does technology help?” but one where we ask “how do we tell the good tools from the bad?”

For more on the digital divide, take a look at a solid piece written by my EWA colleague Mikhail Zinshteyn.  We also have the latest coverage, research, and even questions to ask on our Topics Page on classroom technology. We looked at gaming in the classroom at EWA’s recent National Seminar: the write-up from that panel conversation is here. USA Today education reporter Greg Toppo spoke with EWA Radio about his new book “The Game Believes in You”, which looks at how innovative gaming is changing classroom instruction, as well as motivating and engaging students.