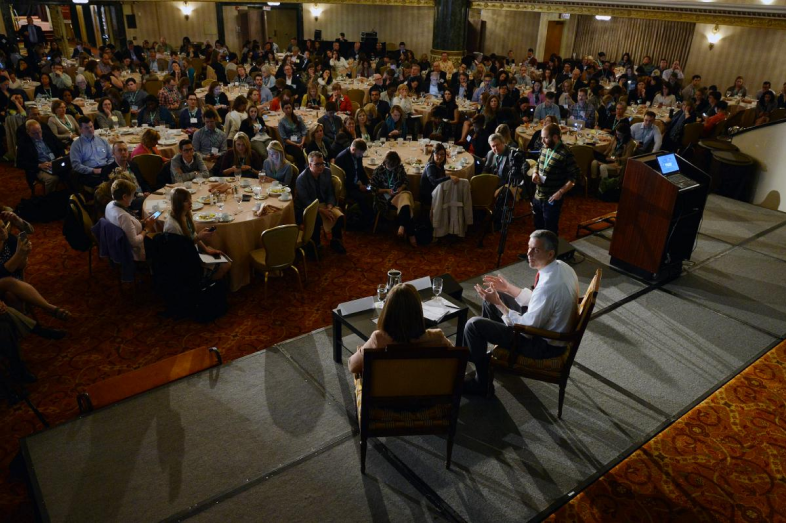 Arne Duncan: Education Is ‘Great Equalizer’ But Not Yet National Priority

U.S. Secretary of Education Arne Duncan subjected himself to what might have been the ultimate edu-press conference in Chicago Tuesday.

U.S. Secretary of Education Arne Duncan subjected himself to what might have been the ultimate edu-press conference in Chicago Tuesday, allowing hundreds of reporters to grill him on testing, No Child Left Behind, college ratings (and yes, White Suburban moms) at the Education Writers Association’s 68th National Seminar.

Questions were submitted by EWA’s journalist members. Motoko Rich, the education reporter for the New York Times, conducted the bulk of the interview, but there were a few live questions from reporters in the audience.

Here’s a summary of the highlights in Q and A format:

Q. The U.S. Department of Education has gotten pushback on some aspects of its waivers from many of the mandates of the No Child Left Behind Act, which are currently in place in 42 states and the District of Columbia. What would the secretary do differently on waivers if he had the chance?

Waiver implementation is going better than most folks give the department credit for, Duncan said. In fact, his biggest regret is not moving forward with waivers earlier, and instead giving Congress so much time to try to come up with a bipartisan agreement on an NCLB rewrite.

Q. NCLB waivers initially required states to roll out new educator evaluations tied to test scores at exactly the same time new assessments linked to the common-core standards were coming on the scene. Should the department have gone slower?

Q. Tens of thousands of parents and students around the country are opting out of standardized tests. What does Duncan make of that backlash? And would the department withhold federal money from a state or school if 95 percent of the students don’t take tests, as required under federal law?

Duncan made it clear he understands the concerns about overtesting. “I’ve been very public … I think there is too much testing,” Duncan said. Much of the testing burden comes from the state and local level, he added, noting that he has urged states to set limits or caps on local and state assessments.

As for opt-outs, “states are supposed to work with districts” on meeting a requirement in the NCLB law that 95 percent of students participate in tests. He expects that most states will be able to meet that threshold. But if states don’t try to hold districts and schools feet the fire on this, “we have an obligation to step in.”

What’s more, the goal of testing is really about ensuring about equity of opportunity. In the past, English Language Learners, students in special education, and racial minorities were “swept under the rug,” Duncan said. “Folks in the civil rights community, folks in the disability community, they want their kids being assessed. They want to know if they are making progress or growth.”

Q. Duncan has been highly critical of the House NCLB rewrite bill, which is currently stalled after failing to gain sufficient support. But he’s been somewhat supportive of the bipartisan Senate bill, which recently was approved unanimously by the education committee. Both bills would significantly scale back the federal role on accountability. Why the difference of opinion?

To be clear, Duncan said, “We’re not endorsing or blessing the Senate bill. I just love that we have a Republican and a Democrat working together,” on this issue, he said, referring to Sens. Lamar Alexander, R-Tenn., and Patty Murray, D-Wash., the chairman and ranking member of the Senate education committee. And he’s glad to see that the Senate bill includes money for early childhood and an emphasis on innovation, neither of which are in the House bill.

Plus, the House bill has another major flaw, at least in Duncan’s view: It would allow federal Title I dollars for disadvantaged kids to follow students to the public school of their choice, a policy the secretary says would divert money away from the poorest kids.

Q. What would be a realistic policy on rating colleges, which is something the department hopes to move forward on, unveiling a college rating system as soon as this summer?

This is about transparency and ensuring students have access to all the information they need to make a good college choice, Duncan said.  ”Are colleges accessible, are they affordable? What are the graduation rates?”

Even the children of college graduates have trouble filling out financial forms and figuring out the difference between grants and loans and the benefits of two-year college vs. four-year colleges, he added. “This is an opaque, difficult, extraordinarily stressful process for too many families,” he said.

He didn’t give many more details on the federal plan to rate colleges, other than to say that he’ll try to highlight schools that are able to keep costs down, increase graduation rates, and graduate more low-income, minority students and first-generation college-goers.

Q. At what point would the department take federal funding away from a college that doesn’t comply with Title IX requirements, which prohibit sexual discrimination, and covers sexual assault?

Duncan was non-specific here. “We’ll take away federal funding when we need to,” he said. Duncan said the department has already published a list of schools it was investigating for sexual assault. “We have far too many young women and young men in this country who have had horrific experiences and have had those swept under the rug, historically,” he said. “If we have to bring down the hammer, we will. The goal is less to play gotcha then to get people to take it seriously.”

Separately, he said the department is considering releasing information about investigations into sexual harassment and violations of the Clery Act, which pertains to campus crime.

Q. There’s been an explosion in education technology. Are we creating digital divide?

“Those concerns are very real,” Duncan said. “Technology can exacerbate the divide between haves and have-nots.” He touted the administration’s plan to help increase access to broadband by reforming the E-rate program, which helps bring connectivity to schools.

Q. What’s your biggest regret in the past seven years? Would it be saying that white suburban moms are the biggest critics of the Common Core State Standards initiative?

It doesn’t sound like that’s on the top of his list. “I try to speak from the heart and try and speak honestly,” Duncan said. A lot of his regrets have to do with Congress and their inability to get much accomplished, “I was a little naïve on the first go-round of how to fix ESEA,” he said. And he regrets that the administration has had a tough time convincing Republicans to go along with its push for expanding early childhood education.

He’s also sorry that, in the United States, “education isn’t seen as a national priority. …The stakes today are so high, the fact that we are now sending. Education has to be the great equalizer, it has to be the tool that helps increase social mobility,” he said.