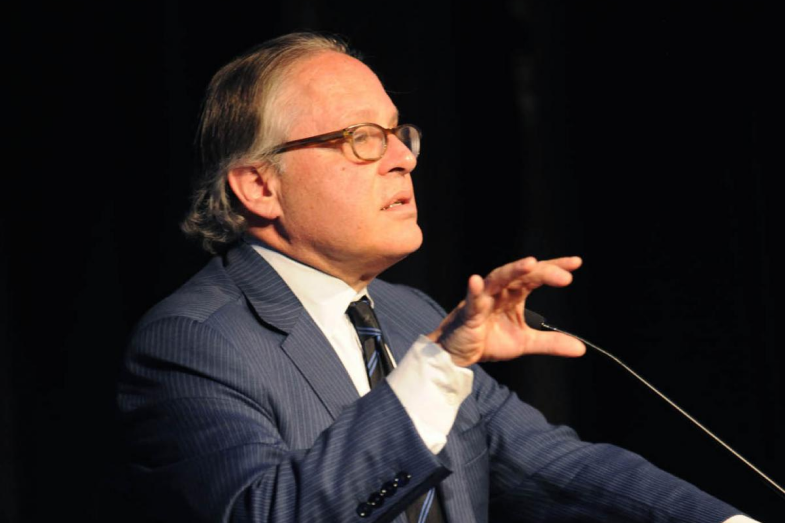 As Education Debate Heats Up, Nicholas Lemann Holds the Line

“I Walk the Line.” Nashville’s late, great Johnny Cash first sang that classic country anthem in 1956. This week in Tennessee’s Music City, journalists were urged to hold the line—as “the referee and truth teller in this fight we are having in education.”

The exhortation came from Nicholas Lemann, professor and dean emeritus at Columbia Journalism School, speaking at a May 18 banquet to honor winners of the 2013 National Awards for Education Reporting.

Appearing on the first day of EWA’s 67th National Seminar, Lemann assigned education journalists a mission: to get “as close as we can get as journalists trained to be storytellers to being as rigorous as real educational researchers while using the power we have to engage the public through writing about people and real situations in a compelling way.”

We are not talking about an easy task, Lemann added. “To try and find that common ground between those two roles is never completely possible, but I think is a wonderful thing for us to strive for, particularly now.”

On the academic front, the quest to hold the ideological line helped give rise to Columbia University’s Spencer Fellowships in Education Reporting. The first fellowships were awarded in 2008.

Lemann described his collaboration with the Spencer Foundation—the Chicago-based philanthropy that funds three fellowships a year for journalists to study at Columbia and pursue an ambitious education reporting project—as a quest to bring “a basic level of literacy among journalists in social sciences research, how to basically understand the way it’s done and the language it uses.”

While journalism has changed, the skills learned in the fellowship are more relevant than ever, Lemann said. “The foundation’s dream was that it would pull in a person from the 14-person education desk of The Philadelphia Inquirer and they’d learn all about research, go back and sit on their desk and tell all their colleagues how to be research literate.”

“Well, we’re not in that movie anymore in a whole bunch of different ways, as you all well know,” Lemann continued. “I don’t know what it’s going to be like in 10 years or 20 years,” he added. “For Columbia Journalism School it is very important for us to do what we can, and for other universities to do what they can, and try to make this new institutional format as high functioning, as survivable, as productive, as robust as we can.”

Lemann considers the Spencer Fellowships a success: “We have three fellows a year, and every single one has published prominently.”

For next year’s Spencer fellowships, applicants might want to look to higher education as a project proposal. “I wish we would get more applications on higher ed,” Lemann told the audience. “We get very few, and I think that’s the next battleground.”

So much of higher education is based on what is essentially (the) user fees from students and their families, Lemann observed, and price resistance is becoming a fact of life in higher education in a way that it sort of miraculously wasn’t for decades.

“Watch this story; it’s going to explode at individual universities, at state legislatures and nationally,” he said. “And again, journalists are absolutely necessary to try to bring it to life and make people understand the myth version on both sides [and] the truth version that is somewhere in the middle. So I hope that some of you will go off and poke into that, because I promise you, there’s a great story there.”

On the topic of testing tied to Common Core State Standards, Lemann cautioned that the story is complicated.  He said he thought it was important to change the “powerfully emotional” conversation about “a tremendous dislike of tests” to a dialogue about what kinds of tests work. “A test is a tool, it’s not an education in and of itself,” he observed.

Commenting on what some have come to call the “MOOC bubble”—a surge of exuberant enthusiasm over massive open online courses—Lemann predicted more experimentation in online education to find successful models. “The air is going out of the balloon on MOOCs already,” Lemann said. What works better? “To replicate the in-person class … to do an online course right, is a huge amount of effort.”

Speaking during a weekend that marked the 60th anniversary of the historic Brown v. Board of Education U.S. Supreme Court decision that declared school segregation unconstitutional, Lemann asked the audience to look not just at how far there is to go, but also how much has been done and how much is already known about the legacy of racial segregation.

“There is an enormous amount of good research,” he said. “I think a really good role is not to say, ‘Oh, my God, we still have these problems.’ … This problem has been going on for a really long time, and as a journalist what’s better is to say, ‘Here’s what we know.’ ”