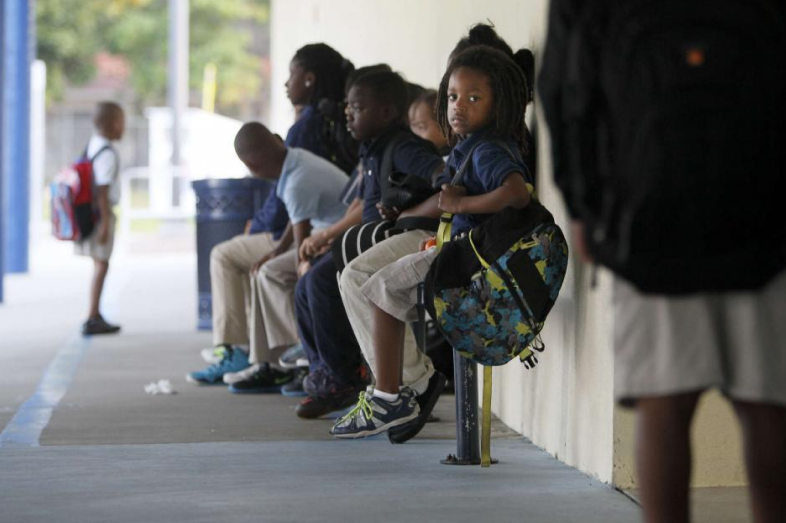 Cara Fitzpatrick was in labor when her husband – and colleague at the Tampa Bay Times – asked her “So what can you tell me about segregation in Pinellas County?”

The paper had just decided to do a large-scale investigation into the district’s schools that were serving predominately low-income, black students. Two years later, Fitzpatrick’s son is walking and talking and she and the rest of the team have earned a Pulitzer Prize for their series Failure Factories.

She and fellow Tampa Bay Times reporter Lisa Gartner spoke at the Education Writers Association’s National Seminar Sunday to share insights from their series, which exposed the conditions at five Pinellas County schools that have become among the worst in the state since the district ended integration efforts in 2007.

The broad goal, they said, was to get beyond the “academic” reasons for why low-income and minority students were lagging behind their peers and hold officials accountable for the ways they had failed these children. Gartner said they asked the questions: “Who did what, who didn’t do what [and] who said they were going to do something and didn’t?”

Doing so took 18 months, a team of reporters and editors, millions of data points and more than $10,000 spent on public records. It also took immeasurable amounts of persistence and organization to obtain the mix of data and on-record conversations with real people necessary to tell these stories so powerfully.

Fitzpatrick and Gartner, prodded by an editor, had a “wish list” of seemingly impossible reporting to get: A white student who admitted that he or she could get away with things in school that black students would be punished for. A day spent with a student who had been suspended from school.

They got both of these – and more. To spend time with a suspended student, for instance, they asked families agreeing to help with the series to call the next time their student was suspended. It took months, but eventually someone did.

Teachers were another prime source for  Fitzpatrick, Gartner and Michael LaForgia — the writers of the series. Using old Board of Education agendas, they found teachers who had recently left one of the five schools they were focusing on, thinking they might be more willing to talk about problems they had seen.

Gartner said she cold-called about 300 former teachers, leaving them similar voice mails in her “PTA mom voice” asking for interviews.

The same determination was needed to obtain much of the data on which the reporters relied. For instance, they requested a database of substitute teachers at the schools. At first, the district told them the information would cost $2,000 at minimum. Then, it said the information didn’t exist anymore – that it had been lost during a transfer of vendors.

The Tampa Bay Times challenged them on that claim and argued that the district was the legal custodian of the data and needed to have it. Ultimately, Gartner and Fitzpatrick got the information for free. “It took months of wrangling,” Gartner said. “Don’t take no for an answer. When they tell you it’s going to cost $2,000, ask why.”

Similarly, it took “a long time and a lot of nagging” to get seven years of discipline data from the district, said Fitzpatrick.

The persistence proved to be worth it: That database included information on punishable offenses, where they happened, what teacher wrote them up and what the punishment was. Through analyzing these millions of rows of data, the reporters were able to prove a pattern of minority students not only being suspended at higher rates, but being more harshly punished for similar subjective offenses, compared to all district students.

The Tampa Bay Times team also made several of its own databases for this project, combining different sources of information. One showed all the teachers who had gone through each of the five schools, including their employment history and certification results.

Other databases that used local, state and federal funding were built to test the claim that these schools were getting more resources than others in the district. (Spoiler alert – they weren’t.)

Not only were the databases helpful for quantifying these issues and keeping track of the information, they also served as fodder for questions for sources – which helped uncover additional information.

Sensing a theme? Keeping asking for the information you need.

“When you think you have enough, get more,” said Gartner.