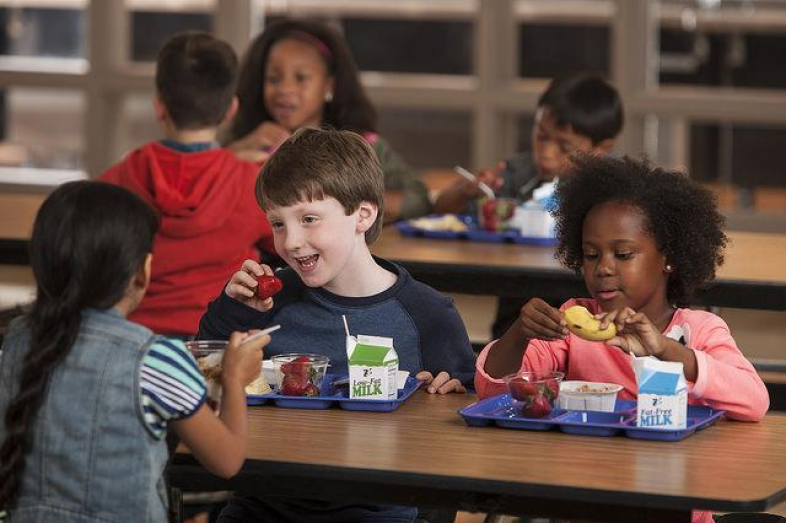 For education journalists, writing about poverty poses many challenges. But one of the most overlooked is that it’s often difficult to know much about the socioeconomic background of students in a given school. Reporters often rely on two things: anecdotal evidence and the percentage of students who receive a free or reduced-price lunch.

The latter is dropped in stories to serve as a signpost for the reader – 90 percent free or reduced-price lunch is supposed to indicate that a school serves mostly students from low-income families. Five percent would signify an affluent student body. But there are many limitations to this data point and it may miss important nuances, such as whether families own or rent a home, the number of college-educated adults in the neighborhood, and the percentage of neighbors without cars or those who live below the poverty line.

“It’s a problem that keeps getting worse year after year,” William Ward of the National Center for Education Statistics said during a panel at EWA’s National Seminar in Boston this month. “It’s probably less reliable over time.”

Ward was joined by Peter VanWylen from the Memphis Teacher Residency for the talk – Measuring Poverty: National School Lunch Program and SES. They discussed many of the shortcomings of using free and reduced-price lunch as a sole measure of socioeconomic status, and how they are grappling with ways to provide more meaningful statistics.

Families have to sign up for the lunch program, meaning not everyone who qualifies necessarily takes part. Schools or districts that can demonstrate high poverty in other ways automatically have 100 percent of students signed up. The cutoff for the lunch subsidy is the same in most places despite differences in the cost of living (though Alaska and Hawaii use different formulas). But the subsidized meals program only makes a distinction between the poorest students and everyone else, missing much of the economic spectrum. (Free-lunch recipients live in homes with incomes at 130 percent of the federal poverty line, an income of $24,300 for a four-person household. Homes with reduced-priced lunch recipients make no more than 185 percent.)

Ward discussed how the makers of the National Assessment of Educational Progress, known as the “nation’s report card” are trying to expand the definition of socioeconomic status to one “broadly defined as one’s access to financial, social, cultural and human capital resources.” This includes measures like parents’ education level and occupation – not just salary.

To do this, though, it’s important to get reliable answers on NAEP survey questions from the fourth, eighth and 12th graders tested. Eighth and 12th graders are currently asked about their parents’ education, but not about occupation. And fourth graders aren’t asked either question. Will said it’s “very challenging” for the youngest students to know this information.

The National Center for Education statistics is linking up NAEP questionnaires with a long term early education study that collects information directly from parents to see if fourth graders give accurate answers. If they do, that’s a good sign NAEP will be able to start regularly asking them such questions in the future.

“We tried this a long time ago,” Ward said. “We’re ready to ask again.”

Federal officials also are looking at using U.S. Census data to develop a “poverty index” that they could turn into a map of schools, Ward said. He described it like a weather map. Information isn’t collected at every single point across the United States, but in enough places to fill in a complete picture, so you can get a relatively accurate estimate of what the temperature will be wherever you are.

For schools that draw from surrounding neighborhoods, this would provide information on where along the socioeconomic spectrum its students lie.

The even better news for data nerds is that a lot of useful Census information already exists  – and we don’t have to look far to find it. VanWylen directed reporters to two helpful websites.

The first, edgap.org, uses Census tract data to allow users to explore income levels in neighborhoods surrounding a given school, and to see how students from that school fared on either the ACT or the SAT. (A Census tract can be several blocks or a few square miles — it includes 1,200 to 8,000 people and data released for each tract is collected and averaged over five years.)

In Memphis, all students now technically are classified as qualifying for a free or reduced-price lunch, due to provisions in the program that allow low-income communities to serve everyone without requiring applications. But that masks some big inequities that edgap.org highlights, VanWylen said.

“We use this tool to tell a tale about injustice in our own city,” he said.

Censusreporter.org allows users to easily dive even deeper into Census tract data, including items such as parents’ educational attainment, the language spoken at home, and how many homes are owned compared to rented. Because the data points are placed onto a map of neighborhoods, reporters can provide more nuanced descriptions of particular communities — and spot surprising differences in socioeconomic status between areas that are sometimes less than a mile apart.

Both VanWylen and Ward agreed that the alternatives to free and reduced-price lunch they are developing are not perfect. For instance, areas with strong school choice programs may draw children from well beyond the schools’ addresses. Looking at the surrounding neighborhood wouldn’t necessarily be valuable.

Still, they believe that the more information researchers and journalists look at to define socioeconomic status, the better.

“If I’m reading something, I would like to know more than just the percent of kids in free and reduced-price lunch,” VanWylen said. “It’s abstract to the average American – they don’t know what the cut off is. It’s a win if in a few years we don’t use free and reduced lunch anymore.”