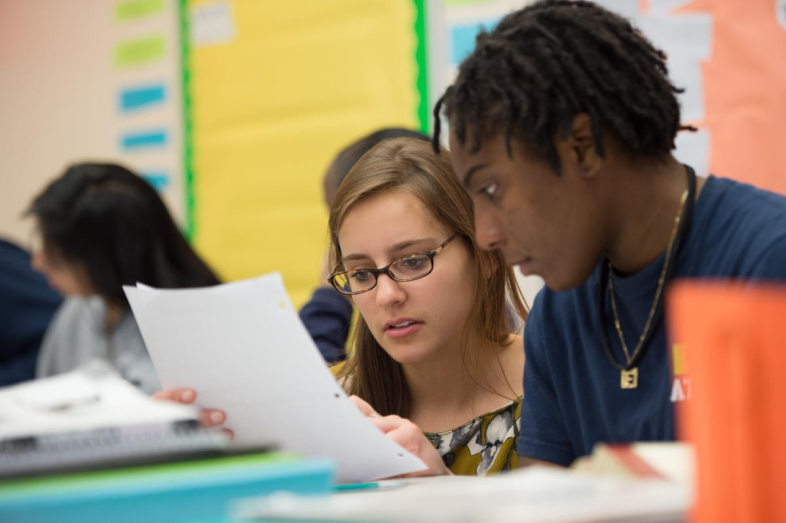 In early May at Match Public Charter School in Boston, 18 freshmen are preparing to discuss themes from “Lord of the Flies.” Their English teacher is Ashley Davis, a 26-year-old native of Cincinnati who’s in her second year of teaching, but acts like a veteran.

Davis will soon have her students explaining the biblical allusions in the 1954 novel and debating whether mankind is naturally good or evil.

In a large multi-purpose room a floor below Davis’s class, Match’s resident tutors are coaching students in math. The tutors, most of them newly minted college graduates in their early 20s, form the backbone of Match’s ability to get and keep a high number of low-income students on grade level.

The tutors are also part of a pipeline to place high-quality young teachers at the head of Match classrooms; many are training to be full-time teachers through the charter school’s in-house teacher preparation program. Davis herself rose through their ranks just two years ago.

Match Public Charter School started 16 years ago as a small high school and is the flagship of an unusual education nonprofit that describes itself as an “engine of discovery and applied innovation.” Match Education oversees the school and also a variety of other efforts aimed at disrupting traditional learning. Match has grown to include four campuses that enroll a total of about 1,200 prekindergarten through high school students, about half of whom come from low-income families. Student attrition is low and test scores are high compared to Boston Public Schools, and upperclassmen are now scoring close to the national average on the SAT, according to Match data.

Despite the success, Match has never sought to expand with the vigor of charter networks like KIPP, Achievement First or Uncommon Schools. Instead it’s established itself as a laboratory and demonstration site to tinker with the chemical compounds for closing the achievement gap. If there were giant beakers in Match offices, they’d likely have the following labels:

Stig Leschly, Match’s 45-year-old CEO, said the organization’s leaders have long believed Match does its best work “on the margins,” and that expansion and replication would stifle employee creativity. Leschly earned his undergraduate degree at Princeton and two graduate degrees at Harvard — a law degree and an MBA — and briefly taught in a Catholic school, but he has long had an entrepreneurial mindset. At age 29 he sold the company he created, Exchange.com, to Amazon for about $175 million. Leschly also founded and ran the Newark Charter School Fund. Now he is preparing to give away the lab-tested ideas of Match Education to help improve education for low-income and minority children in other urban areas.

“We wanted to be an organization that would try things we don’t know how to do,” said Leschly, who took over as Match’s CEO five years ago.

He sat down recently with a group of reporters at Match’s high school, which is nestled next to Boston University and the Charles River. The visit by journalists took place as part of the Education Writers Association’s annual conference, hosted by Boston University in May. Leschly explained Match’s unusually deep reach — for a charter-school management organization — into addressing a variety of pain points on the K-12 through college pipeline. Those projects include:

A teacher-training program. One key to Match’s strategy has been its employment of recent college graduates to serve as tutors for all students. The cost to Match for the tutors is largely offset by federal funding; the one-year job is an approved AmeriCorps program. The tutoring experiences serve a dual-purpose for the AmeriCorps volunteers who wish to obtain education degrees and full-fledged teaching licenses.

Match’s Charles Sposato Graduate School of Education, launched six years ago, requires candidates to complete a tutoring residency at Match or other high-performing charter schools while completing simulated teaching exercises and other coursework on evenings and weekends. During their tutoring year, candidates must pass a high-stakes simulation exam in January to continue on the teaching track. About a third fail the simulation or drop out, but their landing is soft and low-cost: they simply continue as tutors for the rest of the academic year and don’t pay any tuition for their first semester. The candidates who pass and want to continue working toward a license student-teach from January to July and then are hired as full-time teachers the following year.

Receiving schools pay Match a $7,000 fee for the well-trained rookies, which offsets the cost of the degree for the candidate. Candidates start paying their $9,000 tuition 18 months into the program, in $1,500 installments every six months. The first-year teachers continue to receive intensive support and then are evaluated by their students, principals and outside evaluators to provide feedback on their preparation — something frequently lacking in traditional schools of education.

Davis, the freshman English teacher, said teaching isn’t easy, even though her command and control of the class in May made it look that way.

“The program prepared me better than any other program could have,” Davis said, adding that she’s also now a cheerleading coach, a girls group adviser, and the teacher of an extra enrichment course.

“I think the fact that I’m able to do all that and be a decent teacher in my second year says a lot about the preparation I’ve had,” she said.

A college and jobs program. Three years ago, Match started experimenting with how to help low-income, Boston-area high school graduates earn college degrees. The effort strayed from the focus on Match graduates, who mostly go to four-year colleges and graduate at higher rates than average for low-income students. Instead, employees running the Match Beyond program recruit and enroll other non-Match affiliated young people between the ages of 18 and 30 in online courses run by College for America, a low-cost, flexible online curriculum that leads to an accredited degree from Southern New Hampshire University. The idea is to then have the graduates use that credential to move into higher-paying, family-sustaining jobs.

How did Match know the curriculum and competency-based online degree was rigorous?

“I did it myself,” Leschly said. “We audited it. And when we watch the students do it. It’s hard work.”

Match has 175 students enrolled in the program, and 20 graduated in the spring of 2016 with associate’s degrees.

Flinging Match strategies far and wide. For years, Match has earned revenue through in-person training and consulting gigs with districts. But a new effort called Match Export aims to turn what Match teachers do in classrooms every day into shareable products that can be distributed for free. Those efforts, supported by philanthropy, include a new series of animated, online instructional videos that illustrate successful teaching practices.

A more comprehensive effort is underway to eventually put all of Match’s curriculum for math and English online for free. Leschly said this will involve uploading skeletal plans that include unit components and assessments and also the details of each lesson, including target tasks, the main problems and opening activities. All of the curriculum is aligned to the Common Core standards.

“If you’re teaching ninth grade English 1, this will give you a jumping-off point,” he said. “It takes the mystery out of it so you can work on the higher-order skills” necessary to be a great teacher.

In many ways, Match can afford to experiment. The nonprofit posted $61 million in assets — though that includes mortgages and debt on its buildings — and $9 million in net gains in 2015, according to its latest federal filings. Match’s biggest donors nationally include the Bill & Melinda Gates Foundation, New Profit, and the Walton Family Foundation. Locally, its biggest funders are the Barr, Smith Family and Lynch foundations. About half the organization’s funding comes from private individuals.

Leschly said the Export project may always have to be supported by philanthropy, but that the charter school and the teacher-training programs are pretty much self-sustaining these days, and that Match is close to paying off its debt for school facilities. Because Match will never get big in absolute terms, Leschly said, it will continue to focus on exporting its lab-tested ideas to other institutions.

“For this to work, we need hundreds of cities and partners to prove it,” he said.