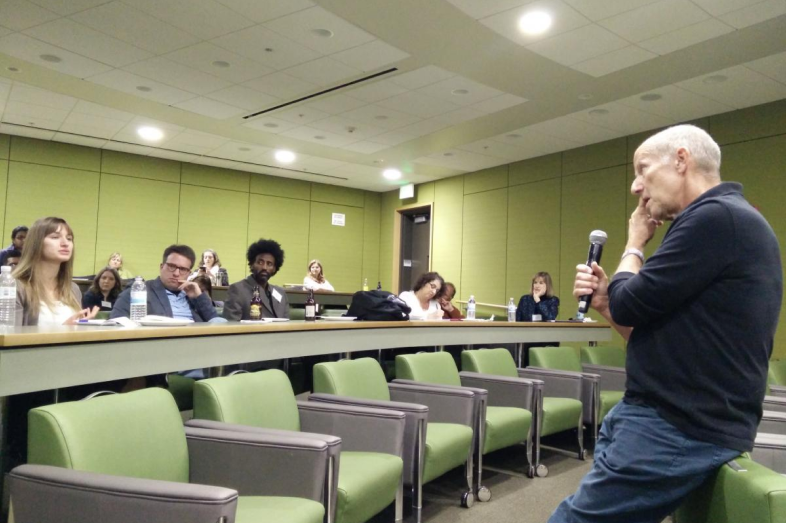 Can Kicking Down Conventions Close the Achievement Gap?

At High Tech High School in San Diego, there are no bells that signal the start of class periods. There are no seven-period days, no mock standardized assessments and no lectures.

The first of 13 charter schools called High Tech High, classes at the San Diego high school like English and engineering are blended into projects such as writing a play and building the set. In another classroom, a history teacher might team up with a physics teacher to have students create a series of large, moving gears with synchronized pictures that tell the story of an ancient civilization’s demise.

The school seems to ooze nonconformist education ideals, which is exactly founder Larry Rostenstock’s goal. In fact, he wishes it could be more out-of-the-box.

“There’s a constant regression to the mean that [you miss] if you don’t pay constant attention to it,” Rosenstock told reporters at Stanford University in November. “It’s not what you put in, it’s what you don’t let in. And (standard education practices) are trying to creep in all the time.”

Rosenstock spoke at the Education Writer Association’s seminar “New Lens on Learning: The Hidden Value of Motivation, Grit and Engagement.” While there, journalists from across the country viewed a screening of the documentary “Most Likely to Succeed” that featured the San Diego high school.

In the film, Rosenstock said the school’s purpose was to graduate students who could think more critically and leave with more problem-solving and communication skills than their traditionally educated counterparts.

Rosenstock said he was inspired to create the school after he taught woodworking in Boston public schools during desegregation. He learned that his students were more engaged when they were actually interested in what they were crafting.

High Tech High aims to tap into student passions through its project-based curriculum. Teachers take a laissez-faire approach by providing instructions for what the finished projects should feature while leaving it to students to develop and create the completed product. They don’t explicitly tell students what they’re doing wrong if there’s a problem. Rather, the teachers encourage students to explore solutions and provide the staff time to help them work through the kinks.

Each project culminates in a final presentation or a performance that will be viewed by family, friends and the public at an end-of-year exhibition. The students are still graded along the way through regular check-ins, a process depicted in the documentary.

Rosenstock said the idea behind his school was inspired by creating a learning environment to give traditionally disenfranchised students a more level playing field. “The film is misleading in thinking High Tech High is pedagogical experiment,” Rosenstock said. “Primarily, it’s an equity experiment.”

Rosenstock said that although the school cannot recruit based on race due to California proposition 209 that bans the practice, students are instead selected through a lottery based on zip codes. “It turns out zip codes predict socio-economic status and ethnicity well because of housing segregation,” he said.

At High Tech High in San Diego, 98 percent of students go onto college, with about 75 percent attending four-year programs – data provided by Rosenstock. The most current state test score averages show that the school’s various demographic groups perform much higher than the state average, with black, English-language learners, Hispanic and low-income High Tech High students performing between 40 and 100 points higher than students with similar backgrounds statewide.

Rosenstock said High Tech High is not a cure-all for the ills of traditional education; instead, it’s the culmination of ideas collected from schools across the country.

He said he hoped more schools would experiment with teaching outside the traditional models while also exploring reforms that are different from what others are doing.