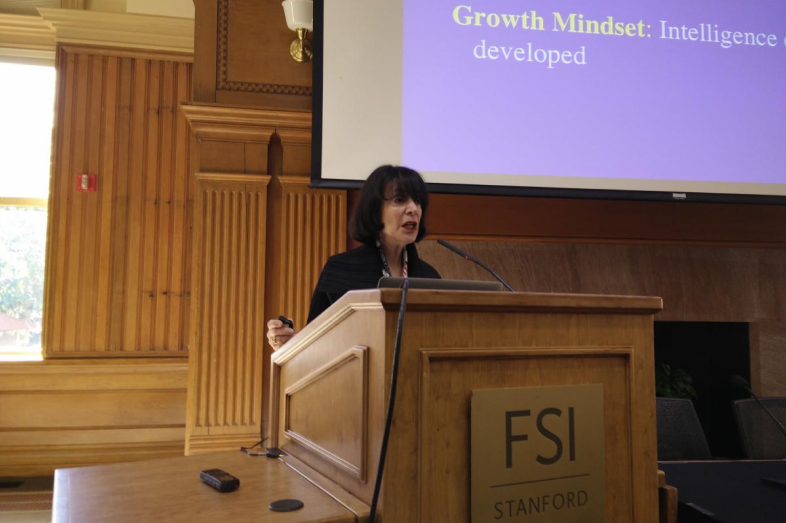 One of the most popular ideas in education today is also one that is often misunderstood. While Carol Dweck’s “growth mindset” has a emerged as a meme for motivation less than a decade after the publication of her book “Mindset: The New Psychology of Success,” the Stanford psychology professor is worried about its misapplication.

At the same time that gamers are creating growth mindset games and school districts are paying attention to “soft skills” such as perseverance and self-control, some educators have oversimplified the concept, Dweck said during a speech on what growth mindset is and isn’t at a November Education Writers Association seminar at Stanford University.

Among the common misuses: Teachers who use growth mindset as a shorthand without understanding it; parents who teach a growth mindset by haranguing kids to try harder; and schools that assume they can measure growth mindsets by asking teachers and students to rate their own.

Praising a child’s intelligence, Dweck explained, creates a “fixed mindset” – the belief that how smart they are governs what children can and can’t do. So when they become stuck on a problem, children tend to give up, concluding they weren’t born bright enough to do well at math. Dweck said that’s self-defeating because children then become “less resilient in the face of obstacles.”

Its opposite, a growth mindset, is “the belief that you can develop your abilities,” she said. That belief, a truism on its face, can become a powerful motivator. Teaching children that the brain works like a muscle that gets stronger with practice reinforces persistence. Encouraging students to visualize brain synapses firing when they overcome challenges is not merely a metaphor: Brain studies that Dweck and other speakers cited showed surges in brain activity when students respond to mistakes.

A body of research confirms that a growth mindset can improve performance, Dweck said. A 2012 study of all Chilean tenth-graders by Stanford colleagues showed students with a growth mindset significantly outscored peers with a fixed mindset in math and reading, regardless of income. A study of how mothers praised children between ages 1 and 3 bore positive results years later. Those children who received more “process praise,” commending effort relative to other forms of praise, were more likely to work hard, confront challenges and better deal with failure – traits of a growth mindset – in second grade.

But the growth mindset movement has pitfalls, too, in part because the research community may have made the development of a growth mindset “sound too easy,” Dweck explained in an essay that appeared in Education Week this fall. Prodding to increase effort alone, telling students they would have done better if they tried harder, isn’t enough, Dweck said. Without suggesting learning strategies when students are stymied and judiciously offering help at the right time, a student may feel more incompetent if more effort doesn’t work. Telling students to “keep trying and you’ll get it” does not instill a growth mindset, Dweck said. “I call it nagging.”

Teachers who heap encouragement on students may assume they have adopted a growth mindset. But, Dweck said, “growth mindset is about closing the achievement gap, not about making low-achieving kids feel good in the moment but not learn in the long run.”

Teachers who incorporate a growth mindset also provide critical feedback and give students an opportunity to revise their work. They create a classroom where students are encouraged to take on challenges, try new strategies and acknowledge and explain their mistakes, she said.

Teachers must be in touch with themselves, too, and look for their own “fixed mindset triggers,” she said. Do they feel dread when faced with a challenge, frustrated when they struggle with a problem, defensive and discouraged when they face criticism and setbacks? Do they assume that students who are struggling to learn have a fixed mindset and blame their parents?

Most people, Dweck said, have neither a fixed nor growth mindset; they’re a hybrid, and different situations and challenges bring out qualities of one or the other.

Teachers must work hard to create a growth mindset and a classroom where it thrives, Dweck said. “It requires a constant journey,” she said.