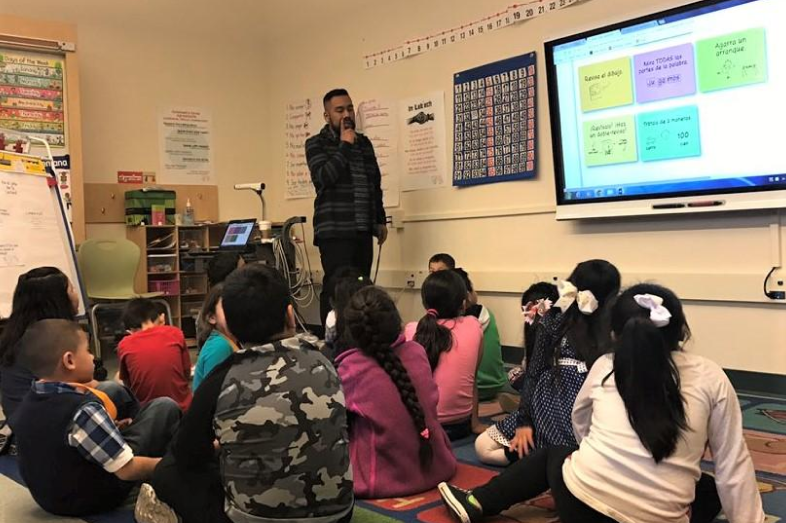 Covering Immigrant Students and Families in the Time of Trump

Covering immigrant students and their families – always challenging given legal and privacy concerns — has arguably never been more timely, as recent shifts in federal policy have thrust them into the national spotlight.

A panel of researchers and journalists offered advice on pressing issues, including: how reporters can explain the stakes of their stories to sources, whether undocumented students should be named, and how to discuss complicated immigration policy shifts in a clear and compelling way that draws in readers.

“It’s not just children of immigrant parents who are affected” by crackdowns on immigrant communities and increases in deportations, said Joy Ee, a postgraduate research scholar at the University of California, Los Angeles. “All students are disrupted by this fear-inducing tactic.”

Ee opened the panel by presenting findings of a recent study she co-authored that underscores the impact of more restrictive immigration policies, and tougher enforcement, on American public schools.

For her study, Ee and Patricia Gándara, the co-director of the UCLA Civil Rights Project, surveyed 3,500 educators in more than 730 schools across 12 states. (The survey was not nationally representative.) The research suggests that the crackdown on illegal immigration and the effort to cut legal immigration under the Trump administration has led to rising fear among immigrant students and their peers.

In addition, the survey probed the perceived impact on student attendance and achievement. Fifty-seven percent of survey respondents said they had seen increased absences from school that “may be related to concerns about immigration enforcement,” (though only 11 percent said the impact was “extensive/a lot.”)

Also, 61 percent of educators reported witnessing a decline in academic performance among students that may be related to immigration enforcement concerns. (Of that figure, 13 percent said the impact was “a lot/extensive,” compared with 48 percent who said it was “a little” or “somewhat.”) [Click here to view a related presentation.]

Panelists then shared some practical tips about how to approach coverage at the intersection of education and immigration, and how to tell difficult personal stories.

Be proactive, not reactive. “Don’t wait for something to happen in your community” to start covering immigrant families, said Elizabeth Aguilera, the co-founder of Migratory Notes, a weekly newsletter that collects America’s best immigration reporting, and a reporter at CALMatters.

One way to start building trust — and story ideas — is to reach out to those who work directly with immigrant families. Aguilera called them community “guideposts.” Those include pastors and priests at local churches, school staff, and administrators at schools with large immigrant populations.

Ask for permission. Reporters must be mindful of the ethical challenges and legal repercussions of telling stories of immigrant students and families, the panelists said. Approach “it from a humanistic perspective with utmost integrity and respect for the child’s story,” said Ana Ponce, the chief executive officer of Camino Nuevo Charter Academy, which serves a large population of immigrant children who live in some of the most underserved communities in Los Angeles.

Ponce added that reporters should also consider it part of their job to share with their sources the larger purpose of reporting the story. They must give their sources “a sense of the power of what their story can tell,” Ponce said.

Look beyond enforcement coverage. Conor Williams, a senior researcher and writer at New America’s Education Policy Program, pointed out some areas to focus on beyond the impact of aggressive immigration enforcement policies. For instance, reporters could explore newer destinations of resettlement for immigrants, Williams said.

“What does it look like in a community where demographics have changed?” he said. “Are schools adjusting to the changing demographics? Are there more dual-language immersion programs?”

Get the parents’ perspective. As an educator, Ponce said, she often encounters parents who choose not to share information about the family’s immigration status with their children because they worry it will lead to anxiety. Delving into these complicated issues is hard but necessary for reporters, Ponce said. “It really is a family issue,” she said.