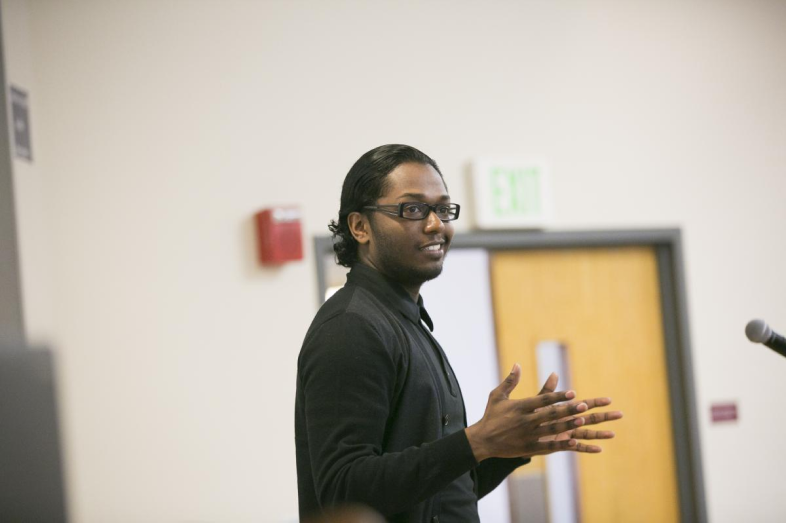 Those are just a few examples of “student-centered learning” in action, high schoolers told an audience of education journalists recently.

At the Education Writers Association’s National Seminar in Boston in May, seven students and two teachers from high schools across the Northeast made their cases for the value of students directing their own learning rather than following cookie-cutter curriculums that don’t factor in their interests and needs.

While an evolving concept, student-centered learning is typically described as learning environments in which students have more control over how, what and when they learn. It’s also vital that it provide real opportunities for students to connect the required academic work to their individual interests and goals.

“Curiosity is a powerful motivator. It encourages, engages and enlightens us. … It ignites the mind,” said Jodie Woodruff, a teacher at Rhode Island’s The Met School, a flagship campus for Big Picture Learning, which focuses on helping students connect their academic learning to “real world” internships and experiences.

One of Woodruff’s students loved listening to rapper Tupac’s music and reading his poetry. Her student talked about her passion for Tupac’s work, and it became clear that she was really concerned about “the injustices happening in the world,” Woodruff said.

“So, we said, ‘Tupac, this guy’s got it going on. Have you ever heard about this guy Gandhi?’” Woodruff told the EWA audience.

When Woodruff’s student presented her senior thesis project, Nelson Mandela was in the audience. She went on to graduate from college and work in social justice reform.

The common thread in most students’ stories was how at one point in their education they felt disengaged and isolated from the school system and classroom teaching. But once they found something they were passionate about, they were able to build on that interest, which opened the door for further learning.

Kalise Osula, a graduate of Boston Public Schools now attending the city’s Bunker Hill Community College, became a fierce advocate for students’ rights while still in high school. As a member of the community group Youth on Board, Osula helped to develop a phone app that allows students to report instances of when their rights have potentially been violated at their school. For example, she said, Boston Public Schools’ regulations don’t allow students to be suspended or expelled without a parent or guardian present. If that happens, a student now has a quick way to report it.

Yanine Castedo, a student at The Met in Providence, where Woodruff teaches, came to the school with an interest in politics. She’s been able to nurture that curiosity with internships that have helped her learn about state and local government, lobbying, and campaign management. Castedo decided to focus on protecting students’ free speech in schools and is now leading a campaign to pass legislation to protect student press freedom. She works on the campaign every day before, during and after school and on the weekends.

“I’m so glad I can be a part of this movement and still be able to go to school and get my high school diploma,” she said. “I’m starting this experience very young, not only to build my resume… but also to help future generations of reporters.”

That’s what student-centered learning is really all about, said Castedo: not only students benefit from exploring their passions, but the community also does as well.

Salim Salim, a senior from Maine’s Deering High School, came to the U.S. six years ago as a refugee after being forced to leave Iraq. He said the school’s global curriculum encourages students to take on community projects and internships.

“I realized that learning isn’t about stuffing my face into a dusty old textbook to memorize a sentence and spit it back out,” he said.

He wanted to do something that would help future generations of students, so he created a proposal for a civic-engagement class at his school. He said his experience in the U.S. has taught him that Americans can be educated about the world yet know so little about their own communities.

Lissette Castillo, a teacher at Boston’s Fenway High School, shared with the EWA audience her own experience enrolling in Boston Public Schools as an immigrant from the Dominican Republic who didn’t speak English. She said her educational experience contained “a special kind of bias and a special kind of ignorance,” and despite participating in class every day, there was a clear disconnect between what she was learning and the realities of her immigrant experience.

Student-centered learning means schools don’t ask students and families to check their culture and language at the door, said Castillo, who teaches Spanish for native speakers. Rather they make it an essential part of school and learning.

“Our students are not products of poverty. They’re not at risk. They’re not just urban. They are our children, and they have the right to a good education, an education that will set them free,” Castillo said. “Student centered-learning means we as a community address the very uncomfortable conversation of systematic racism.”