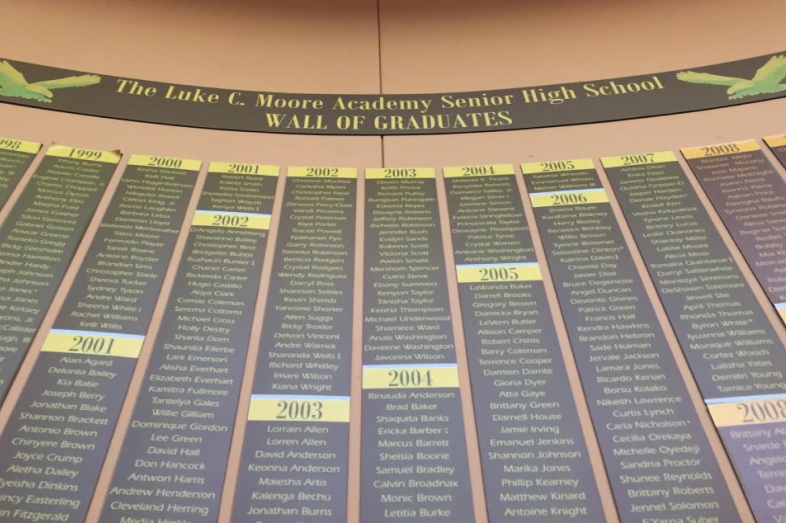 D.C.’s ‘Opportunity Academies’ Aim to Get Students Back on Track

The rapid improvement over the past decade in Washington, D.C.’s district-run schools — as measured by rising test scores and graduation rates — has drawn national notice.

But officials with the District of Columbia Public Schools remain concerned that too many students still slip through the cracks, with 31 percent failing to graduate high school on time, based on the most recent DCPS data.

That’s where schools like Luke C. Moore High School play an important role. Moore is one of four alternative schools — rebranded and retooled as “opportunity academies” — in the roughly 48,400-student D.C. school system. It focuses on helping students ages 17 to 21 get back on track and ready for college.

“There was a time when people thought that if students didn’t graduate in four years, because we don’t get credit for those students, it just didn’t matter,” Jane Spence, the deputy chief of secondary schools for DCPS, told a group of journalists and others visiting Moore High School last week as part of the Education Writers Association’s national conference.

“We decided even if it takes you a little longer, we are willing to stick with you to make sure that you get this diploma because it’s so important to the trajectory of your life,” Spence said.

Another opportunity academy, Washington Metropolitan, concentrates more on younger students, and will open an eighth grade next year. Ballou STAY (School To Aid Youth) and Roosevelt STAY serve students up to age 24 and offer GED and national external diploma programs.

The opportunity academies have a big-name supporter: Former First Lady Michelle Obama, who visited Moore just before this year’s inauguration and went to Ballou STAY in March.

In addition to the roughly 2,000 students in DCPS schools at risk of dropping out, the district is focusing on the nearly 10,000 school-age young people who aren’t connected to any school in the city. Two new staffers at the district’s central office this year do nothing but try to find and re-engage them.

This year, Moore has started offering more competency-based, personalized learning that allows students to move through coursework at their own pace, according to district officials.

During the visit last week, students in an English class were wrapping up their year-end projects, making PowerPoint presentations that focused on social justice issues. The topics tackled by students included halting the requirement that job applicants disclose criminal records, ending violence by police, and curtailing the wage gap between men and women.

The 300 students at Moore have come there for different reasons.

Some, like Jelani Humbles, 19, fell behind in regular classes while trying to access special education services at a different school, so his parents enrolled him at Moore. Others, like Quion Shears, 19, came to Moore after having left his old high school.

Shears attended a neighborhood high school in D.C. but said he dropped out in ninth grade to take care of his ailing mother. She died within a few months, and he was arrested not long after and charged with armed robbery. While in jail, his grandmother died as well, Shears said. He was home for just a short time before he was picked up by police again. Now, he’s set to graduate from Moore this year.

After being shuffled through the school and correctional systems, the welcoming environment at Moore felt different, he said.

“Every teacher is in my corner,” he said. “They make me feel like family.”

Bobby Davis, Jr., 20, who said he “wasn’t always the most promising student,” estimated he had attended eight schools in D.C. and three in South Carolina (including a private school that scouted him to play football). It wasn’t until he came to Moore, he said, that he felt the school staff was invested in him, and college for the first time seemed like an option.

“I literally can’t give this school enough praise,” he said during the school tour last week, citing supportive adults on campus, including administrators, teachers, janitors and cafeteria workers.

This fall, Davis is off to Allegany Community College in Cumberland, Maryland, to study and to play basketball, with hopes of a career as a medical examiner.

“I want to be able to sit at the same table with the great medical examiners,” he said. “I want to sit at that table and belong.”

Share
Author
Caroline Phenicie
of The 74 for EWA
x