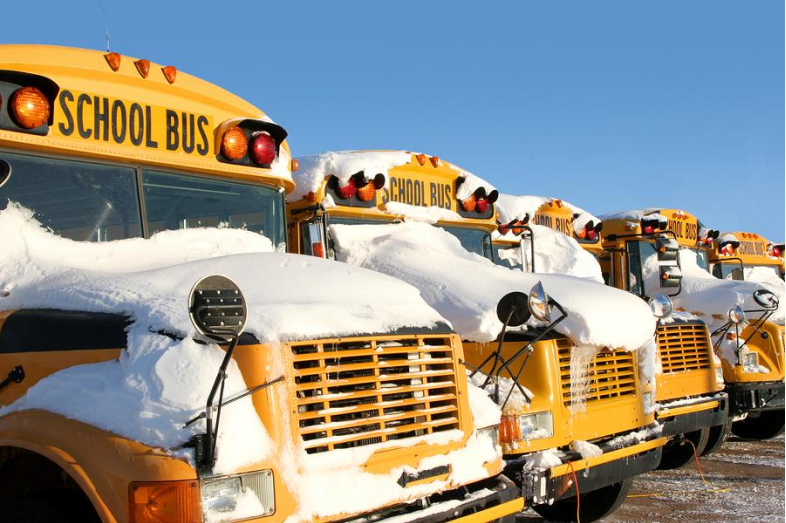 Do Students Suffer When Snow Days Pile Up?

I’m in Atlanta right now, where schools took every precaution to avoid a repeat of the logistical nightmare that unfolded two weeks ago when two inches of snow paralyzed the city. And with the roadways iced over and the precipitation piling up, it looks like education officials made the right decision.

Preparations for the latest storm — which local meteorologists say could reach “historical proportions” – included deciding well in advance to cancel school today, when the worst of the weather is expected to move through the region. (Panic levels high at the local stores, as people stocked up on the necessities and the not-so-necessary. Overheard at my hipster corner market earlier this week: “Get the Greek yogurt!” “How much?” “All of it!”)

There’s a popular chart making its way around the Internet, showing how much snow it takes to cancel classes in different parts of the country. While that makes for fun reading, the northern comedians (well played, Saturday Night Live) and Twitter commenters deriding southern cities as somehow wimpy when it comes to snow are missing the point.

Indeed, classes were canceled here Tuesday as well, which seemed an overreaction when the weather in the metro area amounted to little more than an intermittent chilly drizzle. But in many cases these are municipalities that simply aren’t equipped to de-ice roads or plow streets on a major scale. And without those services, which are commonplace in regions where snow is plentiful, getting to school can become a real risk. That’s why when schools shut down abruptly Jan. 29, many families had no way to get their children home. How much a lack of planning contributed to the problems in Atlanta is being wrangled over by the politicians.

This winter has been particularly brutal for academic calendars across the country. In Minnesota, the governor canceled classes for all public schools last month, the first time that’s happened since the 1996-97 academic year. In Michigan, where rough winters are commonplace, many districts have already exhausted their allotment of six snow days and lawmakers are considering giving schools more flexibility to add on instructional minutes. Additional cancelations will require extending the school day or year to make up the time. In Louisiana, districts plan to squeeze in the makeup days ahead of the statewide assessments in mid-March, so that students have as many days of instruction as possible before their proficiency is measured.

Many districts are considering shortening – and even canceling – spring vacation to make up for snow days. The Louisville Courier-Journal reported that in eastern Kentucky, the 4,000 students in the Perry County School District have lost 21 days of school this year.

“Since our kids returned from Christmas break on Jan. 2, they have been in school a total of six days,” Superintendent Jonathan Jett told the Courier-Journal. “This has been a very difficult winter, but we have no other choice than to prioritize instruction and get in as much class time as possible.”

But how much do snow days really hurt student achievement? According to one Harvard University researcher, the answer may be “not much,” at least when it comes to statewide tests. (Hat tip to Minn. St. Cloud Times education reporter Marta Jewson for bringing the study to my attention.)

Assistant Professor Joshua Goodman of Harvard’s Kennedy School of Government found keeping school open during a storm had a more negative effect than canceling classes, in part because parents often kept their kids home anyway, which meant they fell behind in their lessons.

The findings are “consistent with a model in which the central challenge of teaching is coordination of students,” Goodman wrote. “With slack time in the schedule, the time lost to closure can be regained. Student absences, however, force teachers to expend time getting students on the same page as their classmates.”

I spoke with a few Atlanta parents about the preemptive school closures and most were supportive. A father who grew up in Connecticut said the snow day had been a rite of passage in his own childhood and he was enjoying sharing the experience with his own kids – at least on a very limited basis. Several people I talked to had been stuck on roads for hours during the prior storm trying to get home, and a few had friends or family who even spent the night sleeping in their cars or in stores.

“I don’t want to worry about them on the bus sliding around the road,” a mother told me while waiting in line at the market Monday night. “I’d rather have (my kids) safe than be sorry.”