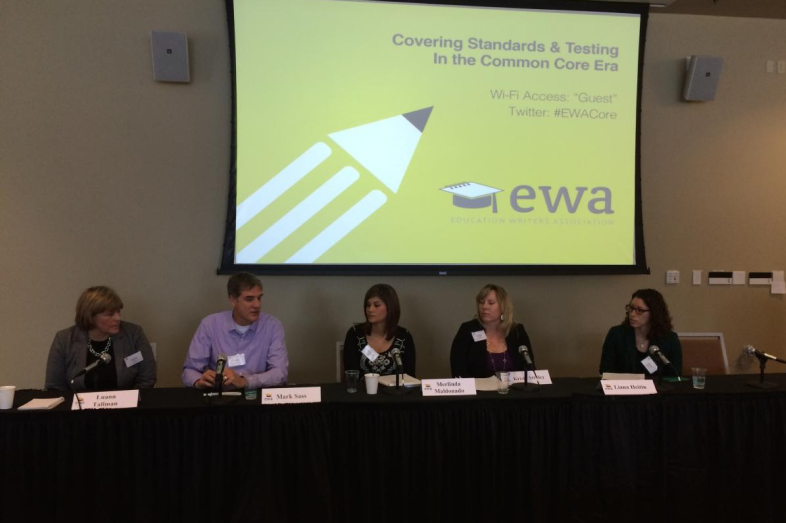 For teacher Merlinda Maldonado’s sixth graders at Hill Middle School in Denver, it’s not necessarily about getting the answer right. It’s not about memorizing procedures, either. If Maldonado’s classroom is clicking, frustration can be a good thing.

Since Colorado adopted the Common Core State Standards in math and English language arts in 2010, educators such as Maldonado have adapted, experimented and sometimes struggled to put them into practice. But Maldonado said it’s a “productive struggle” that can lead to better learning, provided parents set aside their own frustrations and let their children work through the process. Kids often “just want us to tell them what to do — It’s not about that,” Maldonado said. “It’s about getting them to become critical thinkers on their own.”

In all the political noise surrounding the Common Core and aligned tests, what is often drowned out are ground-level voices describing how they have changed classroom instruction and school life. Teachers, principals and school communities have been adjusting – often on the fly – to a dramatic shift in thinking.

At the Education Writers Association’s recent Common Core seminar in Denver, four educators from the region offered largely positive reviews of the standards while pointing out shortcomings in seeing them through.

Standards Are ‘the Floor’

Luann Tallman, the principal of Iowa Elementary School in Aurora, Colorado, a suburban district with a student population more like Denver’s, said the Common Core takes educators “where none of us have ever really gone before” by moving away from skills and knowledge-based teaching and toward synthesis and the thought process.

Mostly, she said, teachers understand they have no control over the standards or tests aligned with them (in Colorado, that’s the assessments developed by the PARCC testing consortium. (PARCC is short for the Partnership for Assessment of Readiness for College and Careers). But she said educators have plenty to say about how standards translate in the classroom.

Standards, Tallman said, “are the base, the floor,” for where every student should be. At her school and others, that means establishing learning targets and communicating them clearly to students.

Kristy Straley, a teacher at Puesta del Sol Elementary in Albuquerque, New Mexico, said the shift to the Common Core has teachers collaborating more, out of necessity. One of the well-documented challenges of the shift to the new standards is a lack of a good curriculum, which is forcing educators to patch things together.

“Oftentimes, teachers can kind of go to their classrooms and work in isolation,” Straley said. “Common Core has definitely led to a path where we collaborate because we have to.”

Mark Sass, a veteran educator at Legacy High School in Thornton, part of the Adams 12 School District in north suburban Denver, said he wants students to walk out of math classrooms not knowing formulas, but rather “faced with a situation, knowing which of those formulas to use to solve a problem.”

Sass, who teaches part time and also works as a district facilitator of standards-based grading, raised an interesting rhetorical point increasingly evident in public messaging around the standards.

“We’re not calling it the Common Core State Standards because it’s all in what you call it,” he said.

The Colorado Department of Education appears to feel the same way about what some believe has become a toxic, irredeemable brand. The department avoids “Common Core” and “PARCC” whenever possible. A report from the Denver-based Education Commission of the States highlighted the lengths some states have gone to try to claim the standards as their own instead of calling them … you know what.

That the PARCC exams are designed to be given online has caused tension in Colorado and elsewhere. Some resource-strapped schools are turning over their computer labs to testing for weeks, while others worry lower-income students will be at a disadvantage because they don’t have access to technology at home.

Tallman, of Aurora’s Iowa Elementary School, shared an anecdote about one young girl struggling with what she called “the balloon on the stick.” The girl was talking about the drag-and-drop function on the PARCC assessment

“You have to think about [what] your demographics are – let alone how (students) are going to do on the test,” Tallman said.

Sass said the conflation of Common Core and PARCC is “just killing us.” He said he supports the Common Core (“it’s why I got into teaching”), but the standards and tests are “two separate issues that have to be dealt with.”

That has proven difficult for supporters of the changes. After all, the tests are supposed to align with the standards. Trying to untangle them in the public eye at this point is challenging.

Sass said he has some sympathy for the PARCC consortium, considering that its tests are expected to “serve so many masters” – from auditing student performance to giving feedback to teachers. To be valid, the test needs to be longer, he noted. To get quicker results, he said, it needs to be online – but that too poses problems.

“We don’t focus on PARCC,” Sass said. “PARCC will take care of itself. … PARCC is what it is.”