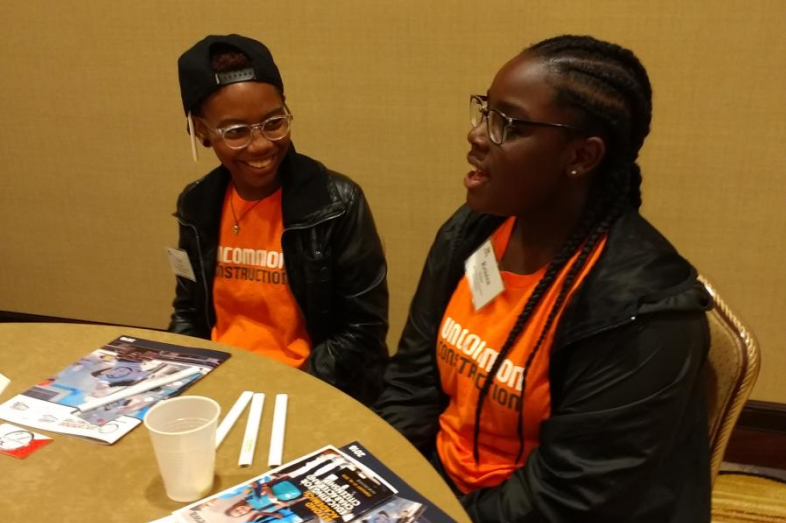 Building character is an everyday event, woven into the fabric of how school is done on every level, educators and students told journalists during a conference in New Orleans on educating for character and citizenship.

A key goal is creating a community of trust among students and faculty, said educators at several schools that put character development at the center. During the panel discussion, they used words like “love” and “team” to describe their schools, emphasizing the mutual respect that they work to cultivate between students and teachers.

Drennan Paylor, a counselor at Dudley High School in Greensboro, North Carolina, said that when students come to her school, “The majority of them say that the teachers don’t love them, they don’t respect them.”

Her students all receive free meals, she said, and 90 percent of them are African-American. “We give [students] love and in return they just change their whole character,” Paylor said during the Education Writers Association seminar.

‘Leaning on Each Other’

Aaron Frumin oversees unCommon Construction, a nonprofit program in New Orleans, where students from multiple schools come together to build houses after school and on Saturdays. Character is built, Frumin said, because of “the nature of the experience” in his program.

Students in his program have a goal of completing an entire phase of construction in one day, he said.

“They’re leaning on each other in an important way,” he said, and have little time to focus on disagreements. “You cultivate this really deep and meaningful human connection by sharing in rigorous mental and physical work together.”

Talking about schools as families was a common thread among students during a follow-up panel.

Tim, a senior participating in unCommon Construction this year, said he genuinely loves the program.

When asked what would make it better, Tim said, “I would have more days. That’s more time with family.”

Journalists also had the opportunity, following the student panel discussion, for more in-depth, small-group talks with students from all of the schools and programs that participated in the event, including not only Dudley High School and unCommon Construction, but also Abramson Sci Academy and KIPP Leadership Academy — both New Orleans charter schools — and St. Augustine High School, a Catholic school in the city.

Byrone, a senior at St. Augustine High School, said the principal at his school knows everyone’s name, “from nicknames to first names, last names. He knows basically everything about you. He’s more like a Dad. It’s more like a home.”

That means a lot, Byrone said. “It’s actually a beautiful feeling to have somebody actually know you, know your name, and know what you’re going through as a student.”

Tim said unCommon is “a huge family. Whenever new apprentices come in, they’re all part of the family.”

Walter, a senior at New Orleans’ Abramson Sci Academy, said he sees himself as a role model for other students, and he takes that responsibility seriously.

“I feel like the things I do will rub off on my classmates,” he said. “Even the youngest students at the school.”

Developing leadership skills is important for students, said Herneshia Dukes, the principal at KIPP Leadership Academy. Educators there try to “demystify what it means to be a leader,” she said, breaking down leadership into a set of habits.

“If you consistently build these habits and do these things,” Dukes said, “these are things leaders all across our globe from Gandhi to Oprah exhibit every single day.”

Stormi, a 6th grader at Dukes’ school, said she likes her school’s focus on teamwork and leadership. Being at her school has given her confidence, she said, because of the multiple opportunities she is given to be a leader both at school and outside of school.

Students were noticeably proud of what they accomplish at school. When asked what they wish journalists would ask them, Carrington, a sophomore at Dudley High School, said she wants to be asked how involved she is at school. “I like to help other students,” she said. “I tutor for Spanish.”

Everything isn’t perfect at their schools, and while educators said they don’t shy away from conflict, students said they appreciate learning from their mistakes.

Cornelius Dukes, the dean of students at Abramson Sci Academy, said he is the “restorative practices guy” at the school.

“I talk about feelings quite a bit,” he said. If students are being bullied at school, for example, officials address it directly by talking with both the victim and the bully.

Sometimes students may not realize that what they’re doing is bullying, he said, so he makes sure students understand how their actions impact other students.

“We want students to feel safe,” Dukes said. “We want them to understand what bullying is.”

Restorative practices encompass multiple types of activities, Dukes said, including mediations and circles, a type of group discussion where conflicts are addressed.

Walter said the restorative process has taught him how to deal with mistakes.

“We’re taught that every action has a reaction,” he said. “You’re responsible for everything you do, whether it’s positive or negative.”

Educators on the panel said it’s up to schools to build the relationships that provide a foundation for trust and character development in students.

“Just be open,” he said. “Don’t hold back from your students. If we can just show a sense of vulnerability to the students, the sky’s the limit.”