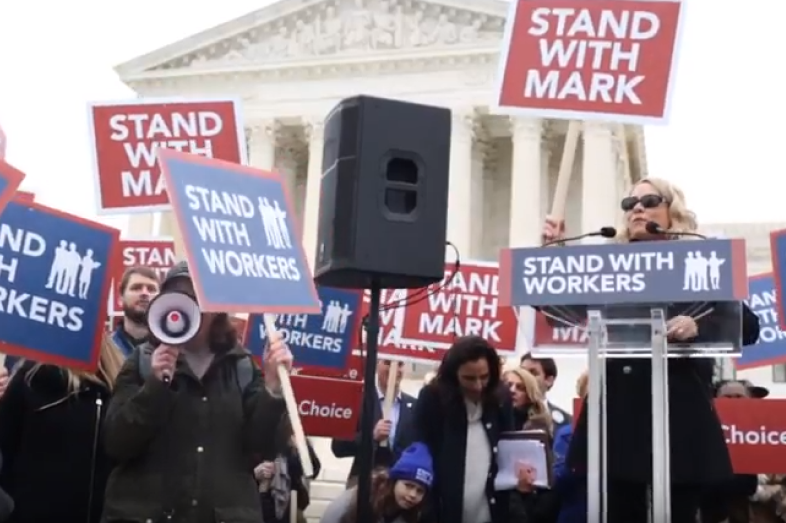 The U.S. Supreme Court is expected to issue a ruling soon that could potentially deal a major blow to the size and strength of teachers’ unions.

In effect, a ruling that finds that such fees are unconstitutional could cripple a significant revenue stream for unions, and might precipitate a drop in their membership. That could have significant short- and long-term effects on the strength that teachers’ unions have long wielded in American politics, from local school boards to the halls of Congress.

“Agency fees” refer to the money that unions collect from employees who are not union members but who benefit from the collective bargaining that unions engage in. For example, even if a teacher is not a union member, a fee may automatically be deducted from his or her paycheck to support the union’s role in contract negotiations.  Such fees are already prohibited in 28, mostly “red,” states.

No one knows for sure what the impact on teachers’ unions will be if the Supreme Court rules against organized labor, or how quickly the effects will be felt.

The National Education Association, the nation’s largest teachers’ union, is making significant budget cuts and bracing for a loss of an estimated 307,000 members over two years if it gets an unfavorable ruling, according to analyst Mike Antonucci, a frequent union critic who writes for The 74 Million.

At the recent Education Writers Association National Seminar in Los Angeles, Lily Eskelsen-García, the president of the NEA, was mum on specific numbers, but said the union would be doubling down on efforts to connect with and recruit members. Whatever the outcome in the case, she said, “we’re not going anywhere.”

While some have warned that the case could cause a dramatic decline in unions’ strength, others have said that the doomsday scenarios are overstated and consider the court case an opportunity for unions to refocus efforts on membership recruitment, and to capitalize on the recent wave of teacher activism sweeping across states like West Virginia, Oklahoma, and Arizona.

The Janus case is the latest in a well-funded, decades-long effort to strip public sector unions of the ability to require workers to pay certain fees. The National Right to Work Legal Defense Foundation and the Liberty Justice Center are representing the plaintiff, Mark Janus, in the case.

In 2016, the Supreme Court considered a similar case. However, the question remained unresolved after the unexpected death of Justice Antonin Scalia and the resulting 4-4 split among the justices.

Scalia’s replacement, Justice Neil Gorsuch, is expected to join the conservative justices in arguing that agency fees amount to an infringement on employees’ freedom of speech.

Assuming that happens and agency fees are found to be unconstitutional, here are some questions for education reporters to explore in their own communities following the high court’s ruling.

In addition to losing revenue from teachers who only pay agency fees, union leaders worry that they could also lose teachers who are currently full dues-paying members.

Talk to public school teachers in your community. Are they aware of the Supreme Court decision? Do union members plan to remain in their unions? Are there non-union workers (agency-fee payers) who plan to become full members?

Don’t expect the Supreme Court ruling to suddenly decimate teachers’ unions. Indeed, it will likely take years for the full effects of the ruling to be felt.

Unions have had a long time to prepare for the decision and are likely to strategically maneuver through the post-Janus landscape to mitigate the effects of the ruling.

Education Week reports that, in some states, unions are already ramping up outreach efforts in anticipation of the ruling—knocking on doors and making phone calls to recruit and retain members. The AFL-CIO, of which the American Federation of Teachers is affiliated, is launching a six-figure print and digital ad campaign urging workers to join a union.

And union-friendly state legislatures have passed laws that would make it easier for unions to recruit teachers and more difficult for members to opt out, as reporter Eliza Shapiro of Politico New York recently reported.

Journalists can talk to the leaders of local and state union affiliates to learn about these efforts. What are unions doing to motivate agency-fee payers to become full members? What type of outreach are they engaging in to boost member recruitment and retainment? Has legislation been introduced at the state level in anticipation of the ruling?

The effects of the Janus case will look much different in California or New York than in states like Texas or Florida. That’s because 28 states, like Texas and Florida, already prohibit agency fees.

That doesn’t mean that these “right-to-work” states won’t feel the effects of the Janus decision.

The Supreme Court ruling will come at a time of teacher unrest across the country. In West Virginia, Oklahoma, Arizona, Kentucky, and elsewhere, teachers have engaged in walkouts and other forms of protest to fight for better pay and benefits and increased funding for education.

In most of the states where the walkouts have occurred, union power is limited and agency fees are prohibited. As some of the key players in these movements discussed at EWA’s National Seminar, the protests were mostly organized  by teachers on social media, with unions playing a supporting role.

Could the recent spate of strikes in “right-to-work” states offer a glimpse into the future of teacher organizing post-Janus?

With the power to quickly mobilize their hundreds of thousands of members across the country, unions have long been a formidable force in American politics at the local, state, and federal levels. Charter school expansion, private school voucher programs, and teacher evaluations tied to student test scores are just a few of the policies to which unions have mounted intense opposition in recent years. For candidates in local school board races, getting the support of teachers’ unions can mean the difference between winning and losing.

But if the Janus ruling leaves teachers’ unions with smaller budgets and fewer members, their political power at all levels of government could be significantly curtailed.

Again, any shift here won’t happen overnight. But journalists should be prepared to examine how the court’s forthcoming decision alters the political landscape in local communities and individual states.