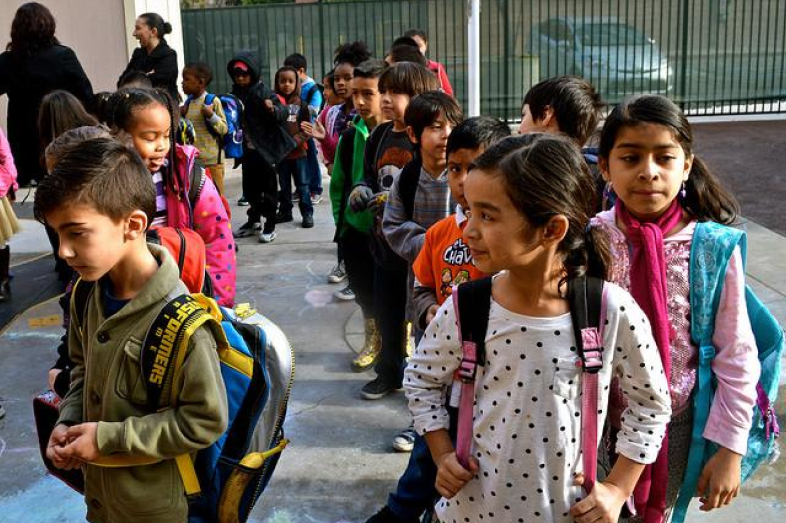 The United States spends more than $600 billion a year on public elementary and secondary education, federal data indicate. By comparison, philanthropic organizations spend roughly $2 billion to $2.5 billion on education, according to Allan Golston, the president of the U.S. program at the Bill & Melinda Gates Foundation.

That’s less than half a percent — a relative drop in the bucket.

But because most of the spending by federal, state, and local governments goes toward fixed costs, such as paying teachers and keeping schools running, there’s little left over to spend on new or innovative ideas. That’s where philanthropy often steps in, and can have a major influence.

In recent years, philanthropic organizations have spent hundreds of millions of dollars on education initiatives. Efforts have included pushing for the Common Core State Standards, promoting new educational technologies, opening charter schools, and investing in struggling schools across the country.

“We can take risks that governments can’t or won’t take, and governments aren’t set up to take,” said Golston, who spoke at the Education Writers Association’s annual conference earlier this year, as part of a panel on the role of philanthropy in education. (The Gates Foundation gave away more than $4.5 billion in 2016, with close to $367 million going toward its U.S. education program, according to the foundation’s 2016 annual report.)

Danette Howard, the senior vice president and chief strategy officer for the Lumina Foundation, says private foundations like hers are in a “privileged space” because they aren’t beholden to shareholders, school boards or alumni as they advocate for policy changes.

“We don’t have these various constituents to whom we are responsible and whom we have to please, and so therefore we are able to be a bit more cutting-edge,” Howard told reporters at the EWA panel. “We have the ability to influence without fear of ramifications and that, in part, makes us quite effective.” (Lumina, which focuses on higher education, provided $59 million in “grants and program-related contracts” in 2016, according to a Lumina financial statement.)

But the panelists readily admitted that the new approaches their foundations support aren’t always successful.

“We have failed plenty,” said Marc Sternberg, the program director for K-12 education at the Walton Family Foundation, which gave away $454 million last year, with $191 million dedicated to K-12 education, according to the foundation’s 2016 annual report.

Walton devotes about 10 percent of its funding each year to studying its work and the work it funds, Sternberg said, to determine what’s succeeding and what’s failing. Over the years, the foundation has learned to work more at the grassroots level and to partner with local organizations and parent groups on what they want to see in their schools, instead of dictating the agenda, he said.

Walton, best known for its work in support of school choice, including charter schools, recently pulled out of seven cities where it was supporting charters to focus its money elsewhere. Sternberg said in a market “saturated with dollars,” the foundation wants to go where it can make inroads with parents and have the biggest impact.

“Our dollars are limited,” he said. “So when we make a decision to withdraw from a city and a state, it’s not an easy one, but it’s because we want to be in a place where we are in a coalition that has a smart, bipartisan agenda.”

Giving large grants to individual colleges, districts or schools is “less likely a good answer,” Golston added. Work is more sustainable and can be expanded upon when foundations help a grantee find additional funding and connect with “like-minded groups.”

When it comes to education research, foundations face some of the same challenges as journalists. Lucas Held, the communications director at The Wallace Foundation, said his foundation looks for research that synthesizes information — such as meta-analyses or literature reviews — instead of relying on individual studies. And the foundation asks questions about how the research was conducted, closely examining the methodology.

(Wallace provided nearly $70 million in “grants and related activities” for 2015, according to a recent financial statement. Held said that, typically, about $20 million to $30 million each year goes toward the foundation’s work in education.)

Stephanie Banchero, who directs the education program for The Joyce Foundation, said when her foundation decides to fund research, there is a long process to determine how the research will contribute to the existing body of knowledge, instead of duplicating efforts.

“We don’t start with: ‘We hope it’ll say x.’ We start with a question,” she said. “We don’t already have the answer and want research to back it up.” (Joyce gave away $41 million in grants in 2015. Education accounts for about $8 million in giving, Banchero said.)

The panelists agreed that while the federal government is an important player — because of the large role it plays in education funding — most of the work to be done in education is not at this level. Especially since the passage in 2015 of the federal Every Student Succeeds Act, which is widely seen as restoring significant authority for K-12 education to states and localities, foundations see their work as “almost exclusively state-focused,” Sternberg said. “That is where the action is.”

The foundations represented on this EWA panel are among the funders of the Education Writers Association. EWA retains sole editorial control of its programming.