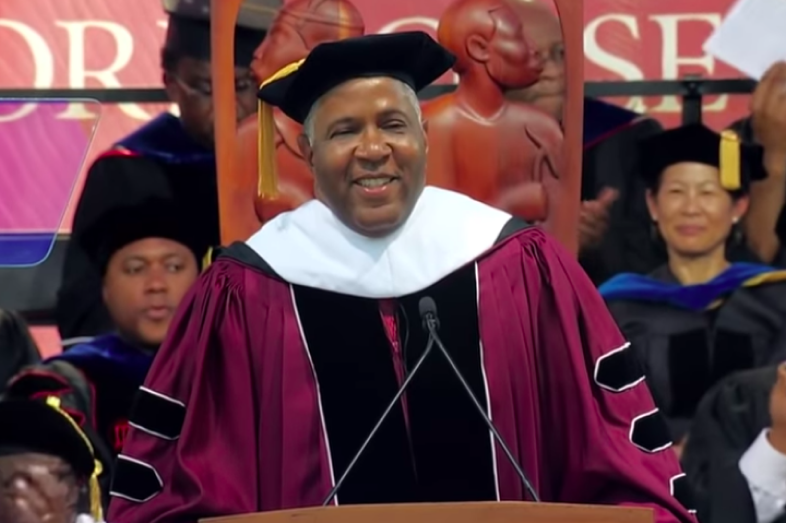 Four Questions on the Surprise Gift to Morehouse Students

During his commencement speech at Morehouse College in Atlanta on May 19, private equity investor and billionaire Robert Smith shocked the audience by announcing he was setting up a grant to pay off the class of 2019’s student loans. The news set off a standing ovation, cheers and plenty of tears among the grateful graduates and their families. But it also raises some important questions for education reporters to consider. Here are four to keep in mind.

Student debt has become one of the most important political, economic and social justice issues of our day. An estimated 44 million Americans owe $1.5 trillion in student debt. Those financial obligations have been blamed for slowing down the nation’s economic engine, as people cite it as a reason to delay buying homes, starting families, and making other long-term investments. (Here’s an interview with University of Michigan economist Susan Dynarski, who testified before Congress earlier this month on the crisis.)

As Dana Goldstein reported for The New York Times, student loan debt has been steadily rising in recent decades. The burden of these loans is being disproportionately borne by African American students, who tend to borrow more than their white classmates – an average of $7,400 more. In a 2018 report, The Wall Street Journal concluded that students at historically black colleges and universities such as Morehouse leave school with significantly higher student loan debt loads than their peers at other schools. African Americans also have more trouble repaying their student loans than white students.

The Washington Post reported that Smith decided to make his surprise announcement just hours before the commencement ceremony, when he learned that a significant proportion of Morehouse students drop out because of financial issues. That’s certainly not an unfamiliar story; a report by the Lumina Foundation determined that college students of color and poor students are least likely to graduate, in part because of financial issues.

2. How much is this gift worth?

Early media coverage put the value at $40 million. But as the Washington Post has subsequently reported, a representative for Smith said he’s only covering loans the students took out themselves (as opposed to loans taken out by family members) totaling about $10 million. The federal government reports that the average debt reported among Morehouse’s seniors is $26,000.

But for many Morehouse students, the student loan debt pales in comparison with the tuition loans their parents have taken out. The federal government typically caps federal student loans at $5,500 to $7,500 a year (depending on the student’s year in college). But that’s typically not enough to cover the school’s costs. Morehouse, like many Historically Black Colleges and Universities, has a small endowment, and so cannot fund large scholarships for needy students. As a result, the annual net cost for low-income Morehouse students – even after subtracting out all scholarships – tops $30,000 a year.

It’s no surprise, then, that more than 900 Morehouse parents took out federal parent PLUS loans in the 2017-18 academic year. The average amount borrowed was about $30,000.

You can look up the average student loan debt for graduating seniors for each school using the federal College Scorecard. To find each school’s federal student and parent borrowing, download the Direct Loan Disbursements data for Academic Year 2017-18 here.

A growing number of organizations, donors and schools have been paying off student loans around the country. Stars like Ellen DeGeneres and Nicki Minaj have paid off some people’s student loans. Foundations like the Central Scholarship Bureau of Maryland pay off some student loan debt. And a growing number of employers are offering partial debt repayment as a benefit.

But several observers have pointed out that the student debt problem is so vast that it can’t be solved by a few generous billionaires or charities. Collectively, Americans owe about $1.5 trillion in education loans. (Yes, that’s trillion with a “T.”) Writing for The Atlantic, Adam Harris summed it up: “(O)ne billionaire can only help so many, and more than 40 million people in the United States have student loans. And no graduation gift can help the millions of young people who never complete their degree.”

A similar point was made by Myles Washington, a 2019 Morehouse graduate who expects to have his tens of thousands of dollars in student loans paid off by Smith’s gift. “I felt a level of survivor’s guilt,” Washington told The New York Times. “There were students that were here that were just as smart and just as talented as us that didn’t have the opportunity because they had to leave early.” That’s why various politicians, such as presidential hopeful Elizabeth Warren, are talking about a national student debt forgiveness program.

4. What questions should reporters be asking researchers about possible impact?

What happened at the Morehouse graduation was akin to a miracle for the fortunate recipients. But it’s also what’s known in economics as a “natural experiment.” Rather than being selected by researchers, the Morehouse grads were chosen as the “treatment group”* by outside forces, in this instance, the billionaire Smith. As education policy researchers and pundits were quick to tell me on Twitter, one reasonable comparison group would be the class of 2018 at Morehouse, an academically rigorous, high-quality HBCU. While not identical to the class of ‘19, the groups would likely be very similar.

That’s enough to potentially glean important data, wrote Vox’s Dylan Matthews: “That enables economists (like those at Morehouse, perhaps) to conduct an analysis 10-15 years from now comparing the incomes, indebtedness, graduate attainment, etc. of members of the class of 2019 to those of the classes of 2018 and 2020. If incomes are markedly higher for 2019ers a decade after graduation than they are for 2018ers, that’s a strong indication that debt relief increases incomes later in life.”

As Matthews points out, there are inherent limitations to such a study. Morehouse isn’t representative of the nation’s colleges – it’s not even a stand-in for HBCUs generally. But there’s no question that the Smith Surprise offers researchers a rare opportunity. Who will be the first to seize it? As Sara Goldrick-Rab of Temple University told me, that’s a whole other story for education reporters to pursue.

Need more background? Check out EWA’s Topics Pages on higher education, where we dig into college affordability, rankings, and much more. You’ll also find links to our upcoming webinars, and write-ups from recent EWA seminars, like this piece on finding fresh story angles on student loan stories.

*Thanks to Jill Barshay of The Hechinger Report for catching that we previously incorrectly referred to this as the “control group.”