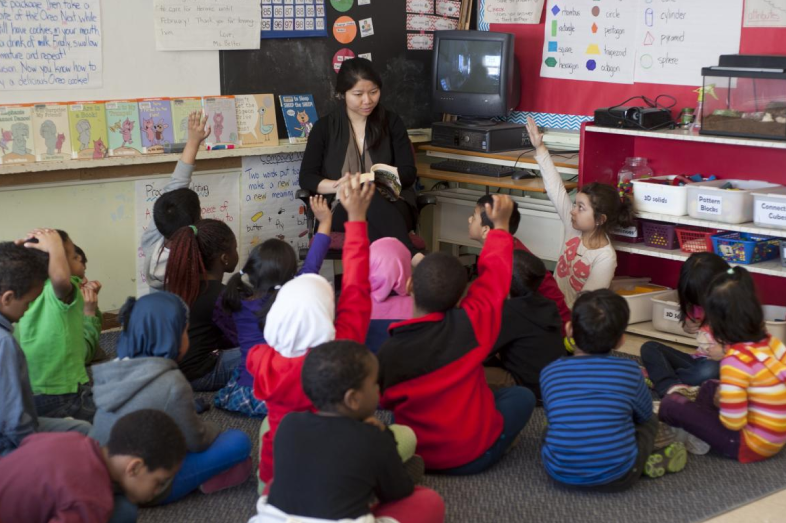 International comparisons in education usually focus on the national level—what countries can learn from one another. But a number of cities in North America and East Asia have teamed up to compare notes and share ideas, including on the tough issue of improving educational equity, a challenge faced by urban systems across the globe.

An education leader from Toronto—one of the participating cities in the Global Cities Education Network—discussed strategies his system is using to better serve low-income and minority students at a recent Education Writers Association seminar for journalists.

One powerful tool is a periodic census of students and parents, said Jim Spyropoulos, the executive superintendent for equity and inclusive schools at the Toronto District School Board, Canada’s largest school district. The census results, which have high response rates, allow the district to identify which populations most need support. For example, recent census results showed that within the district’s population of black students, it was boys of English-speaking Caribbean descent who were especially struggling.

“The census allows us to drill deeper and be data-driven about where we put our energy and focus resources,” Spyropoulos said. “Like our city, our school system is incredibly and richly diverse.”

Identifying which students need help is only the first step, though. The Toronto district provides $8 million each year (out of a $3-billion operating budget) for a Model Schools initiative that targets the system’s 150 neediest inner-city schools. The initiative gives teachers opportunities to learn alongside master educators in classrooms, according to Spyropoulos. In addition, it provides students with access to school nutrition and health programs, such as vision testing. And the program also sends support workers into communities to engage parents and help connect them to school and community resources.

Spyropoulos was joined on the EWA panel by Vivien Stewart of the Asia Society, a nonprofit organization that leads the Global Cities Education Network. She highlighted some of what the participating American cities are trying to learn from others in the network and how cities around the world are trying to better serve disadvantaged students.

The initiative, which is funded by foundations and the cities themselves, gives education leaders opportunities to visit classrooms in other countries and compare notes. The most recent convening was in Shanghai in November.

The U.S. cities currently involved are Denver, Houston, Lexington and Seattle. Other participants in the network include Seoul, Shanghai, Singapore, Hiroshima, and Melbourne, Australia.

The exchange has led to several “a-ha” moments for American cities, said Stewart, a senior adviser for education at the Asia Society. For one, American cities have learned that in many Asian education systems, more attention is paid to recruiting and training teachers. In Shanghai and Singapore, Stewart noted, teachers spend significant time on a weekly basis working with each other to improve their instruction. Every classroom in China, Stewart said, has seats at the back for teachers to observe each other’s work. Seeing how these schools approach teacher learning has led some American cities to question their costly out-of-classroom approaches to professional development.

Participating U.S. cities also have been struck by how some of the high-achieving Asian systems have found ways to place high-performing teachers in almost every school. In Singapore, for example, teachers can be told where to teach. And in Shanghai, a career ladder system creates a strong incentive for teachers to spend some time working in schools that serve low-income families.

Improving equity seems to be a problem that affects every single city, Stewart said. Many cities run programs similar to the Model Schools initiative Spyropoulos described, she said. It’s difficult to compare school funding systems internationally because there are so many factors involved, Stewart said, but we do know that the U.S. unique in tying resource allocation so tightly to local property taxes—“which obviously produces inequities,” she said.

In fact, she noted that high-performing education systems in the network see the U.S. as being ahead in a number of important respects, such as American educational research, the pedagogical practices in some schools here, and the nation’s “highly developed” system of higher education.