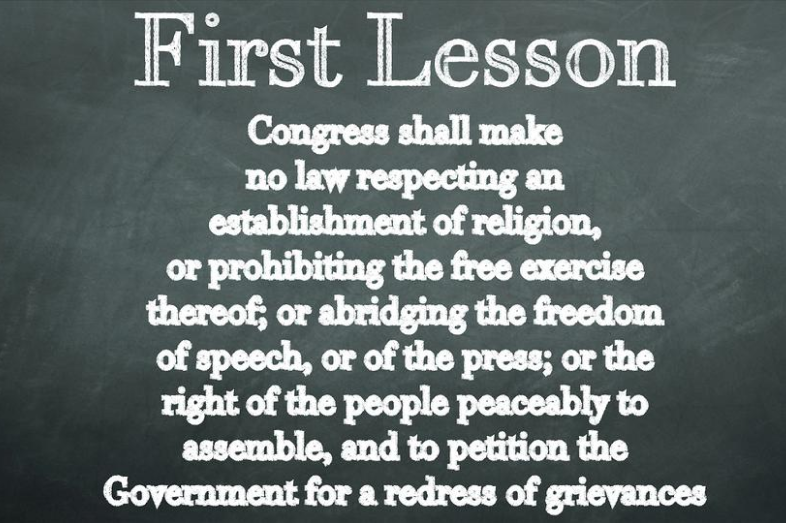 Students at a Pennsylvania high school are getting a real-life lesson in the power of the press – and the many shades of gray that come with First Amendment protections.

The censorship battle is being fought over The Playwickian, the student newspaper of Neshaminy High School in Bucks County, Pa., northeast of Philadelphia. In October 2013, after a 14-7 vote by the student-led editorial board, the paper announced that it would no longer use the word “redskins” because it amounted to an ethnic slur.

“Detractors will argue that the word is used with all due respect. But the offensiveness of a word cannot be judged by its intended meaning, but by how it is received,” the editorial board wrote. The paper also published a dissenting editorial written by the seven students who voted against the ban, contending that “the term reflects back to the district’s heritage; the land on which Native Americans once walked and is depicted as tribute rather than tarnish.”

Neshaminy’s sports teams share their name with Washington, D.C.’s football team, which has also come under fire for a perceived lack of racial sensitivity. (Linguist Geoffrey Nunberg recently offered an explanation of the term’s originations and why it can’t be separatedfrom its hate-filled legacy.)

Principal Robert McGee told the student editors to reverse their decision and demanded that the June issue include a letter to the editor that used the disputed term, according to media reports. The students refused to comply, sending the paper to press without McGee’s permission. As a result of that fallout, the Neshaminy School Board approved stricter controls over the content of student publications.

The repercussions continued: McGee suspended the paper’s faculty advisor Tara Huber for two days without pay, removed student Gillian McGoldrick as editor in chief for the month of September, and docked the paper $1,200 in funding – the cost of the June issue, according to the Philadelphia Inquirer.

Earlier this week a coalition of nearly 20 media organizations – including the Society of Professional Journalists – ratcheted up its support for the Playwickian’s staff. In a letter sent to the groups representing the majority of the nation’s school superintendents, local and state school boards, and high school principals, the coalition recommended a “summit” to “set of standards for educationally responsible governance of journalism education, and for the ethical treatment of student voices in general.” (For more resources on these issues, take a look at the First Amendment Schools initiative.)

“It is disgraceful and an embarrassment that a school district in 2014 would punish students and a teacher for NOT using a racial slur in its student newspaper, not to mention the total disregard for the First Amendment,” said SPJ President Dana Neuts in a statement. “Ms. Huber, Miss McGoldrick, and the other students on the newspaper staff should be commended for standing up for what is right, even though people in positions of authority over them disagree.”

Rulings by the U.S. Supreme Court could also end up being factors in the Neshaminy fight. In the Hazelwood School District v. Kuhlmeier case in 1988, the court determined student newspapers lacking a history of being “open forums” are entitled to a reduced degree of First Amendment protections. But in the Tinker vs. Des Moines Independent School District decision in 1965, the court upheld that students do not yield their constitutional right to freedom of speech and expression “at the schoolhouse gate.”

To be sure, educators are faced with a difficult balancing act. Principal McGee contended that his refusal to allow the ban was intended to protect the rights of other students who might want to use the word “redskins” in materials published in the campus paper, the Associated Press reported:

“(McGee’s) approximately 2,600 students must each publish an article in the Playwickian for course credit. He doesn’t think anyone should be barred from writing about the Neshaminy Redskins, especially, he said, when the harm alleged is open to debate.

“I don’t think that’s been decided at the national level, whether that word is or is not (offensive). It’s our school mascot,” according to McGee, who said he’s consulted with the school solicitor and others. “I see it as a First Amendment issue running into another First Amendment issue.””

The Student Press Law Center in Arlington, Va., argues that the Pennsylvania Administrative Code on freedom of expression overrides Hazelwood since it mandates that “Students shall have the right to express themselves unless the expression materially and substantially interferes with the educational process, threatens serious harm to the school or community, encourages unlawful activity or interferes with another individual’s rights.”

Neshaminy school officials are more interested in “trying to squelch people they feel are problematically independently minded” than in protecting the name of the school’s mascot, said Frank LoMonte, executive director of the SPLC, which is spearheading the coalition backing the students.

“When we get into a prolonged censorship battle like this one, it stops being about the editorial content and becomes the school trying to show who’s boss,” LoMonte told me. “We crossed that line a long time ago.”

While the Neshaminy case might be headed for court, in the meantime it’s providing a valuable example of the power of the media both on and off a high school campus. Regardless of whether the mascot’s name returns to the Playwickian’s pages, the episode has forced the students, school staff and the wider community to engage in civic public discourse. That’s a teachable moment educators – and journalists – might not want to pass up.