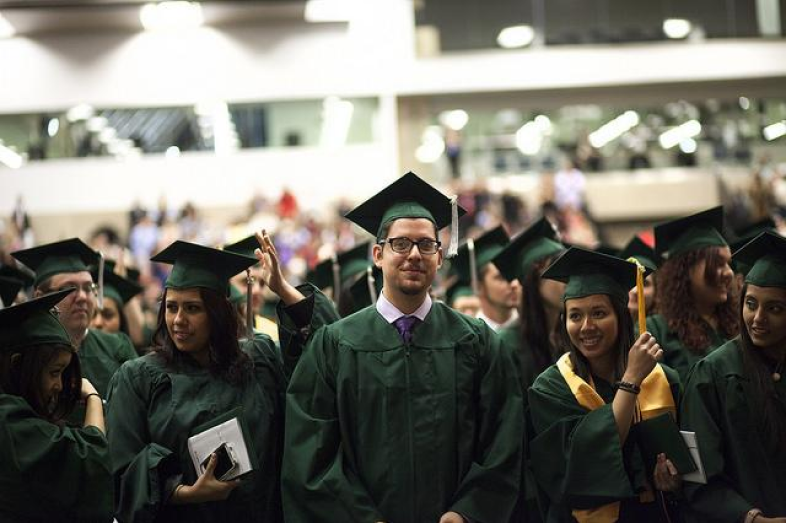 How to Help the 21st Century College Student

When Mark Milliron met with an advertising team to promote a new type of college in Texas, he wasn’t expecting fireworks. Still, the pitch floored him.

It was the sentence that would appear on billboards and in radio advertisements, enticing thousands of working adults to enroll in an online college – Western Governors University Texas. And it totally missed the point.

Milliron says the advertiser asked, “Are you on crack? You’re going to ask people to pay money and sign up to work?”

“And I said that’s the truth,” Milliron recalls. “They’re going to have to work to get there.”

For Milliron and other scholars, higher education is at a crossroads. While universities have come under increased scrutiny for rising costs, they’re still the best tickets future workers have to securing long-term financial stability – if those students graduate. And while the United States is adept at enrolling college students, nearly half of those students will not have earned a degree after six years.

What services do colleges need to provide students to keep them on track, midterm after seemingly never-ending midterm?

Three experts on what the college experience should look like weighed in at the Education Writers Association’s Higher Education Seminar last week, hosted by Southern Methodist University in Dallas.

First on the list? Money matters, but the way states are funding their public universities at times hurts student achievement, said Michael McLendon, academic dean and a professor at SMU’s college of education and human development. Last week, he collaborated with other scholars to release 11 reports that offer a grim assessment of popular higher-education reforms.

And with money tighter, states have started to link student performance to institutional funding. One study from the batch of reports that McLendon helped produce suggests those reforms can lead to worse student outcomes.

Merit aid, another popular higher education line item that awards students scholarships for performing well in high school, was also in McLendon’s crosshairs. He pointed to research that showed that while merit aid spending may be politically popular, such money mostly helps students who would attend college anyway. Crucially, increases in merit aid funding lead to reductions in need-based aid, money that goes to students who may otherwise not attend a university, the research found.

“Our states’ policies are utterly misaligned with the goal of increasing higher education attainment — and misalignment being a polite word for failing,” McLendon said.

But even without the funding shortages, the public may overstate the role that universities and colleges have in helping students complete a degree.

“We’re very enthralled with rankings. … And we really want to believe that the institution is a great influence on its students,” said Alexander McCormick, a professor at Indiana University and the director of the National Survey of Student Engagement, a widely used student college student survey. “But in my work, and in the work of most scholars who examine outcomes and returns in higher education, the lion’s share – 90 percent – of all the variability in outcomes is not from one institution to the next, it’s from one student to the next.”

In many ways, a school is only as good as the students it accepts, with wealthier and higher-performing high school students in general gravitating to higher-ranked colleges. The rest go to less selective schools or ones that enroll virtually anyone with a high school diploma or GED. Meanwhile, nearly 2 million college students are parents who work full time– responsibilities that chip away at the hours they have to study.

Wealthier students, and those whose parents completed college, often are more prepared with the soft skills of navigating the maze of duties required to graduate on time. Milliron noted that he was the first in his family to attend a higher education institution. Without the know-how from those close to him, choosing the right school was difficult for him, and he settled on a community college in Arizona. His children, however, grew up wearing “UT-Austin onesies,” he joked; for them, the goals of entering and completing college are a given.

Still, colleges have an array of options for helping working students and first-generation college-goers. Many schools offer university 101 classes, which are courses that teach students how to study, ask questions, and budget their time. Other schools offer mentoring services that are meant to connect students with support staff who can keep them on track for graduating. But employing mentors may not be enough. McCormick of Indiana University recalled that a recent National Survey of Student Engagement found that 10 percent of students reported never meeting with an academic advisor.

“It’s crazy that we can expect students to self-regulate,” said McLendon.

There are other innovations underway. One is borrowing from massive Web-based companies that analyze user preferences to recommend purchases. Milliron says schools are awash in the data needed to steer students toward courses that’ll help them graduate on time. For example, one of the major culprits in students’ quitting on college is taking too many of the wrong classes. Clarify what courses they should take, the thinking goes, and more students will reach the academic Promised Land.

Milliron also projects an overhaul of the typical class schedule, yielding to a future in which a student takes, say, two in-person courses, one online class, and another competency-based course in the same semester.

The shift toward targeted student services can be illustrated by where college spending has risen. A report by the Delta Cost Project found that expenditures for professional, non-faculty staff members responsible for student services grew the fastest in many colleges between 2002 and 2012.

And this may be the new normal. “The last 100 years of higher education in America has been the age of access innovation. The next 25 years, especially going back the last five, will be the age of success innovation,” Milliron said. “There’s just a lot more emphasis on success indicators.”