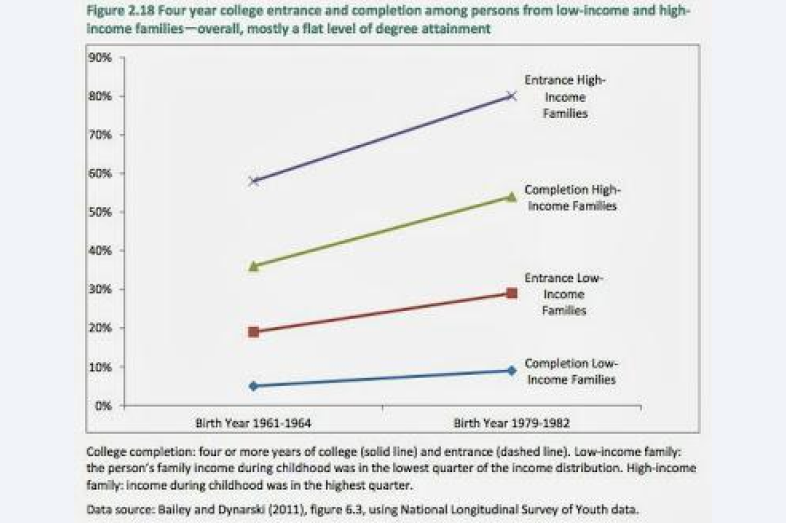 Competitive colleges in the U.S. have an image problem: By many accounts, their student bodies are much whiter and richer than the general population. Over at The Hechinger Report, Jamaal Abdul-Alim reports on a program aimed at steering academically high-flying low-income and minority students to the nation’s top-ranked universities.

Called College Match, the program sends advisers to high schools where low-income students with top grades and test scores may not realize they’re strong candidates for schools like Cornell or the University of California system. The program is part of a growing effort led by policymakers and scholars to address  the “undermatching” phenomenon: students with the grades to attend strong colleges who don’t even apply for admission.

For example,  a recent study calculated few of the 25,000 – 35,000 low-income high-school students with strong academic portfolios apply to the nation’s 238 most selective colleges and universities. In Chicago, where College Match took off, a report found that only a third of such students applied to a selective higher education program.

During EWA’s 2013 National Seminar at Stanford, the economist who popularized the concept of undermatching explained some of the reasons poor students attend less competitive schools, or don’t go to college at all:

[Caroline] Hoxby’s research has revealed a number of insights into why high-achieving low-income students don’t apply – even though they are well matched with certain colleges, and still others would have been “safety schools.”

“Either it was: ‘I don’t want to leave my community and my family and my friends’,” she said. “Or: ‘I have a high school counselor. They tried to give me advice, but I didn’t get the advice I need to get through this process.’”

College Match isn’t the only intervention to address undermatching. Hoxby and others experimented with sending application fee-waivers of top schools and other information to high-achieving, low-income students. The packets cost $6 per student, and the targeted group applied to elite institutions at higher levels than they would otherwise. College Board is now scaling up the effort to reach more students.

But undermatching is not without its critics. From The Chronicle of Higher Education:

“In the end, the focus on undermatching is friendly to the status quo, says Anthony P. Carnevale, director of Georgetown University’s Center on Education and the Workforce. “It is uncritical of the selection system. It basically says keep doing things the way you’re doing them and we can find a few more exceptions to the rule and go on and admit all the rich kids.””

Nor do efforts meant to compensate for undermatching address the challenges low-income students face once they’re enrolled. Such students enter college with experiences that often leave them emotionally and socially unprepared for the rigors of college. But researchers have come up with interventions to address the culture shock some of these students face. Known as mindset growth and often associated with terms like “grit” and “persistence,” small-bore efforts aimed at boosting confidence can have big returns. David Yeager, whose research was the focus of a major New York Times Magazine article in 2014, spoke at EWA’s 2014 National Seminar at Vanderbilt:

“Yeager said modest interventions have increased by as much as 50 percent the college persistence rates of urban charter-school graduates. Studies of college freshmen at the University of Texas at Austin and Stanford University have shown that these interventions can reduce achievement gaps by half.

“They come across as magic tricks, as in sleights of hand,” Yeager said of the interventions.”

But as he and other researchers have found, tackling students’ self-perceptions about their academic abilities is one of several tools policymakers can use to add diversity to our nation’s higher education institutions.