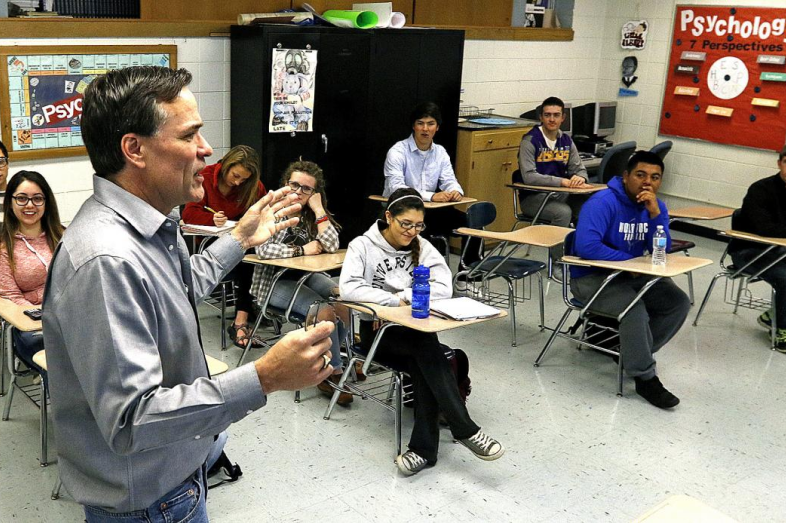 Participation in the Advanced Placement program has more than doubled over the past decade, with nearly 2.5 million students taking one or more AP exams in 2015. But with that growth has come questions about the push to ramp up the AP presence, especially initiatives that target low-income and minority students.

How well do AP courses prepare students for the rigors of college? And are students who may lack adequate preparation benefiting from the coursework?

At the Education Writers Association’s national seminar in Boston last month, panelists explored these and other questions about the College Board’s AP program.

Philip Sadler, the director of the science education department at Harvard University’s Smithsonian Center for Astrophysics, questioned the value of taking the courses, especially for students who don’t earn a passing score on an AP exam.

After conducting three studies of more than 20,000 students, his conclusion: Students who do not score a 3 or higher on an AP exam appear to get no benefit. Their grades in college don’t go up at all. They don’t perform significantly different from kids who never took an AP course, Sadler said. (AP exam results are scored on a scale of 1 to 5, with a score of 3 or higher generally seen as a passing score.)

“Kids who get a 1 or a 2 on their science AP exams don’t seem to have benefited in the least from that experience,” Sadler said at the EWA event. “So it’s not a huge effect.”

Students who “passed” the AP exam earn grades 6 points higher than average later in related introductory biology, chemistry, and physics courses. (Ten points is the equivalent of a whole letter grade.) But once researchers controlled for students’ socioeconomic status, their grades in previous courses, and their parents’ career, they found students who take an AP course on average do about 3 points better when they take science courses in college. There was no measurable benefit, in terms of college grades in science, for students who “fail” an AP exam (a score of 1 or 2).

Jason Manoharan, a vice president at the College Board, didn’t dispute Sadler’s research findings during the discussion in Boston. But he made the case that the College Board’s AP courses are a powerful strategy to better prepare young people for college. He said even for students who score a 1 or 2 on an AP exam, there is evidence they are more likely to graduate from college on time compared to their peers.

“Just the experience of building the rigorous skills that would help them later on to handle college work is the most valuable thing about AP courses,” said Melendez-Quintero, who developed a program to encourage Latino students to take AP classes at South High Community School in Worcester, Massachusetts. (She left that school in 2015, and is now the head of the guidance department at a public high school in North Attleborough, Massachusetts.)

Melendez-Quintero said many Latino students arrived at South High academically behind, already thinking they were not college material. She recalled one student who was lagging in English and Math and wanted to go to college. The student decided to take an AP course.

Although Sadler said AP classes expose students to some elements of a college curriculum, the conditions are often quite different from a university setting. In an AP course, he said, the class size is typically small, the teacher keeps tabs on students every day and monitors their progress. That doesn’t happen in college, he said.

“So it’s a way to learn some of the content of a college course but it doesn’t really reflect what kids are actually exposed to in college in terms of what the learning milieu is,” Sadler said.

Manoharan of the College Board said the AP expansion is important, but it is not a panacea for public education.

“Simply parachuting a kid who is ill-prepared for an AP course into an AP course will not make that kid college-ready,” he said. “It cannot make up for systematic achievement gaps that start from kindergarten.”

But he agreed with Melendez-Quintero that the AP experience helps students see college as a possibility.

Manoharan also stressed that many more students who show evidence that they can succeed in rigorous AP courses are missing out on the opportunity.

He said 10th grade PSAT scores show hundreds of thousands of students have “AP potential,” which means a better than 60 percent chance of earning a “3” or higher on an AP exam. But they don’t take them.

Of African-American students whose PSAT scores place them in this category – only half take an AP exam.

In 2011, when Melendez-Quintero saw that out of 500 Latino students at South High Community School, only 35 were taking AP classes, she set up the Latinos Excelling in Advancement Placement program, or LEAP.

It started with a summer boot camp focusing on study skills and getting kids ready for AP courses. District coaches reviewed textbooks to help teachers with strategies for conveying content to English language learners.

LEAP coordinators helped families understand that students needed a place to study at home, and that homework in an AP class might take two hours a day. The school also provided after-school and Saturday study sessions and paired students with college tutors.

Melendez-Quintero said parents were a big ally. In the first week, half of kids who signed up for an AP course wanted to drop it.

“We needed the parents to say, ‘Absolutely not, you’re staying in the class. You signed up, you know the benefit, you’re willing to do the work. I know it’s scary but we are here to support you,’” she said.

The number of students in AP courses that year jumped to 86 and the number of qualifying scores of 3 or higher doubled, she said.

Many districts embarking on a big AP expansion, though, have seen drops in the pass rate. (The Chicago Tribune, for instance, reported in January that the AP passing rate in Illinois has declined, including at many schools that in the past few years have aggressively raised their AP participation rates.)

But over time, said Manoharan, those rates will rise.

He noted that only between 35 and 37 percent of all students take an AP exam. Over the past 10 years, the proportion of kids passing an AP test  (with a score of 3 or higher) has remained steady at 60 percent.