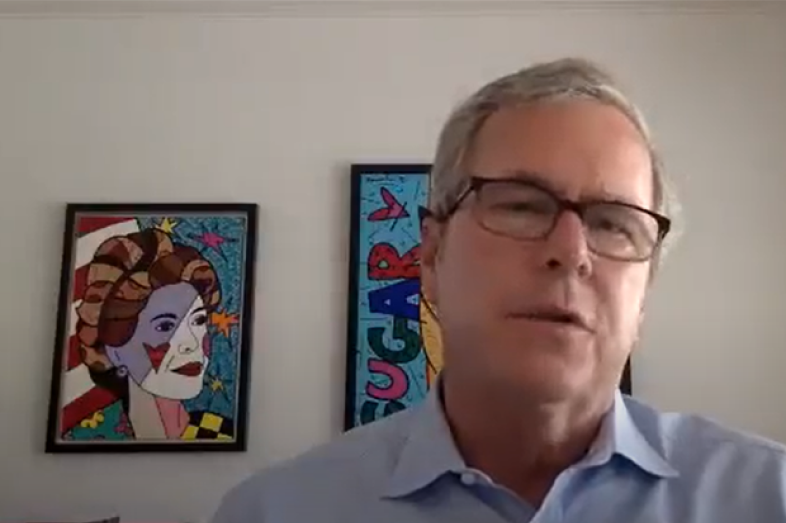 Author: Ben Felder of The Frontier for EWA
Back to Skills

Cable TV shouting heads can make it seem as if party politics — more than research — guides stances on how education leaders should respond to COVID-19. But in a conversation with education journalists, one prominent Republican outlined potential divisions among those who identify as conservatives.

Although conservatives traditionally want to limit government expenditures, Bush, who describes himself as a “classic conservative,” told education journalists attending a July 24 plenary at the Education Writers Association’s 2020 national conference that this crisis “is too important. …You cannot be paralyzed because of the additional cost.”

Partisan bickering that stalls funding for projects such as fixing the “digital divide” for low-income families “is going to accelerate the social strife and the differences between classes in our country at a time when we need to be figuring out ways to make sure that people have a quality education and have a chance to rise up,” he said.

“You’re going to see low-income kids, particularly, fall way, way behind. That has long-term social, cultural and economic impacts that are very devastating,” he said.

Bush, who is the president of the Foundation for Excellence in Education, a nonprofit he founded, also reiterated his long-held support for leaving schooling decisions, such as reopening, to state leaders, and for tax-supported vouchers families can use to pay for private schools — even if those schools discriminate against LGBTQ job applicants.

Immediate changes are needed to provide access to high-quality education to all because the economic shutdown is likely to permanently destroy millions of jobs, he said.

“The number of people that are going to be structurally unemployed because they never got the skills necessary for the next generation of jobs is pretty compelling,” he said, adding that educators and policymakers should “focus on making learning lifelong and [equalizing] access to opportunity.”

More Money for all Types of Education

The role of the federal government should be to provide financial support for schools to navigate the pandemic, along with addressing the learning gaps created by the closure of schools in the spring, Bush said.

In addition, government needs to address inequitable education funding, he said. “The systems in place in most states as it relates to funding are not equal … as lower-income students typically get less attention financially than kids in affluent neighborhoods,” Bush said. “Kids in low-income schools are deserving of per-student expenditures that are greater because the need is greater.”

That taxpayer support should go to all types of schools, Bush argued — not just public ones — perhaps in the form of the kinds of voucher programs he helped to create for Florida in 2009 that allow parents to choose among public and private schools.

“I don’t view public education as a system that needs to be supported at all costs. Students and parents need to be empowered to make choices. And when they are, public schools get better,” he said.

Bush said it was appropriate for the state and federal governments to provide financial relief for private schools during the pandemic because the closure of private schools would force many families to return to a public school system “they didn’t want.”

“Giving parents choices and making sure that they know what the options are is as American as apple pie,” the former two-term governor said.

Bush’s Foundation for Excellence in Education promotes voucher programs as well as other parts of the “Florida formula” he used to boost test scores as the state’s governor in 2009. The foundation also suggests grading schools on an A-F scale based on their standardized test scores; requiring third-graders to pass a reading test in order to advance to fourth grade; and giving families more access to charter and online schools.

Vouchers and other government support of private schools have come under fire recently, in part because of an Orlando Sentinel investigation that found that some families used vouchers to send their children to private schools with anti-LGTBQ policies.

Responding to questions about his support of the program from session moderator Moriah Balingit, of the Washington Post, Bush said there should be no discrimination against students, but that hiring policies are a different matter. “The amount of so-called discrimination is very small, given the robust nature of these programs … They were very few, isolated cases. And the places where they didn’t disclose these policies in advance, I think they need to change that.”

[Editor’s note: See the Orlando Sentinel’s response to these remarks at the bottom of this post.]

“I think there has to be a way where we protect people’s rights and also recognize that there is a question of religious liberty at stake as well,” Bush said. “And I think there’s a way to do that. When you sign up to go to a Christian school, there ought to be total clarity about what the bylaws of the school are. They shouldn’t try to hide anything. And parents can make the choice of whether they would want to go to that school or not.”

However, Bush said private schools should not practice “conversion therapy,” which is an effort to change a person’s sexual orientation.

“That’s not their job. Their job is to educate,” Bush said.

Addressing Inequities Through Data and Accountability

Besides providing funding and parent choice, Bush argued that solving inequities in education requires more data and accountability. “There needs to be much better data about tracking how students do, not just in the K-12 experience, but how they do after. Do they get a four-year degree? Are they able to get a job?”

Some states have adopted assessment strategies that set different benchmarks for students, depending on some identifiers, such as income level. Bush said he believed that practice perpetuates low performance among some student groups.

“You can easily see why people would say it’s not fair to have the same expectations for a low-income kid than a kid that has lived a life of privilege,” Bush said. “But if you create lower standards for kids that don’t have the same access to the benefits of affluence, then you are going to get that result.”

Balancing COVID-19 Against Other Risks

Bush urged education leaders to balance the health risks of the coronavirus against the risks of not reopening schools. The potential increase in domestic violence, drug use, child abuse and the loss of academic attainment while school buildings are closed should also be considered, Bush said. Partisan politics should not be a factor, however, he argued.

“I think we need to look at this in the broadest context possible of the social impacts, the economic impacts and the health impacts and open up safely,” Bush said.

“There is a common sense way of doing this and the first step is to stop the nonsense of politicizing everything, on both sides,” he said.

Instead, Bush said, “We ought to be asking what are the conditions to create the safest possible environment [for in-person school], while recognizing that the world is not risk-free.”

“Maybe schools can delay for several weeks or a month, maybe they go in a hybrid format. That ought to be determined in a bottom up way by school leaders in every school district in this country, and then governors and (state) legislatures can provide support for those strategies.”

Reopening Decisions Should Be Made Locally

Bush said he personally hopes schools promptly resume in-person learning, but quickly added that such decisions should be left to states.

“I think having a one-size-fits-all approach on opening would not be appropriate. … I’m a Tenth Amendment guy; I think these decisions should be made at the state level,” said Bush, when asked about efforts by President Donald Trump and U.S. Education Secretary Betsy DeVos to pressure schools to reopen buildings to start the new academic year.

Speaking from his Florida home, with a colorful portrait of his wife behind him, Bush said that the hurricanes and other natural disasters he confronted as governor were not as broadly devastating as the pandemic, but those crises nevertheless taught him some important leadership approaches.

“I learned a lot. You have to have a command of the facts,” he said. “You have to be honest and truthful with people. You have to show empathy for their plight and you have to give them hope. You have to say, ‘Look, there’s a rocky climb. We’re all going to climb up together. But there’s a lush green valley on the other side of this hill. Let’s get on with it.’ ”

Response From the Orlando Sentinel

But we don’t have a way of knowing how many students were refused admission at these schools or kicked out, as private schools do not report this information publicly.

All we could do is try to document how many schools have anti-LGBTQ polices based on publicly available information.

In Florida last year, 156 private Christian schools with anti-gay views educated more than 20,800 students with tuition paid for by state scholarships. That means at least 14 percent of Florida’s nearly 147,000 scholarship students last year attended private schools where homosexuality was condemned or, at a minimum, unwelcome.

At 83 of these schools, administrators refuse to admit LGBTQ students or could expel them if their sexual orientation or gender identity were discovered. Some also refuse to educate students whose parents are gay or to hire staff who are gay. The other 73 have policies that condemned homosexuality, for example, but did not spell out how those views played into admissions or discipline decisions.

Those 156 schools received more than $129 million from Florida’s scholarship programs.

Also, we found that most of the state’s Catholic schools were silent on their websites about how they treated gay students. But the Florida Conference of Catholic Bishops opposed legislation that would ban discrimination against LGBTQ students at private schools that take state scholarships. The state’s Catholic schools educated more than 25,000 scholarship students last year.

Finally, we wrote our story after reviewing websites of more than 1,000 private schools. Not all schools make their policies public; a few don’t even have websites. Some moved their policies behind secure parent portals as we were doing our reporting. Others cite church policies or Biblical passages, requiring further digging to determine their meaning. So the bottom line: There may be even more schools with anti-gay policies than the ones we were able to document.