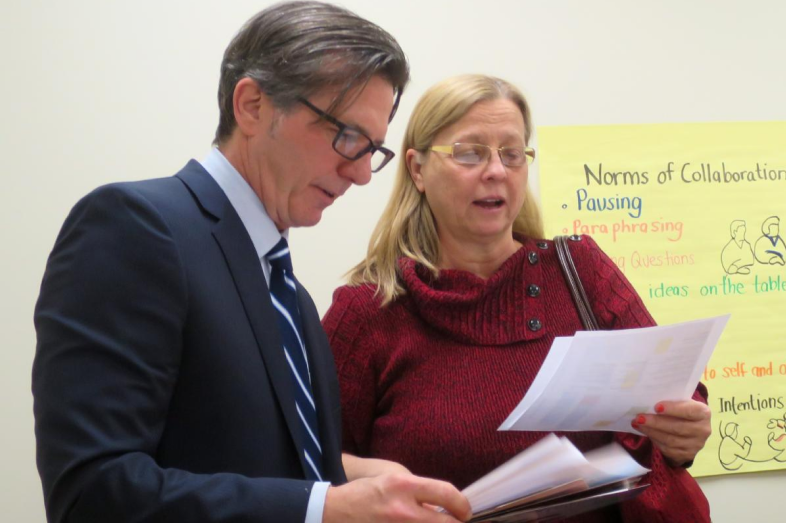 Like many of their counterparts across the country, 10th graders at the School of Business and Tourism, part of the Miguel Contreras Learning Complex near downtown Los Angeles, read To Kill a Mockingbird. But they also read the works of self-help writer Dale Carnegie. Eleventh graders study The Great Gatsby but earlier in the year they pondered Contagious: Why Things Catch On, by Jonah Berger.

Combining academic and career classes is key to the School of Business and Tourism. It shares this approach with other schools in California’s Linked Learning initiative. All of them offer a program centered on an industry theme, called a pathway, integrating the career focus into classes and projects throughout the school day. The idea is to combine the academic strengths of a college-preparatory program with the real-world relevance of career and technical education.

“It’s not that every child who comes here is gong to be a business person,” but they will learn skills that they can apply in other areas, said Esther Soliman, the administrator of Linked Learning for the Los Angeles Unified School District.

Don Wilson, one of two Linked Learning directors for Los Angeles, said these skills are particularly important for low-income students. More than 90 percent of students at Business and Tourism qualify for a free or reduced price lunch.

Much of the school’s focus is on professionalism. Throughout their four years, students work on business projects and interact with outside professionals. They “dress for success” — wearing business attire —  every Wednesday. Business people critique videos of mock job interviews with the students and provide other feedback. Many students have internships.

“We want our students to have a real connection to the world in the work they do here,” said principal Dalton Cole, and to develop business skills in such areas as sales, marketing and entrepreneurship.

Along with a complement of traditional academic classes aligned with the Common Core State Standards, every year students take a course geared to the school’s theme, such as cultural geography in their freshman year and ecotourism as sophomores. Juniors study entrepreneurship, working on computers to plot a firm’s fixed and variable costs and develop risk analyses for companies. The final project is to create a business plan for a tour company. Seniors run a virtual company and participate in the Virtual Enterprises International competition.

As their culminating project, 12th graders at the school work in groups of three to identify a problem or need, design a product to address that issue, and come up with a way to market it. In a class visited by members of the Education Writers Association earlier this year, one group considered what they might invent that could help travelers whose luggage is lost, while another trio suggested that people need a better way to measure their body fat. A third group proposed creating an app that would let passengers know whether their bus is going to skip a stop.

Student Andy Gonzalez said this could be profitable “since a lot of people in Los Angeles take the bus.”

So far, no product has gone commercial, but school administrators say students have started other businesses using the skills they acquired at the School of Business and Tourism. One launched an enterprise working with other students on their resume writing and interviewing skills.

Linked Learning schools in general, and Business and Tourism in particular, believe internships can play an important role in a student’s education. Senior Roberto Diaz worked in the structural drafting group at the Los Angeles Department of Water and Power, transferring designs to a computer.

“It’s a different setting. It makes you more independent,” he said.

Business and Tourism started 20 years as a small learning community, a reaction against the large comprehensive high school, says lead teacher Yolanda Salazar, who was there from the beginning. Today, its approximately 460 students share the Miguel Contreras Learning Complex with three other schools. Contreras and three other buildings make up the Belmont Zone of Choice, where eighth graders can select from among 17 high schools. The schools do not screen students.

Having honed the combination of academics and career preparedness over 20 years made Business and Tourism a clear candidate for Linked Learning, which also emphasizes group work and interdisciplinary projects. Schools provide career and academic pathways in fields including health science and medicine, engineering, education, arts and business. By next year, one-sixth of Los Angeles high schools will be Linked Learning schools, according to Soliman.

“They all offer the regular classes but there’s an expectation that every semester kids are producing an interdisciplinary, project based activity,” says Wilson.

A study of Linked Learning, conducted by SRI International in 2015, concluded that students in California’s Linked Learning schools were 3.7 percentage points more likely to graduate from high school than their counterparts in traditional public schools and were just as likely to complete college-preparatory courses as other students.

Business and Tourism reports outcomes that compare favorably to numbers for Los Angeles public schools as a whole. It cites, for example, an 80 percent graduation rate against 74 percent for the district.

As he prepares to graduate, Daniel Kim believes the school has opened his eyes.

“Knowing that anything in this world connects to business make me want to learn more,” he said. “There is creativity in virtual enterprise. Business is not black and white; it’s colors.”