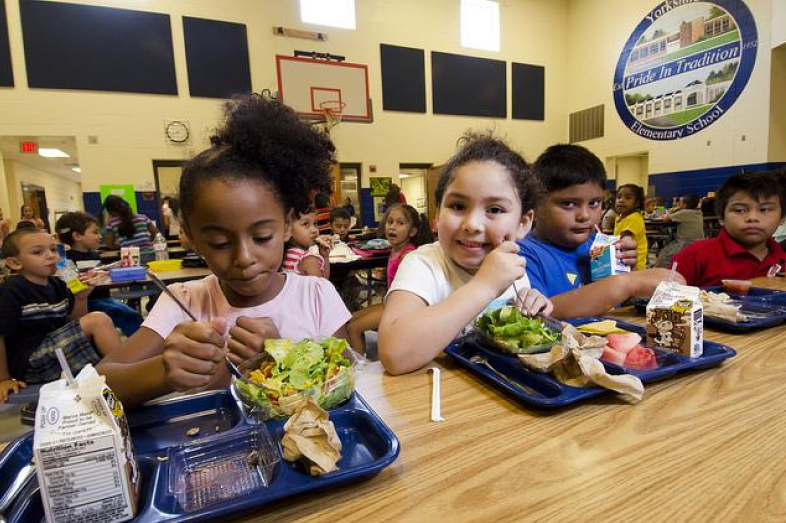 Students in public schools are eating healthier cafeteria meals made from an increasing array of locally sourced food, according to new federal data from the U.S. Department of Agriculture.

The USDA surveyed school districts to evaluate the impact of “farm to school” programs in place at over 42,000 campuses (find out more about the national network supporting these initiatives here). More than 10,000 districts provided input – a response rate of 60 percent on the survey. Among the findings: Nearly $600 million in locally produced food was purchased by schools in the 2013-14 academic year, a 55 percent increase over 2011-12 (when the first Farm to School census was conducted). More than half of the census respondents said they planned to increase their local food purchases in the coming year.

The new data come as Congress is debating whether to renew the Healthy, Hunger-Free Kids Act, which took effect in 2012. The act brought stricter standards to publicly funded school lunchroom menus, including a greater emphasis on fruits, vegetables, and whole grains, as well as promoting foods lower in saturated fat and overall calories. A 2014 survey by the Pew Charitable Trusts, the American Heart Association, and the Robert Wood Johnson Foundation found seven out of 10 parents supported the new standards.

But not everyone is thrilled with the new menus. The School Nutrition Association is lobbying for changes, claiming the standards have reduced participation in the school lunch program, are costing districts financially, and have led to more food being thrown away because students don’t like it. The SNA, which represents school meal providers, points to a Government Accountability Office report which outlines the many challenges facing school cafeterias as a result of the new rules.The group also disputes key arguments made by the regulations’ supporters. (U.S. Secretary of Agriculture Tom Vilsack responded to some of the most common criticisms of the school nutrition standards at a recent National Press Club event.)

In addition to factors like the quality and variety of the food offered and the eating habits students bring with them to campus from home, there’s another element Vilsack says needs closer attention: time.

At many campuses, students have less than 20 minutes to eat, giving a new meaning to “fast food.” Crowded high schools also use so-called “nutrition breaks” instead of lunch hours so they can start funneling kids through the cafeteria in the mid-morning hours. And in the younger grades the lunchtime is often tacked on to recess, which means kids have to choose between eating and going outside to play.

“I don’t think we’re asking schools to do too much,” Vilsack told me in a telephone interview Monday. Rather, the problem is “we’re asking them to do it all in too brief a period a time … not just to feed students, but to educate them.”

To be sure, signing on to farm-to-school initiatives requires a significant commitment of time and resources from participating districts. The individual responses from local school districts detail how much they’ve spent on locally sourced food, the number of campuses involved in the program, and more. Reporters looking for stories on school meals can compare total expenditures, find out which local products were the biggest purchases and evaluate what gains, if any, the district reported.

Pay close attention to the differences in reported data among neighboring districts in the same state. Did one set of schools have a more positive experience? If so, why? In some cases, like Baltimore County Public Schools, districts reported that they had to rely on their contracted food service vendors  to find the locally sourced items. If locally sourced items weren’t on the menu, what was served instead? (It’s also worth checking whether any local farmers or ranchers bid for those contracts.)

The new census data follows a flurry of studies on school nutrition in recent months, in some instances yielding contradictory results about the impact of the new federal regulations.

Here are just a couple of recent examples:

A Vermont study used photographs of students’ trays before and after meals to gauge which specific food items weren’t being eaten. (Spoiler alert: The green beans were particularly unpopular.)  The researcher concluded “Children consumed fewer [fruits and vegetables] and wasted more …during the school year immediately following implementation of the USDA rule that required them to take one fruit or vegetable at lunch.”

The University of Connecticut compared the lunchtime eating habits of middle schoolers at 12 campuses in a low-income district between 2012 (before the federal rule change) and 2014 (after the new rules were in place). Summing up the findings for the journal Childhood Obesity the researchers wrote: “Students responded positively … consumed more fruit, threw away less of the entrees and vegetables, and consumed the same amount of milk. Overall, the revised meal standards and policies appear to have significantly lowered plate waste in school cafeterias.”

Does one of these studies override the other? Not necessarily. Rather, they both highlight the difficulty in measuring something as variable – and varied – as students’ eating habits, which are strongly influenced by their lives outside of school. And this is a good example of the thoughtful lens that needs to be used when weighing the relative value of education research.

Even the Vermont researcher, Sarah Amin, told WBUR Radio her findings shouldn’t be used to doom the new standards. Many students weren’t used to choosing a fruit or vegetable with lunch, Amin said, and there could be a steeper learning curve for older students whose food preferences are more firmly set, compared with kindergarteners whose palates might be more malleable.

The USDA is trying to address some of the logistical factors and encourage innovation, according to Secretary Vilsack. That includes grants aimed at helping districts, especially those in rural and less-affluent communities, update their kitchen equipment to offer tastier campus fare. A federal program encouraging school gardens is also boosting healthy eating, as students have a sense of pride in eating fruits and vegetables they’ve helped to grow, Vilsack said.

I asked Vilsack what would be considered a “win” for the new nutritional standards – perhaps media outlets in other countries running photos of American school lunches and sighing with envy, rather than the other way around?

But Vilsack offered more trenchant goals highlighting the very serious challenges facing this country at either end of the nutritional spectrum. He wants to see a continued decline in two groups of children: those who don’t have regular access to adequate nutrition — known as “food insecurity” — and those who have obesity-related health conditions.

“To me,” Vilsack said, “that’s headed in the right direction.”