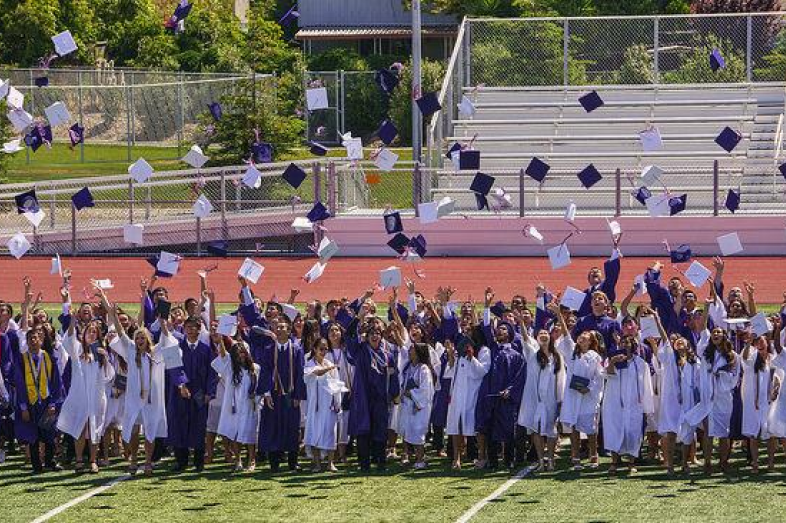 The U.S. Department of Education is celebrating a new milestone for the nation’s high school graduation rate, with just over 82 percent of seniors earning diplomas in 2014. But these statistics, like so many others in the education realm, should come with a warning label: The numbers don’t tell the full story.

While this marks four consecutive years of improvement, and a record high nationally, the GradNation campaign — a leading organization pushing to improve outcomes and opportunities for high schoolers — called Tuesday’s news “sobering.” Here’s why: Eighty-two percent was still a few tenths of a percent short of being on track for meeting the campaign’s goal of a 90 percent graduation rate by the year 2020. And there are still significant gaps in the performance of  black and Hispanic students, kids from low-income families, and English-language learners.

The campaign – consisting of the Alliance for Excellent Education, America’s Promise Alliance, Civic Enterprises and the Everyone Graduates Center at Johns Hopkins University –  said in a statement that while there is reason for optimism, it won’t be an easy haul:

“We must remain diligent and steadfast in our efforts to implement what we know is working – including heeding early warning signs and surrounding students with more caring adults both in and outside the classroom – and to eliminate what we know is not working, including suspension and expulsion policies that have a disparate impact on young people of color and students with disabilities.”

(U.S. Secretary of Education Arne Duncan has also acknowledged there is still plenty of work to be done.)

Here’s what we do know: The national graduation rate is a far more balanced picture today than it was just a few years ago, when states used a wide range of methodologies for measuring high school completion. Since 2010, per an agreement among the nation’s governors, every state uses the same formula, known as the cohort graduation rate. In 2012, for example, Clayton County in Georgia reported that its high school graduation rate sunk from 80 percent to roughly 52 percent after officials in Atlanta adopted the new formula.

So while we are now able to more fairly make comparisons among states and the cohort graduation rate is considered a more accurate barometer than the prior formulas many states were using, it’s still a complicated story. And as NPR’s education team reported over the summer in a multi-part series, the news wasn’t all good. In some cases, districts were gaming the system by moving kids out of traditional classrooms in order to hide their poor achievement.

Indeed, Becky Vevea of WBEZ Chicago (in a project with Catalyst Chicago) cast a critical eye on the Windy City’s graduation rates. The picture wasn’t quite as rosy as the one the school district had portrayed. Students had been “mislabeled” as having left town or enrolled in private schools, when in fact they had dropped out, transferred to one of the city’s alternative programs, or attempted to pass the GED. The mislabeling had the effect of improving the district’s overall graduation rate for the students who remained in the traditional schools. Chicago Public Schools later revised its figures, lowering the most recent graduation rate to 66 percent from 69 percent (still 10 percentage points higher than what it was in 2010).

To be sure, there are encouraging examples of innovative programs and instructional models that are clearly making a difference for high schoolers. One of Chicago’s more successful initiatives involves targeting ninth graders who are deemed at risk of dropping out, and surrounding them with support. In New York City, a mentoring program has made a big difference in reducing truancy, and the graduation rate has inched up accordingly.

In fact, the GradNation scholars argued that large school districts have been leading the way in driving down the dropout rate among high school students since 2011, with more than 40 percent of the 500 largest districts posting graduation rate gains that were higher than the national average.

A report earlier this year by GradNation concluded that the uptick nationally was due to intensive school-based interventions and not just the improving economy. Indeed, black and Hispanic students are graduating at higher rates — which is boosting the overall figure — although they still lag significantly behind their Asian American and white peers

A critical factor in the improving graduation rate has been the closure of what Education Secretary Duncan once labeled “dropout factories” – high schools where failure was so entrenched it actually made sense to shut the doors and start fresh. According to researchers, the number of these persistently low-achieving high schools is down 47 percent over the past decade. Over the same period, 1.7 million more students earned diplomas than would have been the result if the graduation rate had stayed the same.

In some cases, former dropout-factory students transferred to other campuses with better programs and services. In other instances –such as the approach taken by New York City –  high schools were divided up into smaller school-within-a-school settings, to give high-need students the benefits of smaller learning-environments.

But it’s fair to ask, as NPR did in its series, whether higher graduation rates are the result of states lowering the bar for earning a diploma. Did states reduce the number of upper-level math classes a student needs to complete to graduate? Or lower the minimum passing score on the required exit exams? Or, as was the case in Texas, do kids now have the option of replacing advanced math with vocational classes? That’s not necessarily a negative circumstance: There’s been a resurgence in recent years for career and technical education, bolstered by research that students do better in school when they can link their studies to their interests and career goals.

Why does this matter? A high school diploma won’t get you very far in today’s labor market, with most jobs that pay more than minimum wage requiring some kind of advanced certification. High school dropouts are finding themselves cut off from many postsecondary opportunities that can lead to better employment. Low graduation rates can also make it difficult for a community to attract businesses with the promise of a well-educated workforce.

Those aspects are apparently weighing heavily on Oregon Gov. Kate Brown, who earlier this week announced the creation of a new position. The “education innovation officer” will focus on boosting the Beaver State’s 72 percent graduation rate, the fourth-lowest in the nation. Among the challenges: Oregon’s epidemic of school absenteeism. (For more on this issue, take a look at the Empty Desks project by The Oregonian’s Betsy Hammond.)

Texas, with an 88 percent high school graduation rate, graduates 52 percent of its students who attend public universities; the national average is 57 percent. In fact, how well a region performs at the high school level can sometimes be at odds with its economic vitality. Washington, D.C., known for chronically low high school graduation rates, has one of the most educated workforces in the nation, in large part because the city attracts so many qualified workers from across the United States.

So, what’s next? The GradNation campaign says it’s critical for districts and states to continue shutting down failing schools and moving students to campuses where they have a better chance to succeed. And that means investing in, and scaling up, research-based programs that have proven track records of helping kids.

“There’s some combination of someone saying ‘We have to change this,’ followed by building capacity and bringing in funding for those solutions,” said Balfanz, director of the university’s Everyone Graduates Center. “It’s not just exaltations to do better. (The states) put people and resources behind it.”