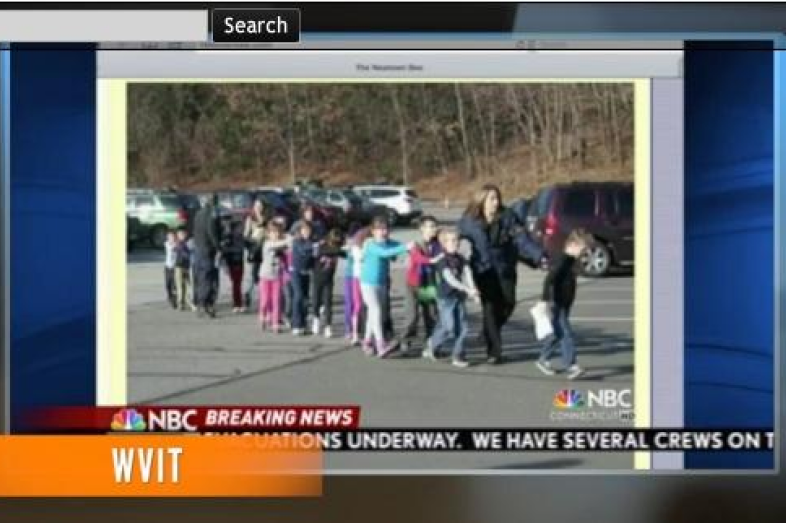 An elementary school shooting in Newtown, Conn. is at the center of a killing spree that led to 28 deaths.

20 children were among the dead. The alleged gunman is said to have killed himself inside the school after the rampage.

The shooter’s name is Adam Lanza. Initial reports indicated the shooter was his brother, 24-year old Ryan Lanza. The older Lanza was earlier considered to be a suspect by various media outlets, but in the evening it was revealed he was taken in for questioning. As of 9:32 p.m. police do not believe Ryan was involved in the shooting.

The shooter was 20 years old, wore a bulletproof vest and was in possession of at least three weapons–including a high powered .223-caliber rifle, the latter weapon discovered in his car after he was found dead at the school. The younger Lanza wore all black during the attack, news channel WABC reports.

Earlier reports indicated Lanza killed his mother, then believed to be a kindergarten teacher at the school, in her classroom. More recently authorities stated she was killed at a home the two shared before school started Friday morning. He then drove in her black Honda to the school, where he brought carnage to two classes and a main office of the school. The weapons used by Lanza were registered legally to his mother, CBS News reports. Authorities say the mother, Nancy Lanza, was likely not a teacher, but a volunteer at the school, according to ABC News.

During the confusion as details of the event trickled out, media reports suggested Lanza killed his father in Hoboken, N.J. and then drove up to Newtown. However, the Stamford Advocate later posted online an interview with the father, a financial services executive at GE, hours after the shooting. According to the paper, he was not informed of the violence until his interview with the paper’s reporter.

Police were notified of an incident in the school at 9:41 a.m., some ten minutes after Lanza opened fire, WNBC reports. Emergency response personnel from across the state responded to the 911 call, including state police and SWAT.

The school, Sandy Hook Elementary,  enrolls roughly 700 students who are in grades kindergarten through four.

In remarks to the nation, a teary-eyed President Obama said, “We’ve endured too many of these tragedies in the past few years.  And each time I learn the news I react not as a President, but as anybody else would — as a parent.  And that was especially true today.  I know there’s not a parent in America who doesn’t feel the same overwhelming grief that I do.”

CBS reports that firefighters escorted many students from class, telling them to cover their eyes and run once they reached the main office of the school building.

Some students hid in a closet to avoid the shooter. WNBC reported that a third grader who was among those hiding told the news outlet he heard Adam Lanza say he will “kill everyone.”

Neighbors of the Lanza household say Adam was at times prone to fits and difficult to manage, according to local news reports. His parents separated nearly a decade ago. Multiple news agencies say he responded poorly to his parents’ marriage ending. His older brother told CBS he had not spoken to Adam since 2010.

Check in for updates from local and national news outlets:

Education Week: “By nearly all accounts, the administrators, teachers, and students at Sandy Hook elementary did everything right Friday—and long before that day—when a young man armed with powerful weapons blasted his way into the school with gunfire.”

ABC News compiled a timeline of the events

USA Today: “A lone gunman killed 26 people at an elementary school here, including his mother and 20 children, in a terrifying early Friday morning shooting spree that rocked this genteel community.

The Associated Press and local media reported the shooter, a 20-year-old male identified as Adam Lanza, was also dead inside Sandy Hook Elementary School. At least three weapons were recovered at the scene, including a .223-caliber assault rifle and two semiautomatic handguns. Lanza’s 24-year-old brother, Ryan, of Hoboken, N.J., was being questioned by authorities.”

Hartford Courant: ”Several news outlets, including The Associated Press and CNN, initially identified the shooter as Ryan Lanza and said his younger brother was being held for questioning as a possible second shooter.

The Associated Press is now reporting that the suspect is Adam Lanza, the younger brother, and that the older brother is being questioned.

CNN is no longer identifying the shooter.”

ABC News: ”First grade teacher Kaitlin Roig, 29, locked her 14 students in a class bathroom and listened to ‘tons of shooting’ until police came to help.

‘It was horrific,’ Roig said. ‘I thought we were going to die.’

She said that the terrified kids were saying, ‘I just want Christmas…I don’t want to die. I just want to have Christmas.’”

Chicago Tribune: ”WCBS-TV and the New York Times report that the shooter’s mother was a teacher at the school and that many of the victims were apparently her students”

ABC News: ”Authorities initially believed that there were two gunmen and were searching cars around the school. It is currently unclear whether there is still a suspect at large.”

WABC: ”A state official confirms that more than 12 people, including children, have been killed in a shooting at Sandy Hook Elementary School in Newtown, Connecticut, Friday morning.

The exact number of deaths is unknown, but the shooter is said to be among the fatalities. Police believe the gunman was a parent of a student who may have had a confrontation with the principal.”

@BrianHughesDC: “I don’t think today is that day,” WH’s Carney says about calls for gun-controldebate.

Politico: ”In the wake of the deadly Connecticut school shooting, Rep. Carolyn McCarthy said she has warned the White House “the gloves are off” if President Obama fails to act on the issue.”

Of the country’s 12 deadliest shooting attacks, six have now occurred since 2007.

Hartford Courant: Multiple people, including children, have been killed in a shooting at Sandy Hook Elementary School.

The number of victims is unclear.

Sources said a person believed to be a shooter is dead. Earlier reports of a second shooter are unconfirmed.

USA Today: Groups of students — some crying, some holding hands — were being escorted away from the school by their teachers. Some students were still in the school at 10:30 a.m., after it was placed on lock down, parents said.

The school is in a residential, wooded neighborhood about 90 minutes north of New York City. It has has 39 teachers and about 650 students. A reverse 911 call went out to parents warning of an incident. Parents were being reunited with children. But, NBC Connecticut reported, police are searching the area behind the school with guns drawn.

Patch: A reverse 911 call went out to all Newtown public school parents, NBC is reporting. Parents are converging all around the school seeking information about their children.

One mother of an 8-year-old girl at the school, Brenda Lebinski, told Patch that her daughter is safe thanks to one teacher’s decision to move all kids into a closet when a gunman had entered the building.

At least some of the shootings occurred in a kindergarten classroom, unclear if that is where dead gunmen was found. #Newtown

#Newtown really is the epitome of an idyllic “that could never happen here” New England community. So shocking to see these images.

The AP: It wasn’t clear how many people were injured at Sandy Hook Elementary School in Newtown. A dispatcher at the Newtown Volunteer Ambulance Corps said a teacher had been shot in the foot and taken to Danbury Hospital.

Sister, driving to Sandy Hook, came upon some 1st graders running from school. She took them to Police Dept. Kids were shaken. Heartbreaking