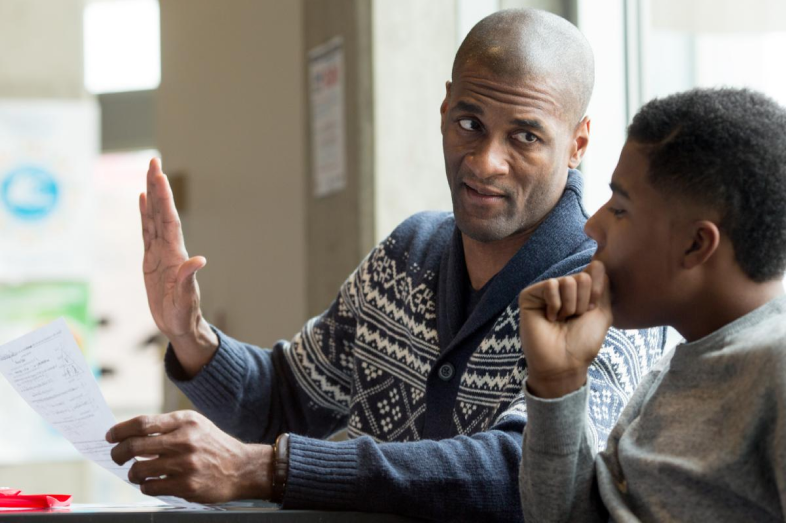 Though students of color now make up the majority of those enrolled in the nation’s public schools, 82 percent of public school teachers are white, according to a 2016 report from the U.S. Department of Education.

Sometimes when Philadelphia school principal Sharif El-Mekki asks a roomful of students of color about their interest in teaching, they respond with laughter.

“We ask them — have you been thinking about it?” he said during a recent EWA panel on how to make the teacher workforce more racially and ethnically diverse. ”And the response,” El-Mekki said, is “No way. I’m having a miserable experience in school. Why would I commit myself to living there?”

El-Mekki and his co-panelists, all current or former educators, agreed: Recruiting the next generation of diverse teachers will require restoring the profession’s reputation among students of color — whose perceptions of teachers are likely shaped by the disproportionately higher rates of discipline and academic underestimation they face in school.

Though students of color now make up the majority of those enrolled in the nation’s public schools, 82 percent of public school teachers are white, according to a 2016 report from the U.S. Department of Education.

“Let’s stop comparing teaching to a battlefield or a war zone,” said panelist Saroja Warner, the director of educator preparation initiatives at the Council of Chief State School Officers. “That is not the metaphor we should be using.”

El-Mekki, the principal of Mastery Charter School-Shoemaker Campus in Philadelphia, and the co-founder of a fellowship program that has the goal of tripling the number of black male educators in Philly by 2025, said one way he gets young audiences to perk up is by telling students they could be the teacher they never had.

But getting student buy-in is just one way to patch what’s often called a “leaky pipeline” into teaching for people of color.

A growing body of research suggests that increasing the racial and ethnic diversity of teachers to better reflect their students can have academic benefits for students of color, including higher graduation rates, higher test scores, and increased referrals to gifted education programs, as experts noted during a separate discussion at EWA’s  2018 National Seminar.

What other efforts are needed to diversity the teacher ranks by race and ethnicity? There are plenty, including holding states and districts accountable for their hiring and recruitment goals, stepping up local recruiting efforts and creating more alternative paths for teacher certification, according to the panelists in Chicago.

Feeling the pressure to diversify their ranks, districts sometimes cast their recruiting nets far beyond their geographical region. But that can be a mistake, panelists said, especially with higher-than-average turnover among teachers of color, who often leave because of unsupportive work environments once they enter the profession. There’s even less incentive to stay if an educator has no roots in the area.

“Think about who we are not reaching and could be reaching,” said Conra Gist, an associate professor of teaching and teacher education at the University of Houston. “Recruit folks who have lived in the community 10 or 15 years and came [through] the same school system.”

A few pieces of research, cited in a study co-authored by Gist, point to some evidence that grow-your-own programs have positive effects on teacher retention.

Sixty percent of participants in the Leap to Teacher Program, run through the City University of New York and Queens College, remained in their positions six years after graduating from the programs, according to a 2011 report from CUNY.

It’s not a perfect solution for every district, though. Warner of CCSSO said that grow-your-own programs, while valuable, have a limited impact in areas that are rural or majority white.

“Do we really want exact parity here?” she said, adding that white students still benefit from having a teacher of color in the classroom.

Alternative teacher preparation programs, like those offered through grow-your-own initiatives or Teach For America, are usually more diverse than traditional pathways (university teaching colleges) because they address cost barriers that keep people of color out of the field, according to the panelists.

They also tend to recruit with more rigor, said El-Mekki. He called this an important characteristic because many men of color in education are “tapped” by others to become teachers — including himself. It doesn’t always happen organically.

El-Mekki said he originally envisioned advocating for social justice through a career in law, but became a teacher in the early 1990s after enrolling in an alternative certification program run through Cheyney University, Philadelphia’s school district, and the nonprofit Concerned Black Men.

For states and local systems to make much progress on this issue, Warner said, two things are essential: accountability and the help of nonprofits, labor unions, fellowships, civic organizations and prep programs.

About 15 states, including New York and Louisiana, have signed on to an initiative launched by CCSSO this year, committing to a significant shift in the racial makeup of their teacher workforces by 2025. Mississippi, for example, pledged to increase the share of teachers of color by 25 percent in districts where there is an existing teacher shortage.

“A lot of places have goals, but they don’t say them out loud,” said El-Mekki, “because they might be held accountable for those results.”