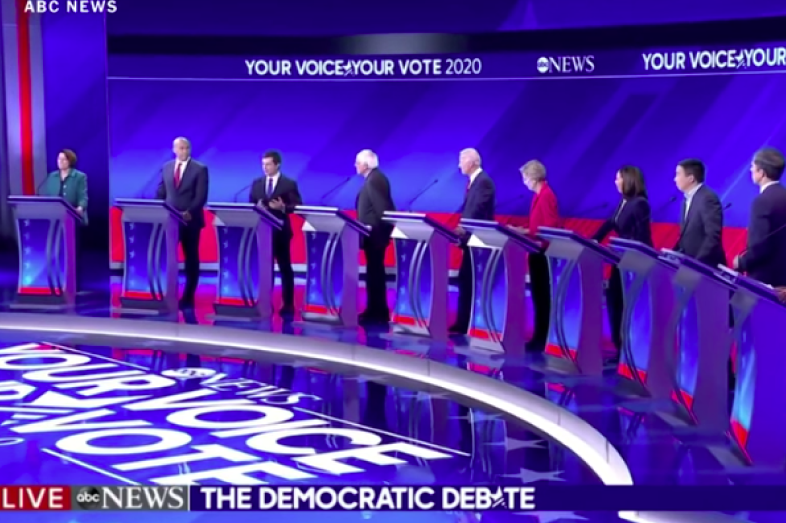 In September 2008, with polls showing him in a statistical dead heat with Republican presidential nominee John McCain, Barack Obama proposed doubling the federal funding for charter schools. As president, Obama was a champion of charters and also used mechanisms such as his Race to the Top education initiative to spark their expansion.

It’s hard to imagine a Democratic candidate for president in the current campaign proposing to double federal aid for charter schools. To understand how the Democratic Party’s politics have shifted for these independently operated public schools of choice, look no further than the battle for the presidential nomination.

Charter schools, which now serve more than 3 million students in 44 states plus the District of Columbia, surfaced several times during the debate earlier this month among Democrats seeking the White House. In fact, the first education-focused question centered on the issue.

Moderator Linsey Davis of ABC News asked entrepreneur and candidate Andrew Yang — who she described as “the most vocal proponent of charter schools” on the debate stage — “Why isn’t taxpayer money better spent on fixing traditional public schools?”

Yang’s answer? “Let me be clear. I’m pro public school.” He proceeded to call for increased teacher pay, a reduced emphasis on standardized tests, and a vague call to “put money into the families and communities.” In effect, Yang avoided offering a defense of charter schools.

Later in the same debate, Julian Castro, a former Secretary of Housing and Urban Development in the Obama administration, said “it is a myth that charter schools are better than public schools. They’re not. And so while I’m not categorically against charter schools, I would require more transparency and accountability from them than is required right now.”

“While some candidates, like Vermont Sen. Bernie Sanders, have been aggressive about criticizing charter schools on the campaign trail, others have been reluctant to comment on them,” she wrote. “The Democratic party’s 2016 platform supported the publicly funded, independently operated schools, but some vocal constituencies have questioned if they are properly held accountable and if they divert money from district-operated schools.”

Meanwhile, the U.S. House, where Democrats hold a majority, approved a spending bill in June that would cut federal charter schools aid by 10 percent, to $400 million. A Senate Republican bill unveiled this month would provide a $20 million increase over the current level, to $460 million, Education Week reports.

“The cumulative setbacks serve to highlight the precarious position in which the charter sector finds itself – one in which it’s being pinched from one side by Secretary of Education Betsy DeVos’ school choice agenda, of which charters are a part, and on the other by the national teachers unions’ aggressive push to restrict them in favor of traditional public education,” she writes.

Camera’s story points to tensions playing out in a variety states and local communities across the country. For more on the shifting political situation at the state level for charters, including in states such as California, Illinois and Michigan, and to learn about how the rules for governing charters vary from state to state, check out this EWA blog post.

At EWA’s 2019 National Seminar in Baltimore, the debate over charters and choice were front and center in a session titled “School Choice: Shifting Policies and Politics.”

Jeffrey Henig, a professor at Teachers College, Columbia University said he sees a challenge in particular for a candidate like Sen. Booker of New Jersey.

“Some of the candidates like Cory Booker have been historically aligned with charters, and that’s going to be something he’s going to have to carry his way through in the Democratic primary,” Henig said. At the same time, he noted: “It might be an asset in the general election.”

That presumably was seen as the situation by the Obama campaign when the candidate rolled out his plan to double charter funding in 2008. (Going further back, 2000 presidential nominee Al Gore proposed to triple charter funding.)

Henig also noted that the origins of the charter sector reflected the coming together of “strange bedfellows,” with some politically progressive, community-based school leaders seeking to decentralize education and more conservative, market-oriented advocates of unfettered school choice. Henig argued that the election of President Trump and the actions of Secretary of Education Betsy DeVos during his tenure have strained that coalition and complicated the politics of school choice.

At the same time, with charter schools now operating in the vast majority of states, “charters are now pretty well ingrained in the education landscape,” he said. “The debate [has] shifted from whether they should be outlawed to how they should be limited and regulated and controlled.”

James Blew, an assistant U.S. secretary of education in the Trump administration, said during the panel that there have long been “factions in the school choice movement.”

“I’ve been living it for the last 20 years, and those factions are real and they’re deep,” he said.

Blew made the case that the Trump administration’s K-12 agenda, including the push for expanding school choice and charters, is aimed at “making sure every child gets a good education in this country. … The status quo has failed for 50 years.”

Meanwhile, American Federation of Teachers president Randi Weingarten, also on the EWA panel, said: “Al Shanker was frankly one of the first proponents of charter schools for the same kind of Leftist progressive reasons as people saw.” (Shanker served as the union’s president from 1974 to 1997.) “We’re now actually organizing [teachers in] a whole bunch of charter schools, and just had four strikes in Chicago.”

Weingarten added: “We organize charters and we have created charters, but the issue for me is: How do we ensure that every public school is a place their parents want to send their kids and educators want to teach and kids want to be at?”

At the same time, Weingarten said of charters: “Let them be accountable, let them have the same kind of transparency rules, accountability rules” as district-run schools.

In its most recent national poll, the journal Education Next found public support for charter schools at 48 percent, up from a low of 39 percent two years earlier.

But while six out of every 10 Republicans were in favor of charters, just four out of 10 Democrats were on the same page. At the request of Chalkbeat reporter Matt Barnum, EdNext broke down the poll results by political affiliation within racial groups.

The results? Among black and Hispanic Democrats, support for charter schools “held steady from 2016 to 2018 [at about 47 percent]. But among white Democrats, approval tanked, dropping from 43 to 27 percent.” Barnum notes that Education Next has tracked public opinion on charters for many years, and that the journal is seen as generally sympathetic to school choice.

Martin West, an education professor at Harvard and Education Next’s editor, told Chalkbeat that the finding “creates a bit of a challenge for Democratic candidates in the presidential primaries. It’s not clear to me that many people will be basing their decisions on education, but voters of color are a substantial segment of the Democratic primary electorate.”

To a large degree the fate of charters rests not with the victor in the 2020 presidential election or Congress, but with state and local policymakers. That doesn’t mean presidential hopefuls can dodge the question. Rather, they’ll have to aim for an answer that satisfies the majority of voters — a task that’s arguably getting tougher all the time.