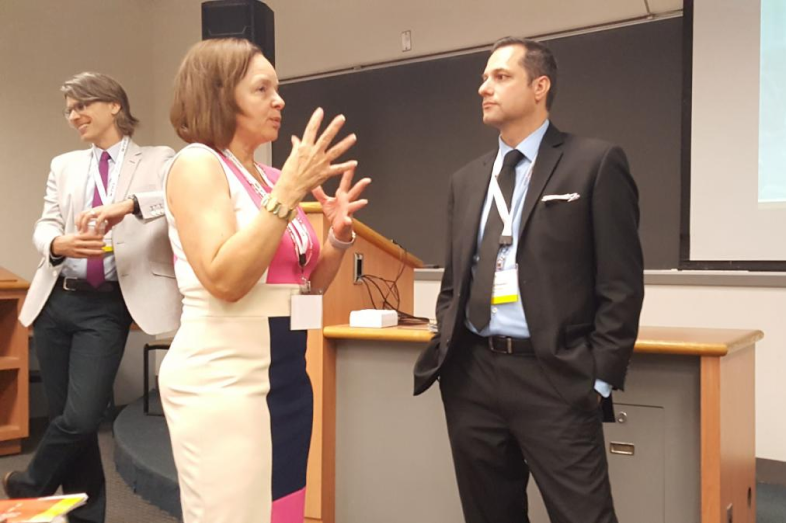 The school improvement spotlight has, in recent years, shone brightly on teachers. Just outside of the spotlight, yet wielding significant influence in schools, are principals.

The school improvement spotlight has, in recent years, shone brightly on teachers. Just outside of the spotlight, yet wielding significant influence in schools, are principals.

“We need to take more seriously that school leadership really matters,” said Jason Grissom, an associate professor of education and public policy at Vanderbilt University who has studied the subject.

But what are the key ingredients of effective principals, and how should they spend their time? Grissom provided an overview of his research findings during a panel discussion titled  “The Power of the Principal” at the Education Writers Association’s 2017 annual conference in Washington, D.C.

One thing that often gets ignored, Grissom suggested, is ensuring principals are trained to do these things well.

Several principals who have been recognized for their strong leadership shared their views on how to create the balances that Grissom’s research supports.

“There are many hats that the principal has to wear, but the most important hat is the instructional [leader],” said Nathaniel Provencio, the principal of Minnieville Elementary School in Woodbridge, Va. Provencio was named 2016-17 Principal of the Year by The Washington Post.

He said good principals can focus on that aspect during the school day by taking care of administrative and managerial responsibilities when students aren’t present. That frees them to work alongside teacher teams and make sure best practices are taking place, such as reviewing lessons and assessments and going over individual student needs.

“We continually do that through the whole year so at the end of the year there’s no surprises,” Provencio said.

Click on the image below to view Jason Grissom’s full presentation on school leadership delivered at EWA’s 2017 National Seminar. 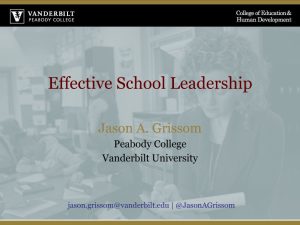 The principal also has to recognize she can’t do all the work alone, said Marcy Leonard, the principal of Hammond High School in Columbia, Md. It’s critical to “build the leadership capacity in everyone else in the building,” from assistant principals on down, Leonard said. A clear mission and goals keep everyone on the same page, she added, with the principal managing the team.

“Everyone has a responsibility,” agreed Anita Berger, the principal of Banneker High School in Washington, D.C. “I position people around me that are smarter than I am. They are my thought partners.”

The effort to develop a strong team with a shared direction takes time, all agreed. Grissom posited that principal turnover is “bad for schools.” But if it has to happen, he said, districts should have a clear strategy for moving leaders.

“It takes three years, five years, six years … before you can say that school is theirs,” he said.

Berger, who was named the 2016 Principal of the Year by the District of Columbia Public Schools, said a principal deserves at least three years to “do your mission.” If they want to leave after one year, she added, “the job is not for them.”

Leonard said it took her nearly six years to figure out how to have the right conversations with her students, parents and community members. It wasn’t always easy, she said, being the “little white woman” dealing with race issues in a predominantly poor, minority community.

But given time, she found ways to create the space for students to meet their goals. It often meant helping them create an agenda that is kid-driven, filled with their voices.

Teachers and staff also need to have opportunities to ask questions and raise concerns, and know the principal is listening and will respond — even if the answer is “no,” Leonard added.

Just don’t go in looking for a Joe Clark, said Provencio, referring to the New Jersey high school principal made famous by the movie “Lean on Me.” Clark “actually was a horrible principal,” he said, who did not pursue sustained improvement over time.

The best principal will create a system that can survive even after he’s gone, Provencio said. “You never know where you’re going to be from year to year.”

For all the latest news on school leadership, be sure to visit EWA’s School Leadership topics page.