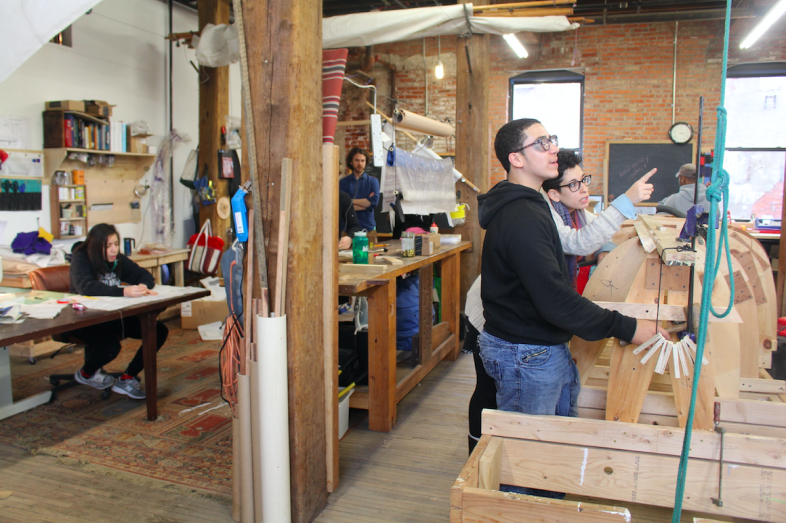 Putting Students in Charge of Their Own Learning

Imagine you’re a student: You walk into school and check an electronic board for your name and where you go for the day. At the assigned station, you and a small group of fellow students work with a teacher on algebra, which builds on the lesson you mastered the day before. Then, you take a short quiz that helps to create your class schedule for the next day.

Or, imagine that your whole self-guided high school experience is centered around a topic or field that you’re passionate about, with internships throughout the year and advisors and mentors who assist you along the path.

These experiences are happening, as educators and experts told an audience at the Education Writers Association’s National Seminar in May.

The first example is from Teach to One: Math, a personalized learning initiative led by the nonprofit New Classrooms. The group partners with district schools and charters to reach 10,000 students in nine states. Teach to One is now focused on middle school, but it’s about to expand into the high school grades.

The second example, of the self-guided high school experience, describes the approach of Big Picture Learning, a national network with more than 65 schools in 18 states.

More innovation would exist were there as much research and development money going toward education as to sectors such as technology and health care, said New Classrooms co-founder Joel Rose, and were there not so much fear and intransigence among educators and families.

In the period between the stagecoach and the rocketship, the U.S. schoolroom model hasn’t changed much, according to panelists at the EWA discussion on “reimagining” high school. Students of the same age typically sit in uncomfortable desks all facing the same direction as the teacher, the “sage on the stage,” lectures. Learning typically happens only between bells.

That model was intended to create a compliant industrial workforce and build cultural cohesion out of the melting pot of the 19th century, said Nick Donohue, the president and CEO of the Nellie Mae Education Foundation.

“The great teachers today are really thwarted by the systems that are in place,” Donohue said during the EWA discussion. (The irony wasn’t lost on audience members that they were seated in hard chairs in rows facing front, listening to lecturers in timed segments.)

Andrew Frishman of Big Picture Learning offered to let people flip through a book he brought, “Boston Public Schools: Their Plight and Future.” It was written in 1982, but the scene it describes still fits the Boston schools 34 years later, Frishman said.

He asked the audience to think of the most significant learning experiences they had between ages 13 and 17. Frishman said his was working at a daycare center in a low-income neighborhood near his hometown. Most people cite some experience outside of their regular school experience, he said. That’s why Big Picture Learning focuses so much on internships and promoting students’ passion projects.

Diane Tavenner, the co-founder and CEO of the West Coast charter management organization Summit Public Schools, called the traditional bell schedule “the tail that wags the dog.” Innovating on top of that old infrastructure is like “moving the furniture around and putting up some new curtains instead of fixing the plumbing.”

The goal for 21st-century youths, the speakers said, should be deeper learning that is student-centered. Rebecca Wolfe, the director of the Students at the Center initiative for the nonprofit, Jobs for the Future, gave a comprehensive description of what that means:

Monica Martinez, the managing partner of ConsultED Strategists and co-author of the book “Deeper Learning,” said the best start to redesigning a school environment is for the principal to be able to describe in broad terms what he or she wants students to be able to do, and then to ask how to achieve that.

She also said the role of the teacher must evolve, from controlling and lecturing to more facilitating and coaching behind the scenes.

When asked which students are experiencing this educational approach, Donohue said it tends to those in higher-end schools, whose districts have the financial “slack to rethink” the way they do school. On the other end, it’s also the kids who need serious remedial help. Reform is not happening much in the middle, he said.

Martinez said she’s seen some of the strongest resistance to change from the wealthiest districts and parents, who believe their kids are doing just fine.

So, how can reporters tell whether a shiny new education model is worthwhile? Are there metrics or benchmarks to look for? Not really — or at least not yet — was the general answer from panelists. Suggestions ranged from reading peer-reviewed studies to directly asking high schoolers what they think.

“That’s going to take a lot of hand-holding,” Rubin said. But “when it’s rockin’, it’s amazing.”