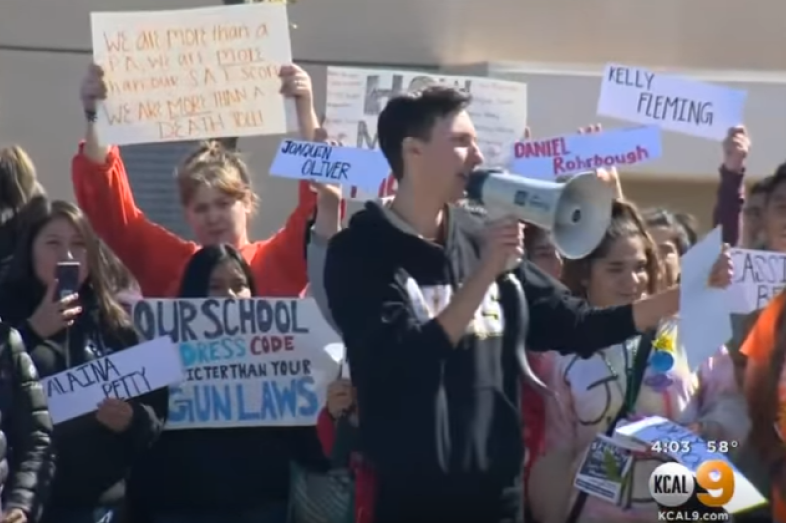 Questions to Ask as Schools Weigh Response to Student Walkouts

In the wake of one of the deadliest school shootings in U.S. history, a groundswell of student activism has jolted the gun control debate and left some school districts coping with the surge of civic engagement.

For education journalists, the developments present an opportunity to examine how local schools and districts are responding to and preparing for student demonstrations and walkouts. Are they encouraging students? Threatening to suspend them? Struggling to come up with a clear strategy?

The shootings at Marjory Stoneman Douglas High School in Parkland, Florida this month left 17 dead and 15 injured. Since then, students from the high school have taken the lead in advocating for tougher gun laws—holding rallies, speaking regularly on national television, and descending on the Florida state capitol to lobby lawmakers.

The Parkland students’ activism has captured national attention and, with the help of social media, sparked student-led protests across the country. With nationwide school walkouts planned for March 14 and April 20, school districts can expect more to come.

Education reporters looking to cover these developments should keep in mind a range of questions to ask local school leaders.

For example, how will local districts respond if students participate in a walkout? Have districts in their coverage areas made any statements about possible consequences for students who protest? Are there existing school or district policies that apply?

As U.S. News & World Report and others have reported, districts have so far varied widely in their responses—from threats of punishment for students who walk out of school to supporting students’ activism and engagement.

The superintendent of the Needville Independent School District in Texas warned last week that students who participate in a walkout will be suspended for three days. Meanwhile, The Washington Post reports that some schools in the D.C. region are opting not to punish students who walk out and, instead, are trying to turn the student’s energy and activism into a teaching opportunity.

“We allowed it to happen,” Linda Erdos, a spokeswoman for Arlington Public Schools, told The Washington Post. “It’s a sad thing that the kids are grappling with, and we want to be as supportive as possible. Students need to be able to express their feelings, too.”

How are schools and districts in your coverage area responding?

If school officials are threatening to discipline students who walk out, are they finding other ways to encourage student input and engagement on controversial issues such as gun control, school safety, and mental health? Or, out of fear of taking sides, are they ignoring the issue altogether?

Journalists can review existing district policies to see which are applicable here. For example, are school leaders given any discretion in differentiating between “excused” and “unexcused” absences?

As Education Week reports, student activism on gun control has not been limited to Florida or to traditionally “blue” states. The surge of energy is reaching schools across political and geographic divides.

Education journalists should go straight to the students in their communities to learn more about their involvement, or lack of involvement, in this rising movement.

Are students talking about school safety and gun control in their classes or among their friends? If students are organizing, what tools are they using?

Are they receiving guidance or support from any outside groups? How are they responding to warnings of disciplinary consequences for their actions?

Establishing sources among students and their parents now will prove useful to journalists in the days and weeks ahead if the protests continue to gain steam.

Questions for Colleges and Universities

The activism sparked by the Florida school shooting also has implications beyond the K-12 realm, reaching beyond middle and high school classrooms and into the admissions offices of colleges and universities.

Facing the potential of serious disciplinary action in response to protests, some students are asking how colleges will react when it comes time to apply. As Inside Higher Ed reports, some colleges are responding with reassurances that such disciplinary action will not be held against applicants.

What are colleges and universities in your area saying? Are students required to report suspensions when they apply? How will a suspension resulting from a walkout impact applicants’ admissions prospects?

Journalists should also brush up on students’ legal rights to engage in protests at school.

The U.S. Supreme Court’s 1969 landmark decision in Tinker v. Des Moines Independent Community School District famously stated that students do not shed their constitutional rights – such as freedom of speech and freedom of assembly – “at the schoolhouse gate.”

Still, as Vera Eidelman of the American Civil Liberties Union explains, schools are well within their legal limits to discipline students for missing class.

Journalists with more questions about students’ rights may want to contact their local chapter of the ACLU or other organizations with legal expertise for more information.

Of course, the growing chorus of student voices in the gun control debate is just one of many issues education journalists should explore. For more, check out the latest blog from EWA’s public editor, Emily Richmond.