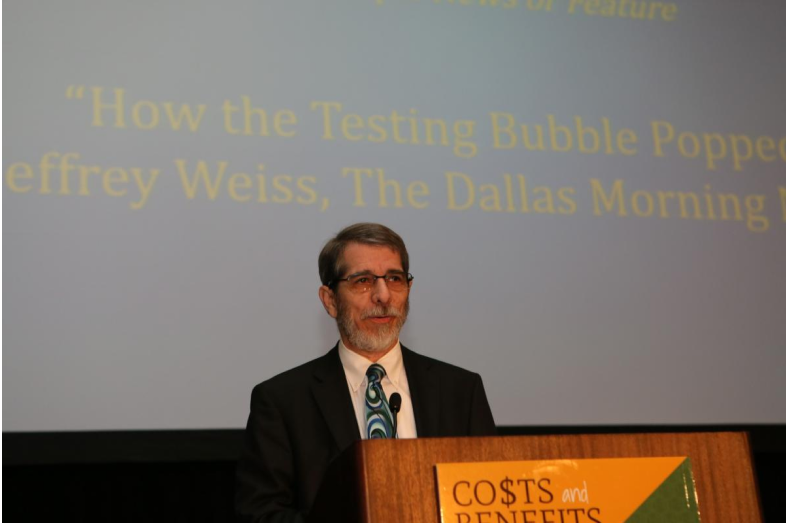 Remembering Jeffrey Weiss: A Journalist Who Put His Readers First

At the Dallas Morning News, where longtime journalist and EWA member Jeffrey Weiss spent the bulk of his remarkable career, he was known as the guy who always asked, “So what?” He was always probing, asking tough questions, trying to figure out the heart of the story, colleagues recalled.

Weiss, 62, died Oct. 25 of brain cancer, a disease he fought publicly as he shared his health battles in a series of searingly frank columns for the newspaper.

In 2014, Weiss won a first prize in EWA’s National Awards for Education Reporting for a series on Texas parents pushing back against standardized testing. In a front-page tribute, Dallas Morning News editor Mike Wilson reflected on Weiss and his contributions to the newspaper:

“Jeff was a perpetual student who brought a sense of wonder to every story he covered, including the story of his own terminal illness. People will say he was brave, and he was, but more than anything he was curious. His fascination with just about everything was his greatest gift to his readers and to us. He was a good reporter and a good man and we’ll miss him terribly.”

Prior to joining the Dallas newspaper, Weiss worked at The Miami Herald. In addition to his education-related reporting, Weiss also wrote about religion and covered the energy beat for the Dallas newspaper. His friends and colleagues flooded social media following the announcement of his passing, recalling his good nature, wit, and talent for posing probing questions:

He was himself through and through. Let’s all get a little quirkier, in honor of @Jeffreyweissdmn. https://t.co/ot9J5nPcKr pic.twitter.com/C2eXnI2Ou5

Eva-Marie Ayala, an education reporter at The Dallas Morning News, described Weiss as “a die-hard education nerd” with a playful side. He often matched his neckties to his work assignments, choosing ones with ABCs or pencils for the days he visited schools.

“He was an amazing mentor to everyone who met him,” Ayala told EWA. “He lit that urgent fire in so many of us to always keep digging and to tell our stories in the most clear and entertaining way we could.”

In a column published in July, Weiss said he became a journalist because he saw it as a helping profession — a way to improve the world. He hoped to “go out like Johnny Appleseed.” Weiss saw himself as having means of “scattering” his legacy: the trove of news stories he had written, and any support and insights he could pass on to his newsroom colleagues that might inform their own work moving forward:

I call the top priority the “so what?” graph. Why should a reader care about the story? In the digital world, basic facts often flow like a river, with streams from many sources. But what’s the context? If a reader clicks into a story on their smartphone and can’t figure out why to care in about 20 seconds, they are gone and may never come back. What’s your “so what?” is the seed I plant with every conversation.

Tawnell Hobbs, who covered the schools beat for the Dallas newspaper from 2000 until last year, said “the times he dipped into Dallas schools coverage to help Matthew Haag and I were the best and will never be forgotten. Jeff was a master of explanatory journalism and could break down the most complicated issue for the youngest reader to understand.”

Hobbs, now a national education reporter for The Wall Street Journal, said Weiss was always encouraging his colleagues to push themselves in their reporting, especially with his signature question: “His ‘so what?’ to a story idea could easily send you in another direction or make you dig a bit deeper,” she said.

Weiss is survived by his wife Marni, brother Dale and sister-in-law Alison, his 93-year-old mother, a niece and a nephew. A memorial service is being planned.