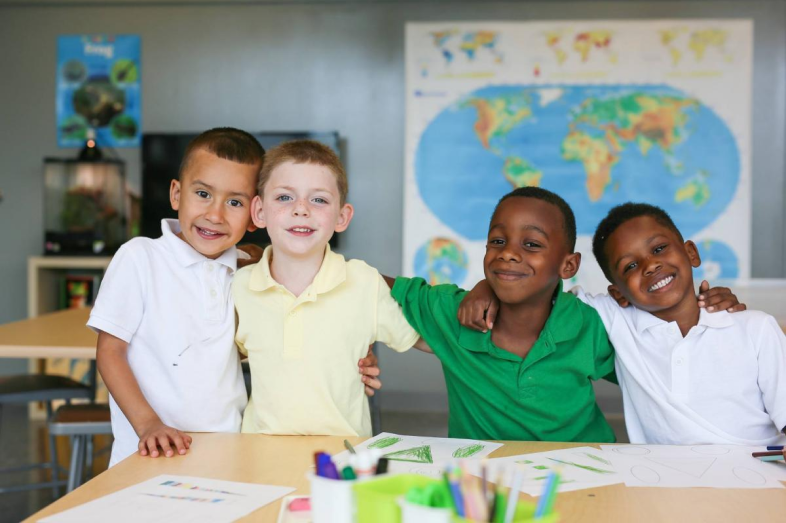 Kriste Dragon grew up in Atlanta, a mixed-race child in a segregated school system.

When it came time to find a school for her children in her new Hollywood home, Dragon was hopeful that the neighborhood’s highly diverse demographics would be reflected in its schools. But instead, she found a low-performing school system that was as segregated — or worse — as what she’d experienced growing up.

So Dragon, equipped with experience as a classroom teacher and as the executive director of Teach For America Los Angeles, set out to create her own school.

Now the CEO and co-founder of the “intentionally racially and socioeconomically diverse” Citizens of the World Charter Schools network, Dragon shared her story with reporters at a recent Education Writers Association seminar in Los Angeles. She joined a discussion on segregation and whether charter schools perpetuate the problem, as some critics have claimed.

One of those critics is Gary Orfield, the co-director of the Civil Rights Project/ Proyectos Derechos Civiles at UCLA, who joined Dragon on a panel along with Chris Stewart of the Chicago-based nonprofit Education Post.

In a 2016 Civil Rights Project research brief, “Brown at 62: School Segregation by Race, Poverty and State,” Orfield and his co-authors wrote that it has been a long time since the challenge of school segregation has been met with viable approaches to integrate schools by race, ethnicity, and income levels.

“Instead, we have spent decades trying another approach: policies that have focused on attempting to equalize schools and opportunity through accountability and high-stakes testing policies, not to mention the federal subsidization of entirely new systems of school choice, like charter schools, without any civil rights provisions. These policies have not succeeded in reducing racial segregation or inequality.”

The project’s last national look at charter schools, in 2010, found that racial and ethnic isolation of minorities is far more common in charter schools than traditional public schools. Seventy percent of black students enrolled in charters attended schools deemed “intensely segregated.” (The report defines such segregation as occurring when at least 90 percent of students were minorities.) This level of segregation was twice as high as in traditional public schools, the report said. The same analysis also found that half of Latino charter school students attended “intensely segregated” schools. (Critics say the national data in the report are misleading, since so many charters serve inner-city neighborhoods.)

“I don’t think the effect of segregation is very much different between these two systems,” Orfield said of charters and traditional public school districts. “The problem is, these are new schools. We’re creating new segregated schools….In most of them, nobody’s doing anything to make them diverse.”

But is racial isolation necessarily a bad thing?

Stewart, who also is a regular contributor to the Citizen Ed blog, described a “homegrown” charter system in his home state of Minnesota that’s divided by choice, where the No. 1 priority is educating students and meeting their needs in ways the school district has not.

“We have Somali schools, we have Hmong schools, we have schools for Native American kids,” Stewart said. “And those communities don’t really see their schools as segregated or as isolated, they see them as kind of culturally affirming environments for kids that they can’t get in a very white state like Minnesota.”

Stewart later added, “When the government assigns you by race to inferior schools, that is traditionally what we have considered to be segregation. When parents pick a culturally affirming program for their child, and they are from a historically marginalized population like Indians or black people — I happen to be a black Indian — that is so far from the traditional understanding of segregation that it’s almost insulting to call it that.”

But while Orfield sees nothing wrong with a school of choice emphasizing and celebrating a culture, he said charter schools should not be designed to limit entry to students who are not of that race and culture.

“They have a right to have schools of their own on their reservation, on tribal lands,” he said of Native Americans. “They don’t have a right to have a school for just one race using public funds and public spaces. That’s against our Constitution. That’s what the (Brown v. Board) decision is about.”

For her part, Dragon said “integration in and of itself will not solve anything,” and described integrated schools that look diverse on paper but operate on two separate tracks based on students’ race — one college-bound and the other not.

While her charter network is committed to matching the demographics of the neighborhoods that surround its schools, that’s not the same thing as integration, she said. Families who send their children to Citizens of the World charter schools are pursuing a diverse learning environment, and their buy-in makes a difference.

“There are a lot of things that need to be considered … because even with a genuine desire to bring families together, we’re still living in a country that has real income disparity and a long — I would say dark — history around race and race relations,” Dragon said. “Both of those things will be present in these integrated schools.”

Ultimately, Stewart said, “durable, enduring white privilege” is at the root of segregation, and he sees “no basis” for claims that charters drive or aggravate segregation in schools.