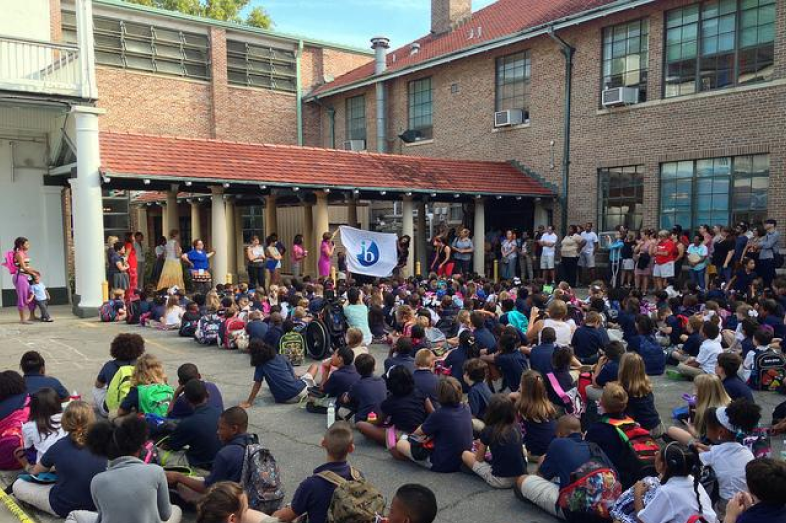 Schools that that teach low-income students a notoriously demanding curriculum are almost twice as likely to see those students enroll in college, a new report shows.

This news comes on the heels of growing research suggesting that challenging assessments, which are a staple of the International Baccalaureate program featured in the report, help students develop a deeper understanding of key subjects like math and history. That “deeper learning,” in turn, may lead to more college opportunities.

The International Baccalaureate, a nonprofit organization that sells its stable of intensive coursework for various subjects to schools around the world, released the study last week, calculating that more than half of the 1,650 schools in the United States that use IB material fit the federal designation of Title I schools, which means they enroll a large low-income student population. In fact, the number of Title I schools offering IB programming increased by 50 percent between 2009 and 2013, the report said.

The IB program provides curricula tailored for specific grade levels, including the IB “diploma program” for high school students. The IB study tracked how many of its low-income diploma program students attending Title I schools enrolled in college, finding that in 2013 nearly eight in 10 went on to a postsecondary institution. The national college-going average for low-income students is 46 percent, the report notes. According to the IB, about a third of the diploma program test-takers were considered low-income students. To become an International Baccalaureate school, campuses must go through the program’s authorization program.

Black and Hispanic students, who made up about a third of the diploma program students taking the tough assessments at Title I schools, attended colleges at far higher rates than the national average, as the chart below shows.

The IB program is one of several academic initiatives that stress the use of project-based assessments so that students can showcase their ability to analyze and apply complex information. It’s the kind of college-level work that is common in countries that traditionally outscore the United States on international math and reading assessments. While the IB and Advanced Placement programs are the best known, other tough assessment efforts include Innovation Lab Network (ILN) and the New York Performance Standards consortium.

As I wrote earlier, assessments like those from the IB are considered to be far more challenging than traditional big-stakes tests students take. A recent RAND Corp. study of 17 state standardized tests found that 2 percent of the math questions and 21 percent of the English Language Arts questions assessed students on higher-order skills, while the IB and AP exams featured far tougher questions and assignments.

Scholars of testing and college readiness see potential in assessments like the IB, provided that schools don’t issue too many additional tests to students, which may have the effect of slowing down the pace of the classroom and costing schools more money, they say.

A recent study on the effect deeper learning has on college attendance found that schools where students are tasked with involved projects and long-term assignments enrolled in more selective, four-year colleges than similar students who didn’t attend such high schools. The American Institutes for Research examined 30 high schools.