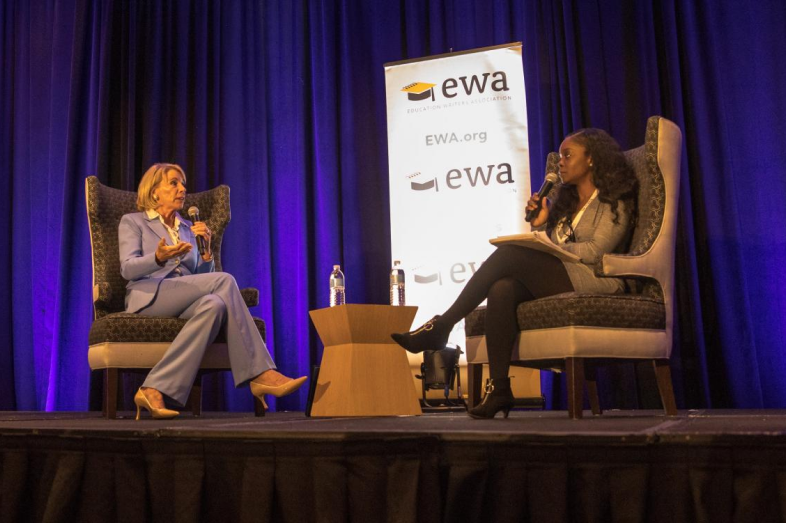 U.S. Secretary of Education Betsy DeVos defended her education agenda in front of hundreds of education reporters on Monday, as she discussed efforts to expand school choice and the reversal of policies and guidance set forth by the Obama administration on student discipline, special education, and student loan forgiveness.

“The simple truth is: I never imagined I’d be a focus of your coverage,” she said in opening remarks at the Education Writers Association’s annual conference in Baltimore, where she was interviewed by Erica Green, an education reporter at The New York Times and an EWA board member. DeVos also fielded questions from the audience.

“I don’t enjoy the publicity that comes with my position,” she said. “I don’t love being up on stage or on any kind of platform. I’m an introvert.”

The appearance was the first by Secretary DeVos at an EWA seminar. She declined invitations to speak at EWA’s National Seminar in 2017 and 2018.

“As much as many in the media use my name as clickbait or try to make it all about me, it’s not,” she said. “Education is not about Betsy DeVos nor any other individual. It’s about students. It’s about acknowledging the innate value of every single one of them.”

“It’s one that deserves accurate reporting and fair analysis,” she said. “So, first of all, in too many stories about our proposal, I see the term ‘public money.’”

Allowable uses for the scholarships would include private school tuition and many other education-related expenses, such as private tutoring, dual-enrollment programs, apprenticeships, or even transportation to an education provider outside the family’s zoned public school.

As proposed, individual donors would be able to contribute up to 10 percent of their adjusted gross income to a scholarship-granting organization approved by a state, and businesses could contribute up to 5 percent of their net taxable income. Each participating state would determine how to structure its program, including eligible students, education providers, and education expenses.

Advocates of traditional public schools, including the two national teachers’ unions, have sharply criticized the measure, arguing that it would siphon money out of public schools.

In discussing her plans for choice, DeVos urged reporters to be careful in the language they use to describe different approaches.

“Let’s get the terminology right about schools and school choice,” she said. “Vouchers are not tax credits, nor are they tax deductions nor education savings accounts nor 529 accounts. There are many different mechanisms that empower families to choose the education that’s right for their children.”

The new proposal from Secretary DeVos faces a steep uphill battle in Congress, where Democrats now control the U.S. House of Representatives. In the Republican-led Senate, it’s also likely to be tough going, as moderate-leaning Republicans, including Sen. Susan Collins of Maine and Sen. Lisa Murkowski of Alaska, have been wary of school choice policies that originate at the federal level.

“I am reaching out to Democrats, as are the sponsors in both chambers,” DeVos said. “We know bringing support on board for this initiative will take time. We didn’t get where we are overnight and we know that change for many people is hard.”

The secretary fielded questions from reporters on a variety of issues, including school choice and charters. For example, Craig Harris, an investigative reporter, highlighted troubling practices by some charter school founders and operators in Arizona brought to light through reporting by Harris and his colleagues at the Arizona Republic.

“Charter schools are very important to you and the president, but how do you feel about operators involved in self dealing and making a lot of personal profits on taxpayer funds?” Harris asked.

“Every state develops their own programs for governing charter schools and how charter schools can operate,” she said. “And every state will deal with those who run afoul of those laws, and I applaud them when they do.”

Another journalist asked about recent research showing that Louisiana’s publicly funded scholarship program has resulted in students who use a voucher to attend private school performing worse in math.

With regard to Louisiana, DeVos argued that the design of the voucher program “was not very well conceived,” and has discouraged many private schools from participating. She also cited other school choice research, including from Florida, that she said shows student achievement increases for students who choose a school other than their neighborhood schools and for those who remain in their neighborhood schools.

‘I’m Committed to Following the Law’

Given that DeVos has gained little traction on her school choice agenda so far in Congress (including two years under Republican control of both chambers), the education secretary has spent most of her tenure repealing many of the previous administration’s regulations and guidance, including, among other things, policies that propose how schools can expand diversity, protections for transgender students and rules designed to address racial disparities in discipline and identification of students for special education — all of which reporters asked her about.

“I’m committed to following the law,” said DeVos, who blamed the Obama administration for overstepping its authority. “I’m a rule follower. I do that regularly. I’m not going to overstep and make law where there isn’t law.”

“The previous administration had overreached and gone past what the Supreme Court opined on,” she said, specifically defending her decision to repeal guidance aimed at making schools more diverse. She added that she is “personally very supportive” of environments that are diverse, whether they be schools or workplaces.

However, at least two federal judges have found that the U.S. Department of Education under her leadership illegally delayed the enforcement of federal rules, such as on special education and student loan forgiveness.

DeVos attempted to separate the issue of her decision to repeal Obama-era school discipline guidance from the Parkland school shooting in February 2018, noting the guidance was already on the chopping block and was just one of several safety and climate issues the federal school safety commission considered.

The guidance, which prodded schools to use methods of discipline other than suspension and expulsion to keep more kids in the classroom, has become a clarion call for civil rights advocates who see it as essential to address the disproportionate rate at which black students are disciplined. But others see the guidance as a federal overreach that pressures teachers and principals not to report disruptive students to the detriment of others.

“Those who were opposed said it was viewed very much as a mandate that was hamstringing them and in many ways was making their schools less safe,” she said of speaking with teachers who opposed the guidance.

The issue of undocumented students, refugees and those protected by DACA made a brief appearance when a reporter asked DeVos how her views on immigration may differ from President Trump, and also whether she supports a private school scholarship measure in Tennessee, signed by Republican Gov. Bill Lee last week, that may restrict access to those undocumented students.

“I think our president is right,” DeVos said. “We have a crisis.”

She sidestepped a question about whether her views on immigration align with or differ from the president’s perspective.

“This is a matter for Congress to deal with and not continue to ignore it,” she said.

On higher education, the secretary pushed back on media coverage of for-profit colleges, saying that in the wake of the college admissions scandal, more attention should be paid to how elite institutions operate.

“There has been a lot of writing and criticism on schools that are organized as for-profit entities and yet very little has been really investigated and opined upon with regard to schools that are more elite in their student population,” she said. “You cannot look at higher education institutions and act as though they’re all serving students the same way.”

The comments come despite widespread media coverage of the “Varsity Blues” scandal, in which wealthy parents sought special admissions for their children who were applying to elite colleges.

DeVos also put the blame on the previous administration’s “creative lawyering” that established new rules for how borrowers can get their student loans discharged if they’ve been defrauded.

“Between 1995 and 2016 there were fewer than 100 borrower-defense cases brought to the department,” she said. “When I arrived in my job, there were tens of thousands of borrower defense claims that there were no framework for considering how to consider them.”

Rumors have long swirled about whether DeVos will stay on at the department, despite her repeatedly saying she intends to serve the entirety of the president’s first term. Indeed, she is one of just a handful of original Cabinet members and high-ranking officials.

When asked whether she would sign on for another four years if President Trump is re-elected, DeVos laughed and said, “I’m not sure my husband would be OK with that.”