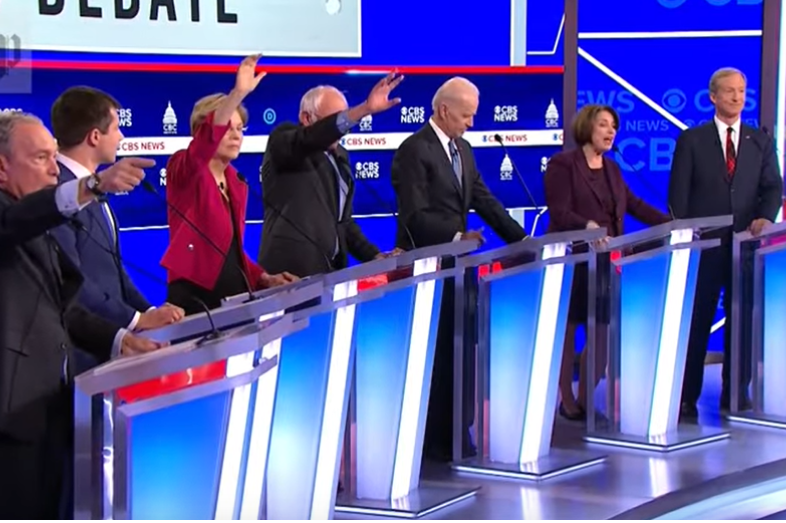 What’s at stake for public education in the 2020 election?

A flurry of education-related conversation surfaced at the most recent Democratic presidential debate on Feb. 25, as candidates exchanged jabs and defended their positions on charter schools, student loan debt, and setting up young people for meaningful careers.

The 10th debate came at a pivotal moment, just days before voters in 14 states will cast their ballots on Super Tuesday (March 3). With education taking a back seat in prior debates, the rapid-fire discussion caught the attention of education journalists and pundits.

Historically black colleges and universities got a shoutout from Sen. Bernie Sanders of Vermont, for example, and former New York City Mayor Michael Bloomberg seemed to tone down his once full-throated support for charter schools as an educational model. Pete Buttigieg, former mayor of South Bend, Indiana, decried that young children are partipating in active shooter drills at school “before they’re old enough to read.”

Former Vice President Joe Biden said community college should be free to any adult looking to boost their workforce skills, while Sanders went a step further and said all public colleges and universities should be tuition-free.

The Democratic primary season offers ample opportunities for education journalists to unpack policy proposals by presidential candidates and those plans’ potential impact. It also invites stories on issues such as the youth vote and even how education-focused influence groups like teachers’ unions in states and communities are weighing in. A look at education’s role in the politically consequential 2020 census may be warranted during the election season as well.

The debate exchange on Feb. 25 gave longtime education journalists a chance to showcase their prior work on these and other issues — and provide important context on some of the candidates’ big ideas.

As front-runner Sanders defended a comment expressing admiration for Cuba’s efforts to improve literacy instruction, Education Week bloggers quickly shared reporting from the news organization’s 2004 visit to the island nation. Longtime education reporter Eliza Shapiro, now with The New York Times, suggested via Twitter that Bloomberg’s claim that New York City’s teachers would speak favorably of his three terms as mayor might have been an overstatement. Chalkbeat founder Elizabeth Green shared her perspective on the same topic here.

In total, 40% of the U.S. population live in states where primary voters will cast ballots on March 3, including the delegate-rich states of California and Texas. For candidates, Super Tuesday represents a litmus test of their potential popularity with the rest of the country, as well as with highly courted demographic groups including African Americans, Latinos, and women.

Another key constituency is unions, including those representing classroom teachers. The American Federation of Teachers, the nation’s second-largest teachers’ union, recently announced it was encouraging members to vote for one of three candidates: Biden, Sanders, or Massachusetts Sen. Elizabeth Warren.

In Nevada, the Clark County Education Association, representing 18,000 teachers in the nation’s fifth-largest school system, endorsed Sanders, who handily won the state’s Feb. 22 caucuses. He’s also been endorsed by the teachers’ unions in Oakland, Los Angeles, and Richmond, California, as well as Washington, D.C. Warren, who has struggled for a foothold in the early caucus and primary states, has also garnered endorsements from teachers’ unions, including the Massachusetts’ AFT affiliate and the local union for Boston Public Schools.

The youth vote has been a factor in deciding the winner of early contests, especially for Sanders. One in six voters in the Nevada caucuses was 18 to 24 years old, according to the Center for Information and Research on Civic Learning and Engagement (CIRCLE) at Tufts University. Of those young voters, two-thirds backed Sanders. The self-described democratic socialist from Vermont also won the support of half of the youth vote in the New Hampshire primary.

Yet for the youth vote to have a decisive impact on the election may require massive turnout. According to CIRCLE, the number of youth voters (ages 18-29) increased in every state and hit a record high of 28% nationally in 2018. And 23% of youths ages 18 and 19 voted in 2018, according to CIRCLE’s analysis. Voter turnout overall was also at a record high that year for a midterm election, at 53%.

Activists are hoping younger voters will again break records this November, which could in turn shift the national narrative on issues like climate change and gun control.

This is where schools can factor into the equation, as they are charged with helping students develop into engaged and informed voters. For civics teachers and political science professors, presidential election years offer a wealth of teachable moments. But as Aliyya Swaby reported for The Texas Tribune, educators are struggling with “information overload,” as “students often learned details about election scandals on social media before they even got to school.”

During the Feb. 19 debate among Democratic candidates for president, Warren accused her competitors of having only superficial proposals for complex problems like health care. By contrast, she points to the detailed plans of action on her campaign website, including a pledge to, if elected, cancel student loan debt on the first day of her presidency. Warren and Minnesota Sen. Amy Klobuchar have this in common on education: Both have vowed to fire U.S. Secretary of Education Betsy DeVos — largely a symbolic pledge in light of the unlikely possibility that DeVos would want to stay should the White House change occupants.

Biden has both K-12 and higher education plans on his website. He wants to make sure teachers earn competitive wages and benefits, and calls for free community college to anyone looking to improve their workforce skills.

Sanders has outlined his “Thurgood Marshall Plan,” referring to the Supreme Court chief justice who presided over the landmark Brown v. Board of Education decision on school segregation in 1954. Among the promises: a starting salary of $60,000 for every teacher, ending for-profit charter schools, and strengthening programs and protections for students with disabilities. Public colleges and universities should also be tuition-free, according to Sanders.

As Matt Barnum reported for Chalkbeat, parent groups pushing for more charter schools scored audiences with both Biden and Warren in South Carolina earlier this week.

While presidents can certainly help shape the federal education agenda, they need cooperation from Congress to decide the big-ticket allocations and policy shifts. And school districts rely primarily on local and state funds to operate, with federal money accounting, on average, for about 8% of the dollars. That’s why the track record of Bloomberg, a latecomer to the presidential race, is particularly informative.

Bloomberg has a lengthy — and often controversial — history of education policy decisions that had a direct effect on the more than 1 million students and 75,000 teachers in New York City, the nation’s largest school district. And earlier this week, calling the spotty and pricey access to early childhood education and child care in the U.S. “an international embarrassment,” Sanders offered a proposal for universal and free prekindergarten. It’s not clear how he plans to address the workforce issues involved in such a large-scale initiative.

It’s worth noting that in addition to helping students prepare to be engaged and informed citizens, schools are also focused this year on another crucial element of the democratic process — the 2020 census. The federal headcount will shape everything from congressional district boundaries to funding for public schools and social services.

Statistics in Schools, a federal program, provides teachers with classroom materials, and will hold a week of “Everyone Counts!” activities for public schools March 2-6. Education advocates say an undercount of young children in 2010 meant less money for key programs, and that schools can help spread the message to adults that participating in the census can help their families and communities.

“The most important thing I want to remind everyone,” U.S. Census Bureau Director Steven Dillingham told a group of third- and fourth-graders at an event in Cleveland last week, “is that everyone needs to be counted, especially children. … Tell your parents you need to be counted.”

For more on the 2020 elections, including key state races and ballot measures, check out EWA’s Topics Page.