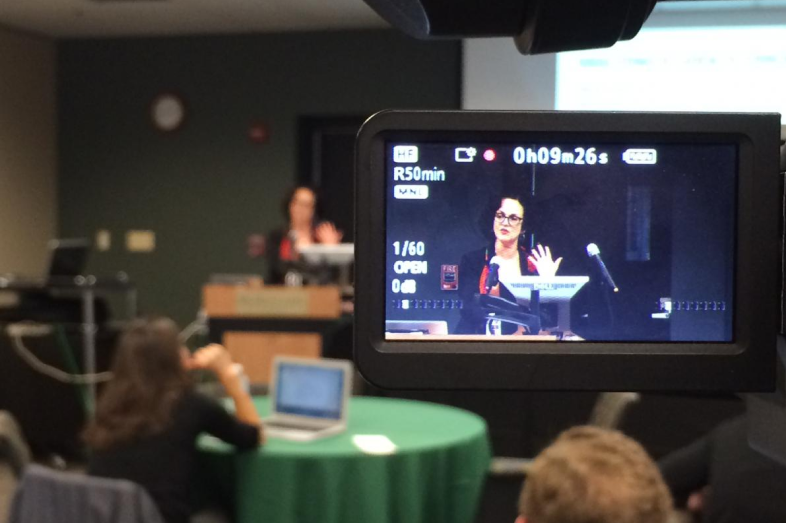 Deborah Loewenberg Ball began her career as an elementary school teacher, working for 15 years with a diverse population of students. But math stumped her.

“That troubled me,” Ball said Oct. 21 during her keynote presentation at the EWA seminar on teaching held in Detroit. “I would work really hard on how could I make the math make sense to the students, … but on Fridays they would know how to do things and on Monday they would have forgotten.”

Ball said she realized “something’s not right about this.”

That block caused her to question her own skills: “Did I, myself, know enough math to be teaching what I was doing?”

Ball, now the dean of the University of Michigan School of Education, is using the insights she gleaned as an elementary teacher to improve the overall teaching profession, and tackle what sees as its major problem: “We have no common standard of performance for the individual person before they become licensed to teach.” (Elizabeth Green’s new book, “Building A Better Teacher” documents Ball’s story in great detail.) She’s trying to create a new bar for entry to the field.

After Ball recognized the gap in her own education, she set out to improve her math teaching. She tried to learn more math content, because she “thought that was part of the root issue.” Ball determined the core issue was “teachers knowing enough subject matter, and very different from what most teachers think the problem is.” In other words, teachers don’t only need to know math. They need to understand the underlying concepts of math so deeply that they can identify the steps students are missing just from looking at their erroneous solutions.

For example, teachers must be able to immediately understand what went wrong in students’ methodologies when they came up with the following solutions to these multiplications problems:

Getting teachers to understand these errors, Ball said, is something that can be taught. Raising teacher quality is “the number one policy imperative of our time,” she said, “given that the 74 million children now growing up in the United States will be the adults and leaders of the next generation. “They are the future America,” she said. “Not educating them comes at a peril to not only their individual rights but also … to society.”

The stakes are tremendous, according to Ball: The United States spends more per pupil than any other industrialized country in the 34-member Organization for Economic Cooperation and Development, but it’s not the highest performer. Research shows that “skillful teaching actually has a positive effect on kids’ life chances,” she said, and that even in extremely challenging school settings, “two different teachers can produce wildly different results in the same environment.”

But despite teaching’s being incredibly complex work, Ball said, “there’s an overwhelming lack of public respect” for the profession.

Teaching faces several problems, she argues. For one, the workforce is nowhere near as diverse as the students it educates. As a result, the “professional knowledge base” for what makes a good teacher is “racially biased” and “shaped by white middle class women,” Ball said. The teacher workforce is built to accommodate a high rate of turnover, because a huge demand for teachers is “an economic reality,” and historically, women had to leave the teacher workforce when they were pregnant, she added.

Improving the teaching profession, Ball said, will involve addressing a “legacy of benign neglect.” Many enter the profession with “no idea what they’re doing,” she said. “If you can’t learn to read in first grade, that is a serious case of malpractice. You will not catch up ever. We need to learn to think of that as high risk for children. … We often say my first year teaching was a wreck. What if airplane pilots said my first year is a wreck?”

The recent movement to enforce tougher teacher evaluations, Ball said, is a “cleanup act” for the lack of solid and coherent teacher training. It’s a “slightly peculiar way to secure high-quality work,” she said.

Entry-level teaching must be the focus of any improvement effort, Ball said, because most teachers are inexperienced and say they feel unprepared. Potential solutions that have been raised are greater selectivity, better teacher induction programs, tougher evaluations, and smaller schools. But that’s not enough, Ball said.

“What we actually have to do is prepare a system that helps beginners be responsible in their first year,” she said. “There’s no system. … There’s no common agreement about what people have to know or be able to do to be able to enter the classroom.” While some turn to teachers’ standardized test scores as a mark of selectivity for the field, those scores only measure content knowledge — not teaching ability. Beginning teachers, she said, must be judged to meet the standard of being “safe to practice.”

That’s why she’s spearheading an effort to address these problems by building “a professional-practice curriculum” for teachers; offering careful, supervised and structured practice to make sure teachers can do the work; and setting performance assessments as a bar for entry to the profession. Ball described this approach as both “top down” and “bottom up.” She is partnering with the Educational Testing Service to build the assessment, which will pilot in two states and one urban district in each state. So far, she has raised $12 million to fund the effort, but expects the school districts will be able to eventually fund the program on their own.

“This is not easy,” Ball said. “But I’m not optimistic that any other thing alone will achieve the goal [of having a consistently high-quality teacher workforce]. Neither will this … but without allowing teachers to be prepared, we won’t get it any other way.”