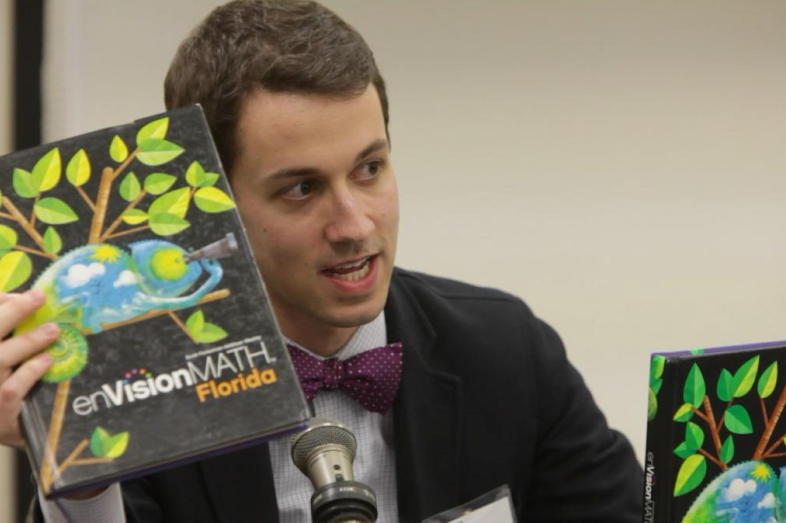 Textbooks and Math Standards Have Little in Common

EWA recently held a seminar on STEM education and student skills at the University of Southern California. We asked some of the reporters who participated to contributes posts from the sessions. Today’s guest blogger is freelance education journalist Brenda Iasevoli. You can find out more about STEM education and also about the Common Core State Standards on EWA’s topic pages.

“It is a sham,” said William Schmidt of the Education Policy Center at Michigan State University. “These snake-oil salesmen run the country and tell all these poor districts and teachers that the books line up. The yellow stamp on the front has nothing to do with the substance within the book.”

The Common Core State Standards, released in 2010, describe the skills students should master at each grade level—from kindergarten through high school—in math and language arts. Forty-five states and the District of Columbia have adopted them. Textbook publishers have been scrambling to provide content aligned to the new standards ever since.

But they’re not doing a good job, according to Schmidt, who presented his research at an Education Writers Association STEM seminar in Los Angeles in February. He analyzed 50 textbooks that are used by about 70 percent of U.S. students and are supposed to be aligned to the Common Core.

“The Common Core textbook basically includes almost all content that was already in the Florida textbooks,” said Polikoff.

Almost all teachers use textbooks. These books determine what teachers teach and how they teach it. Polikoff and Schmidt criticized textbooks for weak quality, lack of depth and excessive length. Other countries have 30-page math texts; the U.S. has 800-page texts.

Schmidt didn’t blame the teachers: They’re just doing what they’re trained to do. But Schmidt said he worries that if instructors continue to teach in the same way, covering too many topics too quickly, kids will continue to fall further behind.

“If we keep teaching—fractions, for example—to very little depth, kids aren’t going to get it and Common Core will be blamed,” he said. For example, kids too often learn fractions, yet they never understand how the fractions are related to whole numbers.

So why are textbooks so poorly aligned to Common Core? Alignment would require major revisions, said Polikoff, and publishers simply are not up to the task.

“I would just say it a little more crassly,” said Schmidt. “[Textbook publishers] don’t want to spend the money.” He thinks publishers have brushed off the Common Core as a fad that would soon go away.

We may not see Common Core standards reflected in textbooks anytime soon, but Polikoff said some online content holds promise. He cited some websites that are partnering with districts—Betterlesson.com and Sharemylesson.com—to bring Common Core lessons to classrooms. “I would trust these places more than I would trust traditional publishers to be moving toward getting this right.”

Schmidt said he tells people not to waste their money: Wait until a real Common-Core-aligned textbook becomes available. “If it truly lines up, it won’t look like this,” he said, holding up a thick math textbook. “In fourth grade, it should be a 100-page book and be much smaller. Unless you see something like that, don’t believe any of the rest of this.”