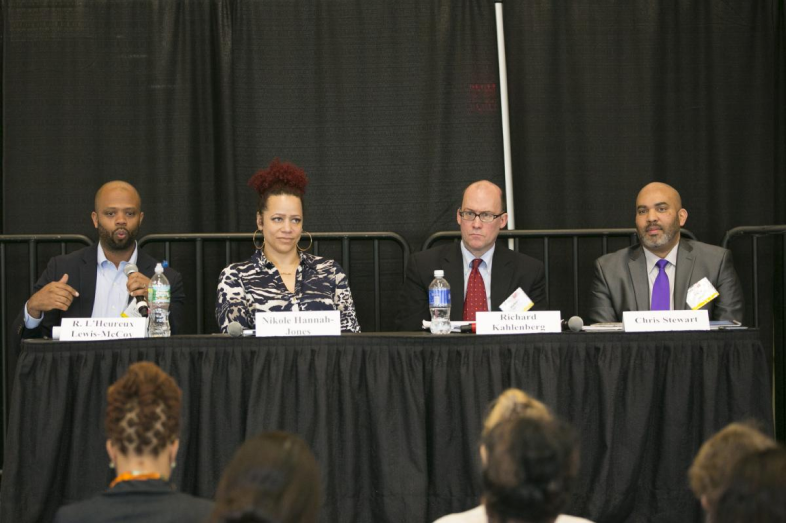 The Complexity of Covering School Segregation

The complexity around covering issues of segregation was in high gear in June when investigative writer Nikole Hannah-Jones documented in the New York Times magazine her family’s tough decision on where to enroll daughter Najya.

The article came a month after she discussed the deliberate and structural segregation she sees in communities around the country during the Education Writers Association’s National Seminar. Hannah-Jones urged journalists to hold accountable public officials and communities that allow this to happen.

Her recent article about her young daughter’s experience in New York City’s public school system did just that, and started conversations across the country about how to desegregate schools – and whose responsibility it is.

Hannah-Jones, who is African American, decided to enroll Najya in a low-income school where more than 90 percent of students are black and Latino.  A concerned journalist and concerned mother, she decided that to truly integrate schools, parents should become a part of the solution, which requires “a surrendering of advantage.” She argues that equality can’t happen unless more middle class parents like herself are willing to enroll their children in segregated, often under-resourced schools.

“This sense of helplessness in the face of such entrenched segregation is what makes so alluring the notion, embraced by liberals and conservatives, that we can address school inequality not with integration but by giving poor, segregated schools more resources and demanding of them more accountability,” she writes.

At the EWA seminar in Boston in May, she put it more bluntly.

“What we know is that segregation has never worked for black kids for one day in this country. The notion that suddenly we’re going to figure this out and do this shit right, I think, is very naïve,” she said. “We are not providing access to full citizenship when we are separating the most marginalized. I chose to put my kid in a segregated school, but every other kid has no choice.”

But Chris Stewart, the director of outreach and external affairs for the nonprofit communications organization Education Post, is skeptical that integration is a silver bullet that will help black and Latino students. He advocates instead for fostering education that is culturally sensitive to black students’ needs.

Stewart said he used to be an advocate for integration, but changed his mind after negative experiences as a Minneapolis school board member. When the board tried to redraw school boundaries, he said, it opened his eyes to the entrenchment of white attitudes toward black students and schools.

He now believes there are downsides to integration – calling it “akin to cultural death” – and that it’s not what all minority families are looking for.

“I think that there is a minor obsession with this issue as a silver bullet of sorts. … It’s not a universal idea within black thought that integration is an end goal,” Stewart said. “The better question is, How do we educate black children? How do kids learn and where can they learn, not how can we get more people of color in proximity to white people.”

R. L’Heureux Lewis-McCoy, the author of Inequality in the Promised Land, said during the EWA panel that he recognizes the disparities that come with segregation and knows that schools serving mostly poor, black students often lack the  resources of predominantly white schools.

But he said integration might not solve the problem. Often, black students still receive an unequal education in ‘integrated’ suburban schools, according to Lewis-McCoy’s research on one desegregated school district. Black students were disciplined more and white parents were aggressive about advocating to get their children into the classrooms of the better teachers, he found.

“For most of my life, the discussion of the civil rights movement and getting to those idyllic schools was the Promised Land. But it didn’t quite work out that way for the families that got there,” Lewis-McCoy said.

“Many white families are hoarding opportunities from other families,” he argued. “I found middle class and affluent white families organizing to limit access, taking the good teachers, in the principal’s office daily advocating that ‘my kid gets the good programs.’ Wealthy black families would rather pay their money and send kids to private schools.”

Fellow panelist Richard Kahlenberg, a senior fellow at The Century Foundation, said the definition of segregation needs to be more deeply explored. The biggest predictor of academic achievement is a child’s socioeconomic status, and the second biggest predictor is the status of the child’s classmates, according to Kahlenberg. He advocates using socioeconomic factors, rather than race, as a way to integrate schools.

The news media needs to remain skeptical of words, and instead watch deeds when covering segregation, said Hannah-Jones. Don’t accept policymakers’ words that their hands are tied and nothing can change, she advised.

“Actually show the way public officials and communities are making decisions and then show the harmful impacts of that. As journalists, we need to stop thinking about what is acceptable politically and start thinking about what should be. We don’t write about things that don’t seem possible,” said Hannah-Jones, whose work won both the 2014 Fred M. Hechinger Grand Prize and a first prize in EWA’s 2015 National Awards for Education Reporting. “Schools are not just about test scores; they’re about citizenship and how you come to think of yourself as a citizen of this country. We are not providing access to full citizenship when we are separating the most marginalized.”

Stewart described the “misgivings of the local press” when the attendance zones were redrawn in his school district in Minneapolis – and how it shaped the narrative of segregation in that community.

“They didn’t actually play out the drama for the public and call them on their crap. The stories in the paper more reflected the parents who were resisting than the truth of the situation,” he said. “Who is going to tell people the reality of what the politics are?”

Lewis-McCoy suggested that too many stories about segregation focus on white families who oppose it instead of minority families who are affected the most.

“Which voices get lifted and which are silenced?” he said. “Black folks have been dealing with these issues, but from Brown (vs. Board of Education) forward, a full discussion of what blacks’ needs and desires are has been silenced.”