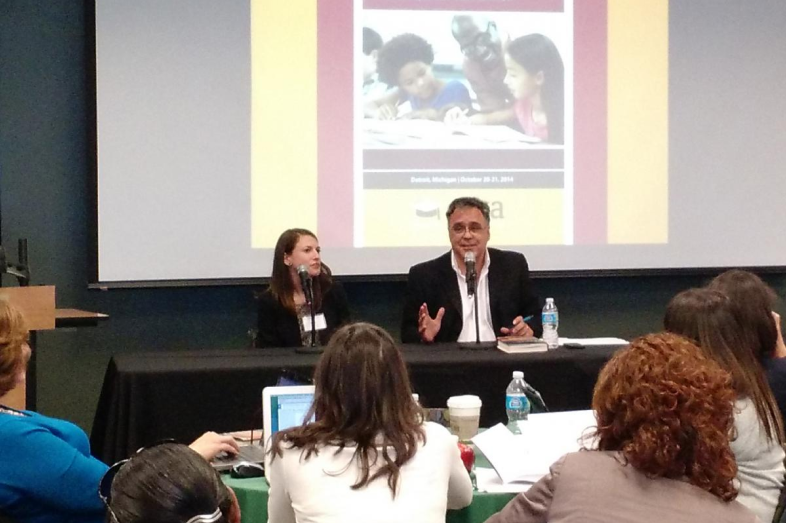 ‘The Teacher Wars’: Everything Old Is New Again

“We’ve been fighting about teachers for 175 years,” said Goldstein at EWA’s October seminar on teaching, held in Detroit. At the event, Goldstein discussed her new book, The Teacher Wars, published in September.

One of the most contentious political sticking points in education is teacher tenure. Lawsuits are roiling across the country, with education “reformers” decrying the years and tens of thousands of dollars it takes to fire a bad teacher. Meanwhile, teachers’ unions say the lawsuits harm educators’ rights and due process.

The “caricature of the bad, veteran, lazy, tenured teacher” isn’t unique to the current political moment, said Goldstein, a staff writer at The Marshall Project, a nonprofit journalism organization. In writing her book, Goldstein said she learned that the idea that the teacher workforce needs a major overhaul has been around since the 1830s.

Other major movements, like today’s push for increased accountability and enhanced accountability systems, mirror the social efficiency movement during the Progressive Era in the United States, she said. This movement essentially said that schools were vehicles for preparing children for college and career, and that schools should be evaluated based on how well they’re able to prepare children.

Today’s parent-trigger movement — which has allowed parents to force a change in campus leadership and operation, such as converting to a charter school run by an independent operator – might seem like a revolutionary idea, as well. But it echoes experiments with “community control” that unfolded decades ago, Goldstein said. For example, a group of New York City teachers famously went on strike in 1968 after a community-controlled school board fired a group of educators.

Even the most polarizing figures in the education policy world have their predecessors who embodied all the same ideals, she said.

During Goldstein’s discussion, USA Today reporter Greg Toppo named some of today’s most talked about education leaders and asked Goldstein to match them with their historical counterparts.

Beecher thought women should be public school teachers, Goldstein explained. And she wanted to recruit young, elite, East Coast girls for five weeks of summer training (“Sound familiar?” Goldstein asked) and send them to one-room, frontier schoolhouses in the West. It was a forerunner of Teach For America, Goldstein said.

Goldstein said that William McAndrew, Chicago’s superintendent of schools at the start of the 20th century, was very interested in using student data to evaluate teachers. McAndrew, like Rhee, had a “missionary-like zeal for firing bad teachers,” Goldstein said. He was a firm believer in the fact that the education system wasn’t about protecting adults: It was about promoting student achievement. And the teachers’ union hated him, Goldstein added.

The co-founders of KIPP charter schools, Mike Feinberg and Dave Levin, have promoted strategies reminiscent of the ones used by Anna Julia Cooper, Goldstein said. Cooper was a turn-of-the-century African-American feminist and educator in Washington, D.C. She believed in rigorous liberal arts curriculum and college prep for her students while maintaining strict disciplinary policies.

And Bill Gates is reminiscent of Andrew Carnegie, the steel tycoon and philanthropist during the late 19th and early 20th centuries who also worked with educators and policymakers to influence schools, Goldstein said.

But, like Gates’ work, not all of Carnegie’s philanthropic efforts received widespread praise.

“It was truly a partnership between philanthropy, government, and educators on the ground – with, I think, some positive and some quite disturbing implications,” she said.

What stories would Goldstein like to see other education reporters write?

She noted that the percentage of teachers of color is dropping in some major urban areas, and there’s a lack of data that ties student outcomes to the trend. While alternative teacher prep programs are more successful at recruiting teachers of color, the programs are small and aren’t totally filling the need for more teacher diversity, she said.

Goldstein also said she’s interested in the push to make teacher colleges and training programs more academically selective on the front end. In some rural regions, there are teacher shortages and programs have lowered their standards for aspiring teachers. Some students are getting into the programs with just a GED, she said.

“I think we can all agree that’s not ideal,” Goldstein said. “I would love to go to a rural region where there’s a teacher shortage and figure that out.”