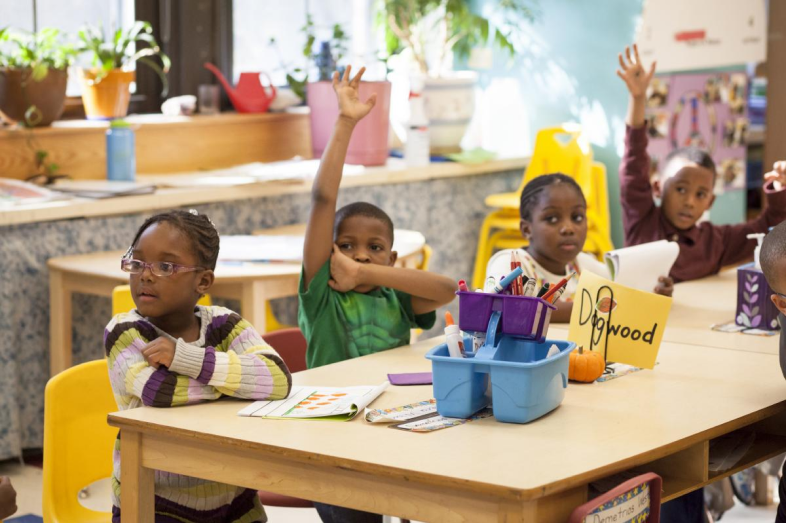 Urban education leaders crammed a marathon of Chicago’s public education woes and wonders into a 45-minute session (more akin to a 5K race) at the Education Writers Association’s recent National Seminar in Chicago.

Sara Ray Stoelinga, the director of the University of Chicago’s Urban Education Institute, joined colleague Timothy Knowles for a breakfast panel titled “10 Lessons to Take Home From Chicago” at the EWA event.

Linda Lenz, the founder and publisher of the online publication Catalyst Chicago, moderated the panel discussion, which explored how local stories informed national ones — from Chicago Public Schools’ (CPS) $1 billion structural deficit to statewide participation in a national movement to opt-out of high-stakes standardized testing.

The panel didn’t get into proposed solutions to the CPS deficit, though Knowles did say Chicago Mayor Rahm Emanuel disagreed with a suggestion from Gov. Bruce Rauner to have CPS declare bankruptcy. (We’ll stay out of that, for now.)

Here are some highlights from the conversation:

Even as the federal Elementary and Secondary Education Act (ESEA) remains in legislative limbo, debate centers around whether it should continue the accountability provisions of the existing No Child Left Behind Act (the name for the 2001 rewrite of the ESEA). Meanwhile, the U.S. Department of Education’s Race to the Top program requires that student test scores be included in teacher evaluations.

The question is whether the new law will hold to that.

Knowles, the chairman of the University of Chicago’s Urban Education Institute, said Chicago is in standby mode, waiting for the ESEA reauthorization and to see how the implementation of the Common Core standards — learning benchmarks for students in English/language arts and math — play out in city schools. Given those changes, some argue teacher evaluations should not be linked to student test scores for at least two years. Others say make it four, Knowles added.

She spoke mostly about factors she thinks are best indicators of how charter schools will fit in the overall picture of public education in the future.

The state’s General Assembly passed its charter law in 1996, allowing for 45 charter schools —15 in Chicago, 15 in Chicago suburbs and 15 down state. The law set a “very high bar” for the 45, and a lot of charters were rejected, Stoelinga said. And as a result, charter schools in Illinois looked “somewhat better” than traditional public schools.

Nationally, the Obama administration called on states to remove caps on charters in 2009, and 18 states did so between 2010 and 2013. That meant more space and opportunity for charter schools to be created, Stoelinga said.

The more interesting change, she said, is that teachers at some 12 percent of charter schools nationally are part of unions. One third of them opted to be part of the unions and weren’t required by state law. Chicago members of the American Federation of Teachers reported this is one of the first times they are drivers in the fight for unionization.

Stoelinga called for greater transparency around charter schools, in response to a reporter’s question about blocked access to specific charter school data.

“We cannot understand what’s myth and what’s reality about charter schools until we have the data ready,” Stoelinga said.

Knowles said there’s “a very interesting set of political bedfellows” regarding testing and specifically opting out of Common Core-aligned testing.

“There are people who think Bill Gates singularly wrote the Common Core in his basement,” Knowles joked. (The Bill & Melinda Gates Foundation provided major funding to support the development of the standards.)

Others think it’s a federal curriculum conspiracy threatening to take away local control. “And there are people who legitimately think we have gone testing wild in our country,” Knowles said.

In Chicago, students take Northwest Evaluation Association assessments, tests in the Partnership for Assessment of Readiness for College and Careers and other diagnostic exams.

Knowles said finding a midpoint between too much testing and not enough should be the focus.