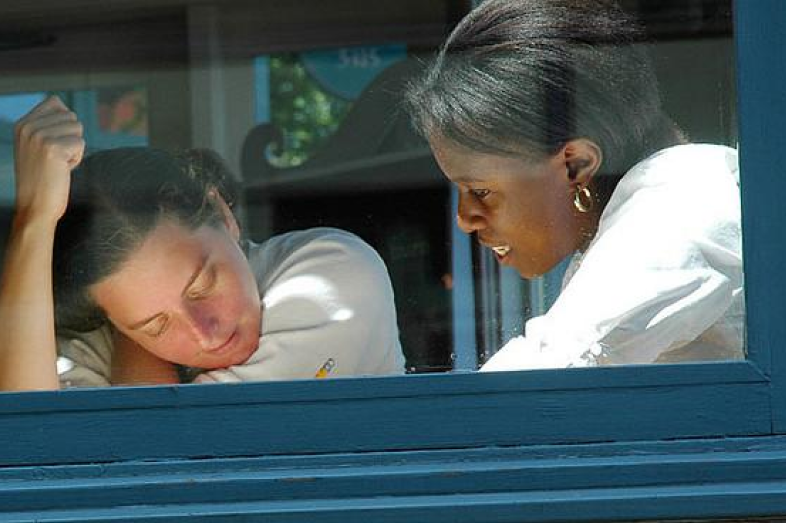 With opposition to the new Common Core State Standards and the assessments linked to them reaching a fever pitch, advocating for better tests seems like an unpopular proposition. But what if U.S. students took fewer tests that measured their ability to understand academic concepts far more deeply than current tests permit?

A growing chorus of scholars, including several who spoke at an Education Writers Association seminar, is calling for just that: fewer but harder tests that go beyond the standard multiple choice model, ones that ask students to answer open-ended questions,solve tougher problems and interpret harder texts.

“We could get the benefits of higher-quality assessments and spend less than we’re spending today,” said Linda Darling-Hammond, a leading professor of education at Stanford University, during her presentation Tuesday at EWA’s seminar on tests, Bursting the Bubbles: Reassessing Assessments. “We’re just not spending it in ways that are very optimal for promoting deeper learning.”

If the quality of tests are a reflection of how much students are expected to know, the standardized assessments of the No Child Left Behind era have missed the mark on measuring students’ ability to process complex knowledge, some research suggests. A recent RAND Corp. study of 17 state standardized tests found that 2 percent of the math questions and 21 percent of the English Language Arts questions assessed students on higher-order skills. Several other studies have come to similar conclusions.

Other researchers point to the disparity between student achievement on conventional standardized tests and on the nation’s gold standard for gauging student knowledge, the NAEP tests. While many states posted gains over time on the standardized tests, those results weren’t captured by NAEP scores, suggesting to many analysts that conventional state assessments are far easier for students than the tougher NAEP tests.

“We test students almost exclusively with multiple choice, which is not done in any other country,” Darling-Hammond said.

Newer tests on the horizon appear to test students on more rigorous concepts. A pair of UCLA researchers in 2013 found that assessments tied to the Common Core State Standards measured students on deeper-learning skills at much higher levels than previous state tests. But work done by Darling-Hammond and others show the PARCC and SBAC assessments tied to the Common Core lack the questions that really examine how deeply students can apply, analyze and evaluate what they know. (Still, Darling-Hammond sees the assessments as a step in the right direction).

While most U.S. tests stop at just determining what students know, tougher assessments like the International Baccalaureate model measure what students can do with the knowledge they’ve already acquired. The Advanced Placement exams also stand out for measuring deeper learning, as does the Program for International Student Assessment (PISA), an internationally administered set of tests.

Darling-Hammond argued assessments that are more challenging won’t necessarily cost more than what most states issue today. In 2010, she calculated that the range states pay per pupil for standardized tests stretched from around $10 to $100, with the average coming in at $25. That amounts to less than one-half of 1 percent of what it costs to educate each public school student in the United States. A Brookings Institution report released in 2012 produced similar figures.

“It’s a teeny tiny allocation, given how much weight we put on tests to make decisions, because we’ve also piled on stakes to our tests, far more than any other country,” Darling-Hammond said. “But because all of that energy is also focused on boosting scores on the same low-quality tests, we’re not getting any bump in deeper learning out of them,” she added.

Assessments that challenge students to go beyond just stating what they know require more resources to grade the responses, though the costs do not jump considerably. For one, typical state standardized tests include a series of interim assessments and test materials that drive up the average from $25 to $50 per student. The Common Core-aligned assessments cost between $22 and $30, mostly because they eschew test preparation material. That estimate, however, doesn’t factor in the technological and infrastructure demands placed on schools to roll out these exams, University of Oklahoma assistant professor Deven Carlson told reporters. 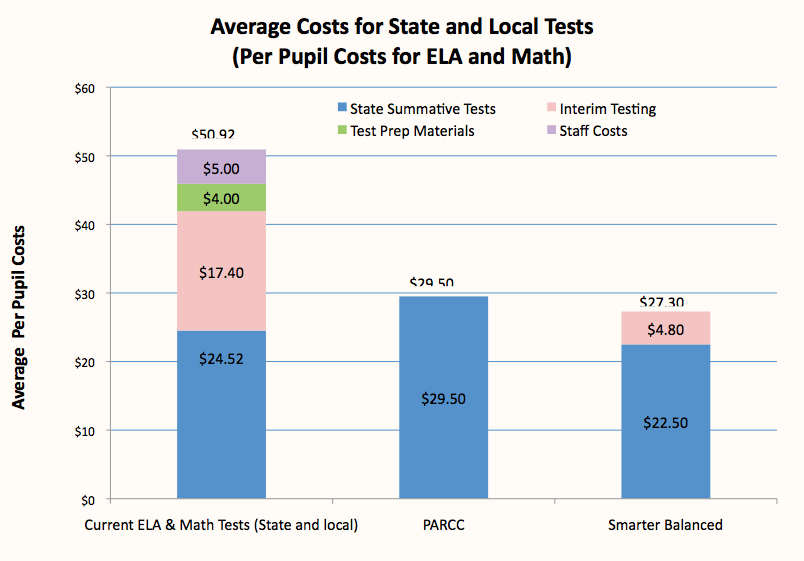 An analysis by Lawrence Picus, a scholar at University of Southern California, estimated that assessments that rely heavily on measurements of deeper learning would range from $30 to $50 per student. Tougher assessments tend to avoid multiple-choice questions, relying on open-ended prompts that challenge a student to gather evidence from a supplied text or use narratives to express a mathematical concept. Other assessments can go deeper, assigning students multi-month projects and graduation portfolios that run the gamut from oral defenses to in-depth investigations that rely on original data.

These assessments that can measure deeper learning are common in other advanced countries, but they’re gaining ground in the United States, too. Project-based-learning schools like Envision Schools in the Bay Area of California are one example. A handful of schools have joined the New York Performance Standards consortium, which calls for continuous assessments that are project-based. The Innovation Lab Network, operated by the Council of Chief State School Officers, is another deeper-learning initiative that’s partnered with several states, including California, Maine and Oregon. Its goal is to assess skills expected by the Common Core, with a focus on designing experiments, group collaboration and intensive self-evaluations.

But whether parents will welcome these tougher assessments is an open question. This week, one of the two Common Core assessment consortia announced their cut scores – benchmarks students need to clear to be considered proficient at the content on which they’re tested. A third to roughly 40 percent of K-8 and high school students are projected to be proficient in math and English Language Arts.

“Students who were being told that they were on track are now going to be told, ‘You’re not quite there,’” said Chris Minnich executive director of CCSSO, which runs the Innovation Lab Network and the Common Core standards.

And while tests before didn’t challenge students enough, Minnich said, the conversation in states where these Common Core-aligned tests are imminent will be, “Well, who decided this was the right thing for kids? Who decided that these test scores were actually what kids need.”

For states to expand deeper-learning techniques, they’ll likely first need to overcome the blowback from parents whose children are suddenly deemed unprepared for the challenges of college. Kentucky, an early adopter of the Common Core-aligned exams, largely prepared parents for the dip in student scores. New York, another early adopter, is hopeful it can recreate the accord the Bluegrass State reached with concerned parents. It’s a recipe as simple as it is complex: Convince the masses the Common Core is on to something good, and improve from there.