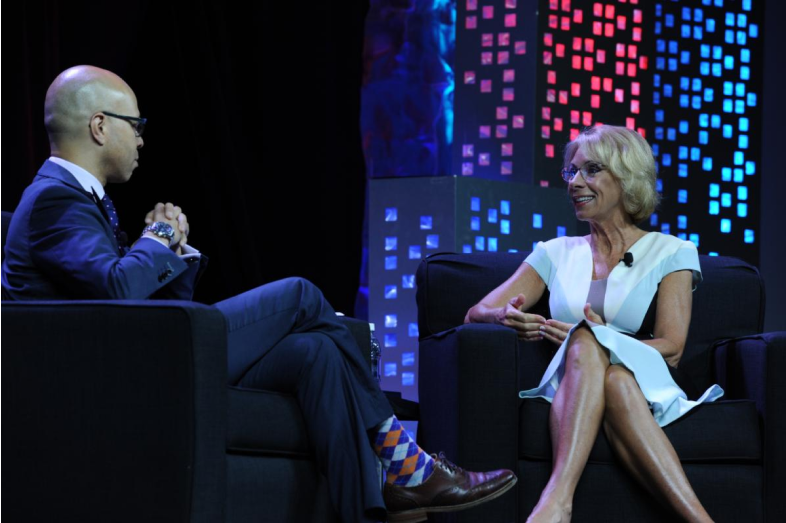 Thousands of charter school educators, leaders, and advocates gathered in Washington D.C. this week at a time of both great hope and palpable dissonance within the charter school sector.

In rhetoric and in its first budget request, the Trump administration has so far embraced charter schools and their expansion. But while many charter advocates are heartened by the administration’s support, the annual gathering comes at a tense and complicated moment, as Education Week’s Alyson Klein explains:

“On the one hand, charter advocates, who were pushing the administration to bolster funding for charter schools to $1 billion, have to be happy about the president’s proposal to hike charter school funding by $167 million, to $500 million.

But the rest of the budget is tough to swallow. Charter schools, just like traditional public schools, take advantage of many of the same programs that Trump wants to cut in his budget in order to boost funding for choice, including grants for teacher quality and after-school programs.”

DeVos: Charters Not a ‘Cure-All’

U.S. Secretary of Education Betsy DeVos addressed the National Alliance for Public Charter Schools conference Tuesday, reiterating her support for charter schools while warning that they are not a “cure-all” and that charter advocates run the risk of becoming “just another breed of bureaucrats.” For analysis of DeVos’ remarks, check out the coverage from Education Week, U.S. News & World Report, Chalkbeat, and The 74.

In addition to DeVos’ keynote, the conference brought together policy experts and charter school educators for dozens of panels, including sessions on the role of charters in promoting racial and ethnic integration, the promise and perils of virtual schools, and what policy changes may be ahead at the state and federal levels.

Crazy packed room for #NCSC17 panel on the Trump administration, Congress and charter schools with Jason Botel. Standing room only.

One hotly debated topic was the role the U.S. Department of Education under President Trump should assume in protecting the civil rights of students.

Michael Petrilli, the president of the Thomas B. Fordham Institute and a former education official in the George W. Bush administration, predicted that the department’s Office for Civil Rights would return to its role of responding to complaints rather than proactively issuing guidance and putting schools “in a position of having to defend their policies to the federal government,” as he described it.

The Trump administration rolled back some protections for transgender students in February and Petrilli expects the Obama administration’s guidance on student discipline to see the same fate.

Meanwhile, in communities across the country, charter schools are expanding their role in early childhood education, said Jack McCarthy, the president and CEO of the charter network AppleTree Institute, in another session. While charter schools have traditionally focused on serving K-12 students, a growing recognition of the importance of children’s earliest learning experiences has spurred some charters to find ways to provide pre-K for three- and four-year-olds.

This is somewhat unchartered territory for the charter community, McCarthy added, and one that comes with significant financial and logistical challenges. Yet even in states with limited public funding for pre-K, charter schools are finding innovative ways to promote early learning through federal grants and partnerships with local child care providers, including Head Start, he said.

Meanwhile, there is a growing emphasis among charter schools – as with district-run public schools — in helping students develop the social and emotional skills they need to thrive in and beyond the classroom. The founders of charter schools in Gary, Indiana, and Detroit explained how they’ve worked to integrate character development into every facet of their schools.

At Detroit Prep, for example, students reflect on their behavior at the end of each day with “glows and grows”, recognizing where they exhibited positive character traits and areas where they need to improve, said Kyle Smitley, founder of Detroit Achievement Academy. And at Phalen Leadership Academies in Gary, school leaders are training their staff to ask “what do you need?” when a student acts out, rather than responding with reprimands that fail to get to the root of the student’s behavior, said Earl Phalen, CEO of Phalen Leadership Academies.

Coming out of the conference, here are some issues journalists might explore in their own communities:

For all the latest news on school choice, be sure to visit EWA’s Charters & Choice topics page.