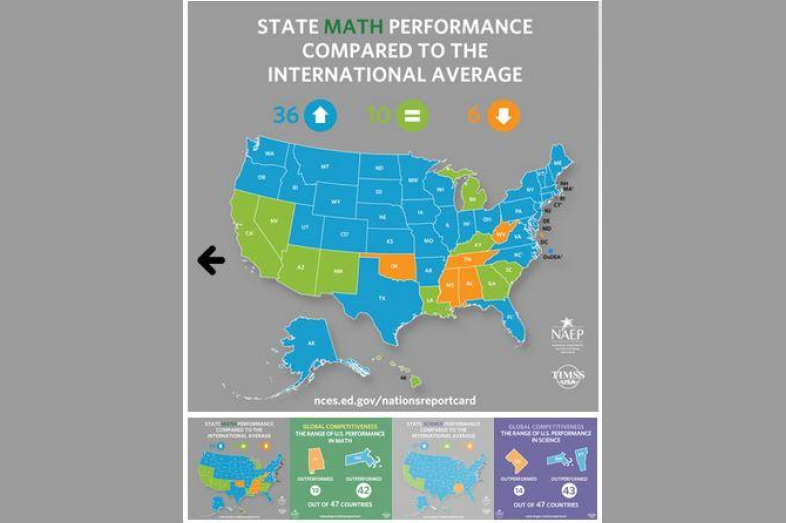 Think U.S. students are woefully behind their international peers? A new cross-country study shows American eighth graders in most states test above average in math and science when compared to students abroad.

Massachusetts, Minnesota, and Vermont lead all U.S. states in science performance, besting 42 of the 47 countries that were evaluated in the study. Students in 36 states were above average in math, while those in 47 states reached that threshold in science.

The federal report was prepared by a research arm of the U.S. Department of Education, which used a highly respected national exam to predict student test scores on an international test in which many leading countries take part.

The news contradicts the narrative of U.S. educational decline many policy groups have promoted by pointing to lackluster results of U.S. students on international tests.

Read about the findings below.

The Huffington Post: ”In science, Mississippi and Alabama look a lot like Kazakhstan, D.C. is close to Bahrain, and Massachusetts edges out Taiwan.

“The study is the first to show where U.S. states would rank on the international exam Trends in International Math and Science Study, or TIMSS. Students in most U.S. states don’t take TIMSS, so U.S. statisticians approximated results using the National Assessment of Educational Progress, the largest U.S. comprehensive standardized test.”

Associated Press: ”Mark Schneider, vice president at the American Institutes for Research and a former commissioner for the National Center for Education Statistics, said one of the most disturbing results from the study is the low number of “advanced” achievers in the United States compared with other countries.

The New York Times: ”Paul E. Peterson, the director of the program on education policy and governance at Harvard and a fellow at the conservative-leaning Hoover Institution, said the study provided less good news than people might think.

“He pointed out that the pool of countries taking the math and science exams included many developing countries, and that several industrialized nations, including France, Germany and Denmark, did not participate. ‘So if you really want to compare the U.S. to the developing world, then we do look good,’ Mr. Peterson said.”

The Washington Post: ”But Hal Salzman, a professor of public policy at Rutgers University, said hand-wringing over international tests is misguided.

“’What’s really peculiar about the whole test-score hysteria is that they use it as a proxy for the U.S. ‘competitiveness and innovation’ as though we don’t have actual measurements,’ said Salzman, an expert in science and engineering labor markets and the globalization of innovation. ‘The country continues to lead on innovation, economic performance and all the results that these things are supposed to indicate.’”

Education Week: “Before the linking study was undertaken, TIMSS results showed only how the United States overall—and nine of its states that chose to participate as entities in TIMSS­—compared with the math and science performance of 40-plus countries, provinces, and other jurisdictions. The linking process enabled a fuller report showing the projected performance of all 50 states, the District of Columbia, and U.S. Department of Defense schools.”